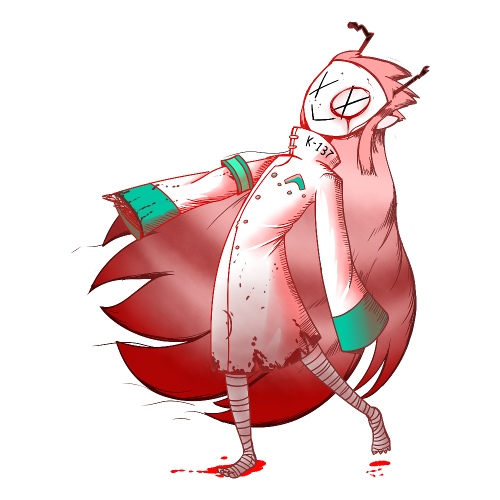 “Who doesn't have their share of secrets eh? Isn't that perfectly... normal Xv(X).” — Alex 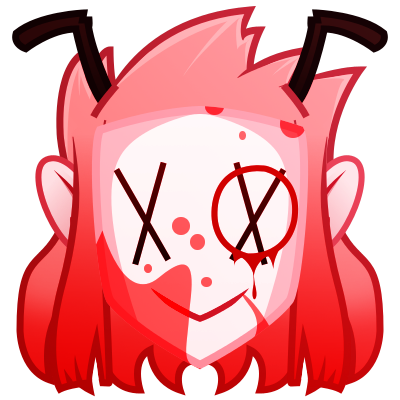 Job: Researcher / Frycook
Likes: Salt, Meat, Father's day, Revenge, The morning after a terrible storm
Dislikes: Most other notails, Unsolicited violence, The taste of gauze
Notable contributions: Being a sterling example of an entirely respectable, conventional notail, of their class.

K-137, aka Alex, is a decidedly normal notail with entirely ordinary notail features. She is of average height for a notail, and possessed of a slim build. Alex has pale pinkish skin and long pinkish-red hair, and is slightly eccentric, to an extent that is in fact, perfectly normal. Her antenna are rather short, and somewhat fake looking, many have thought they were in fact entirely fake and that she did not have any. This is not the case.

She wears attire not out of place with her class or proffession, a simple science coat, with teal cuffs, and her name written out on the collar. On her right arm she wears a teal armband that displays nothing in particular. Most of her body is covered in bandages, which are not to be construed as alarming.

K-137's face is a decidedly basic, plain white design, slightly curved at the top, and curving down into a point at the bottom. The eyes are a crossed out, with the left eye being circled in red ink, which is sometimes seen to 'run'. Finally, she has a fairly simple, pointed mouth at the bottom.

K-137 is an entirely charming and polite young lady, which is admittedly somewhat out of the ordinary for a notail. They are largely concerned with being as typical and "normal" as possible, well as normal as a K-class can really be anyway. As such while they display the typifying curiosity of their class, this is often curbed by their polite manner and lack of desire to appear overly unorthodox.

To some, these attempts at normalcy come across as conspicuous, a deliberate attempt to appear unassuming. That would of course be implying she is insincere, which is certainly not the case.

Her general continence beyond this is reserved and unassuming. She's slow to get close to people, or speak up in a non-professional context, or engage in any manner which would put her on the spot, even in a private setting where there are no judgmental eyes that suspect her of anything but being ordinary.

Alex doesn't care much for discussing her childhood, when questioned on the issue she often brushes off questions with vague answers such as "I was washed out of the system" or "I was discarded" and similar such answers.

Nevertheless, at some point she ended up in the care of a K-class notail, who, in exception of convention, decided to raise her as his "daughter". She lived like this for some sixteen years, but on that year, apparently on her birthday* something happened which required her to leave her father's care.

After this event, she elected to "Bum around the cosmos". She wandered about, planet to planet, doing all of the things perfectly ordinary and respectable K-Class notails are meant to do, such as research things, test things, stick her nose in business that wasn't her own.

To those that felt inclined to look into her business an unsurprisingly small number it could be observed that there was seemingly some semblance of a pattern to where she wandered during this period, a connecting thread, but alas, if there was some higher cause, she refused to tell anyone.

Jekyll: Alex is a profoundly normal, and entirely fine girl. But some uncorroborated reports hold that she is not all that she seems, and indeed, there might be something strange and concerning about her. If you have anything to report on this matter, contact you local Cosmosdex branch office.

• When she's not involved in other projects, she is often seen moonlighting as a cook at a Galaxy Burger (Home of the Galaxy Burger) location, "It pays the bills Xv(X)" She comments.

• She is often found on derelict ships evidently the only survivor of whatever calamity caused the ship to become adrift in the first place. Curiously enough she is rarely listed on the manifest as having boarded these ships, though occasionally she is referred to as hitchhiking on them.

• Alex has the poor luck to often end up in locations relatively soon after a massacre has occurred. She has no idea why this is, and refuses to comment on it.