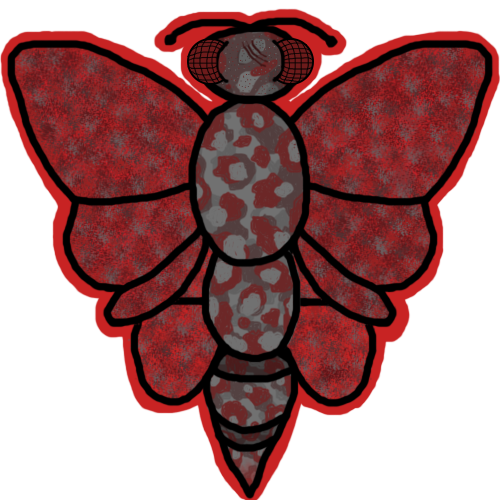 “I tried to warn them that hunting the butterfly was folly. Thought I had gone mad, they did. So off they went, overconfident they could kill what they thought was a pathetic insect. They never came back.” — a survivor's warning about butterflies

Attack Method: Ambush the target(s), then move from target to target and incapacitate them with its poison. Targets things that harm its wings before anything else.

The butterfly, despite its innocent sounding name, is actually a larger, more terrifying and deadly version of its more innocent counterpart. At its tallest, a butterfly typically stands at about 7 feet tall, and its back is a mixture of dull greys, which allow the butterfly to camouflage itself when it rests. Its front half is a mish-mash of greys, browns, and reds, while its insectoid eyes are always some shade of crimson. The inside pattern for their two sets of wings also tend to follow the same color pattern for the front half of its body, however, the colors are scattered about the wings in a way that resembles a splatter painting.

Butterflies have a beak-like mouth that is capable of tearing through flesh, and a stinger which at the end of its thorax which is capable of incapacitating a sentient creature, if the stab from the stinger itself doesn't kill it. It has no other limbs other than its wings and stinger, but that doesn't stop a butterfly from being deftly mobile, an advantage the butterfly uses in its battle tactics. The butterfly itself is covered from head to stinger in a resilient carapace, and even its wings share some of that carapace. The only weak spots in a butterfly's carapace are at the joints where the wings connect to the main body, which allows for the mobility the butterfly needs. If the wings of a butterfly are somehow shot off of it, it is reduced to little more than a twitching mass, and can only attempt to sting anything that gets near it, making it a much easier target.

Butterflies are solitary creatures, only searching for another butterfly when trying to mate. Butterflies are raised from eggs, which typically take about 6 months to hatch. These eggs are guarded fiercely by the female, and anything that even gets close to the butterflies nest is attacked. When the young hatch, they are left to fend for themselves, and of the hundred or so hatchlings, only a handful ever manage to make it the 5 years needed to become fully independent.

Fully grown butterflies are aggressive hunters, and always attack when threatened. This aggression makes butterflies a heavily hunted populus, but even then, only few can say they survived an encounter with a butterfly, much less who haven't suffered some kind of physical and/or mental damage because of it. As a testament to how strong some butterflies are, there are even stories of butterflies going toe-to-toe with small fighter craft squadrons, and even winning a small portion of those battles. As such, butterflies have made it on some of the kill on sight laws alongside stellar drakes.

Butterflies often take frequent rests like a cat does, and can be active in both the day and night, though primarily are active during the nighttime. When they do this, they curl up into a ball upon the ground, with their dull grey backside facing the sky. This way, they appear to other creatures as an oddly shaped rock. This tends to mislead some creatures, which then proceed to rest on said "rock." Needless to say, this aggravates the butterfly, and that creature will end up receiving several stingers to the chest, falling dead where they stand. If any other creatures are nearby, they will also receive the butterfly's full wraith.

Poisonous Stinger: Butterflies have a highly dangerous venom which is capable of incapacitating most sentient species, though some particularly hardy individuals are capable of withstanding the average poison dose. Given enough stings, however, and they will also become paralyzed.

• Some rich individuals have tried to tame a butterfly before, though each attempt has always ended in a massacre of both the individual, their handlers, and their guards.

• A butterfly once snuck onto a large cargo transport before it left for another planet. More than half the crew was killed before anything could be done the stop it, and the ship was littered with the corpses and blood of those who were unfortunate enough to fall to the creature.

• Some shifty individuals have been known to harvest and repurpose the venom of a slain butterfly, often using it to render a target immobile so they can be more easily kidnapped and used as a ransom. This toxin is extremely expensive, and is only sold in highly secretive black market dealings, as the possession of the toxin is highly illegal.