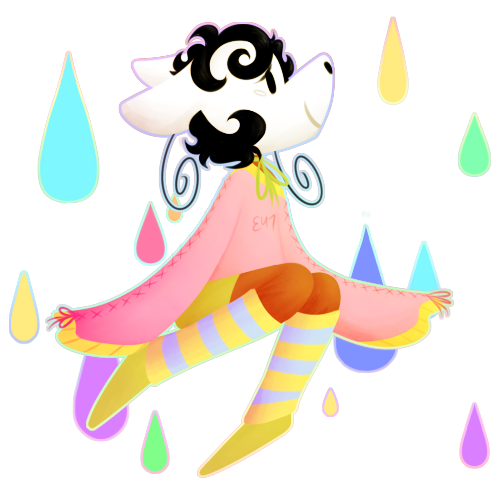 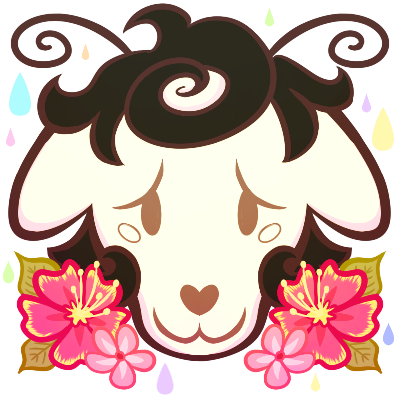 Job: Notail Leader of the E-class
Likes: Affection, Attention, Soft things, Soft colors
Dislikes: Being ignored, Being alone
Notable contributions: E-47 is the current leader of all E-xplorer class notails, and is in charge of notail operations on newly discovered planets, as well as first contact with new species.

A splash of color among their gray-clad peers, E-47 is instantly recognizable in a crowd by their typical brightly colored clothing alone. But this is not the only way they stand out; E-47 is incredibly short for a notail, made even tinier by the way they carry themself, and both their loose clothing and their wobbly, high pitched voice only serve to emphasize this fact. Their long antennas curl into a severe spiral shape, and are nearly always kept pointing downwards by their chin; this is not to say they always point down, however, as E-47 will on occasion perk them upwards as well, usually when with a large group of other notails. Overall, it is very easy for someone to mistake them for being much younger than they actually are; one of the only indicators otherwise is the “E-47” embroidered on all of their shirts, and even that is lost on people unfamiliar with notail class numbers.

They nearly never wear what is considered typical notail garb; instead, E-47 can almost always be seen wearing pastels and other soft colors, and tends to prefer “cutesy” clothing like oversized sweaters rather than plain shirts and pants with neutral tones. Notails tend to find this strange, but to others it can often come across as cute, if anything.

E-47’s mask is that of a smiling white dog with a heart shaped nose, its ears folded back, and its eyes full of tears. They almost always make a “qwq” expression, but on occasion will use “QwQ” as well. There does not seem to be a pattern for when they use which face.

For unknown reasons, E-47 never shows the palms of their hands, instead either letting their sleeves hang over them or else even going to the point of wearing fingerless gloves. If asked about it, they simply shrug and say it’s to help their grip and nothing more.

Everything one would expect from a class leader of one of the worst races in the universe, E-47 embodies the very opposite. While most notails hide their emotions and vulnerabilities, E-47 never tries to close themself off or distance themself from those around them; on the contrary, they’re a rather friendly person with an approachable air, and seems to enjoy talking to and meeting new people whenever they can. E-47 can be quite chatty, if a bit nervous and hesitant at times, and anyone speaking to them would find that they’re ultimately a shy, but sweet, person, to the point where many find it difficult to believe they’re truly a notail at all.

E-47 overall has a fundamentally sad air about them, as if they’re a kicked puppy just waiting for the next blow. They seem out of their element when speaking to other notails, as if they're trying and failing to live up to the stoicism expected of a notail participating in notail society, and seem somewhat relieved whenever this pressure is off them when they speak to a group containing no notails. The fact that they seem to have trouble relating to their notail peers only adds to the notion that they're different somehow; E-47 is very attached to people they’ve declared their friends, often showering those who show them even the smallest scrap of kindness in affection as if they're so unaccustomed to such a thing that every small gesture deserves them singing its praises. E-47 always looks just a little bit lost, a little bit scared, and a little bit sad, and the urge to protect them can be strong.

Overall, the biggest impression E-47 leaves on those who have a casual conversation with them is that they’re soft-hearted, sensitive, and just a little childish. Maybe a little naive, but ultimately harmless; someone deserving of understanding and compassion, not scorn.

As a result, E-47 was forced to either find a way to survive on their own, or die. It is not known exactly what happened in this time, and E-47 themself is mostly unwilling to elaborate on it; what is known is that they wandered frequently at this time, and went hungry often enough for their growth to be stunted severely, leaving them much smaller than most other notails.

E-47’s only comments on the situation are that they hated it, that they eventually grew tired of living such an unstable life, and that they finally sought a way out of it. Because their earliest memories - the memories of their life with their notail parents - were in their view their happiest, when they were 19 they decided to make their way to a notail-run planet and ask to rejoin notail society. They were told to apply, and after a while was allowed back in as an E-class.

Notails found them strange. E-47 simply didn't act much like one of them at all, and E-47 in turn found it difficult to relate to their peers. But the important thing was if they could do their job well, and that was something they excelled in. Although E-47 never went to the forest, and never learned some of the lessons the other E-classes did, they learned different ones that were just as, if not more in some cases, effective. And, despite everyone’s low expectations for some soft silly naturalborn who didn’t even know how to act like a proper notail, they succeeded; mission after mission, planet after planet, E-47 slowly gained renown for their E-xploration work, however unconventional it was.

It is unknown what made them do it, if it was even anything in particular, but eventually E-47 applied for their current position as E-class leader. Because of their effective, if unusual, work, they were given tasks to prove themself against the previous E-47, which they accomplished with ease. As a result, the old class leader was fired, and E-47 gained their position.

As a class leader, E-47 is constantly cloned and replaced upon death, but only as long as they continue to outperform anyone else vying for their position.

Let Sleeping Dogs Lie: E-47 is unusually empathetic and extremely perceptive, in that they are easily able to observe and understand the emotions of others and relate to them on a personal level in a way many notails find difficult. Overall, they simply exude the aura of someone trying their best, who means well and wants to do right by everyone; as a result it can be incredibly difficult to get angry at E-47, and even more difficult to stay angry at them.

• E-47 enjoys collecting souvenirs from the planets they travel to, and will gladly show a picture of their collection to anyone that asks. They claim to have an item from every planet their work has sent them to, but only travels with the most recent of their acquisitions.

• E-47 always seems to perk up when the word “honey” is mentioned around them, and then shyly duck their head once they realize whoever said the word wasn't talking about what E-47 thought they were talking about. This is because “Honey” was E-47’s name in childhood, but answering to it as an adult seems to embarrass them, especially since it being a relatively common word makes this misunderstanding happen frequently.

• The previous E-47 disappeared shortly after E-47’s promotion to class leader. When asked about it, E-47 simply goes quiet and says they “can’t believe he would ever do something like that...qwq” and does not elaborate further. 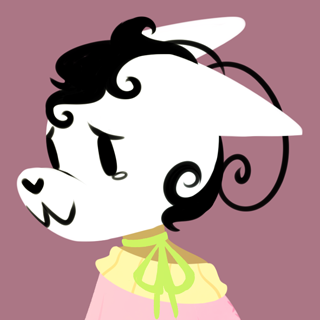 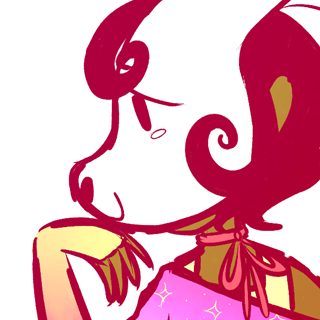 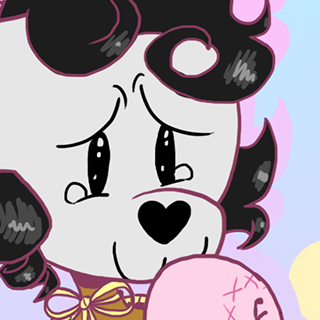