Fortunes Fiend / Tricks of the Mist 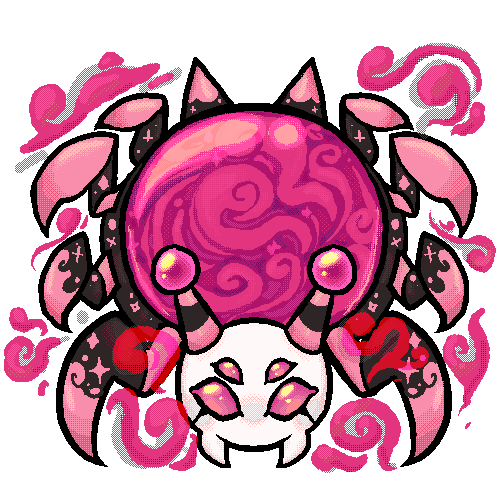 “Behold, gaze into the swirling stars of this creature, breathe in the prophetic fumes, and see what your future has in store for you!” — Notorious conman fortune teller Jackie Sparx

Attack Method: Mystal will first release a plume of hallucinogenic mist to confuse and disorient their opponent. They will then either bear into it with their legs or fangs to ensure its confusion and make their escape.

The mystal are arachnid creatures, with two sets of legs on the front and back halves of their body. They have four eyes and pronounced pincer-like fangs. Their most defining feature is the large crystalline sphere on their back, containing fluids and mysteriously swirling mists, which viewed through the crystalline shell, look almost prismatic and glittery.

These mists are comprised of hallucinogenic plants they eat and strain the mind alerting effects out of to contain in their bodies safely. They may expel this purified mind-altering gas as an attack or at the command of a trainer, creating confusion and susceptibility to suggestion in their targets. They have two spikes on both their head and on their back, the ones on their head each having a large circular orb of similar substance to their back spheres.

The mystal are fierce animals, quick to bear fangs, with a tendency for seclusion. They typically reside in swampy areas, feeding on plants and occasionally a smaller fauna that is unlucky enough to be caught in their midst. In recent years though, the domestication of them has been popular amongst the fortune-telling and scamming crowd. With mystal being seen as akin to crystal balls, their mists have gained the colloquial term of being "prophecy induing", which is a nice way of saying a purified assault on the mind.

More domesticated mystal will appear to be tamer, with less aggression around other fauna, and being seen as docile. This is more a tactic most trainers will induce to keep their stoic and mysterious appearance up, and can quickly switch on a dime to a ravenous beast at the allowed command.

Hallucinogenic mist: The gas which swirls around the crystal ball protruding from the mystals back is caused by their diet of hallucinogenic flora, from which they purify the nutrients from it using their special digestive tract and contain the harmful toxins within their backs. This may be expelled at any time if they have enough to induce confusion and in strong enough doses, illusions, which cannot be controlled by the mystal, but are more influenced by the victims state of mind.

• The mystals evolution seems to mirror that of the umorus, with both straining the hallucinogenic properties out of dangerous plants to use as a defense mechanism.

• Mystal love to swim, either carefully attempting to float along with the surface pressure or an all-out paddle in the pool.

• A mystal, when lacking plants to create its mist, will become noticeably more afraid and aggressive, even in captivity. This may be due to the fact that the affects of the gasses seep into the mystal in their normal state, creating a sense of withdrawal from the substance.