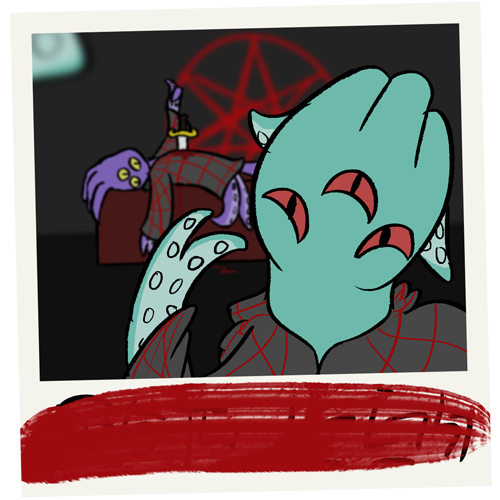 “It is painful to look into infinity. Perhaps this was a mistake and I will never truly recover. But this atlas is going to be baller.” — Cth'Lean cartographer, shortly before working literally to death on their magnum opus

Attack Method: Attack with ritual dagger, and hopefully release to the gods.

[Cultist] Neutral trait
This character believes in the strange, the arcane, the other. They are naturally drawn to fringe cults and strange beliefs, and may already be a member of several of these groups.
[Observant] Positive trait
This character notices things far quicker than most other types of characters. They are more likely to make observations about hidden passageways or certain special objects. They overall make better judgements than others.
[Overconfident] Negative trait
This character is too confident in their abilities and is not realistic about how dangerous or challenging something may be. They may take on tasks they cannot do, or put themselves or their team in dangerous situations because they think they can handle it.

The cth'leans dealt with any gods they were aware of quite often.

Gods: All of them

The cth'lean people were upright semi-amphibious cephalopods, with two arms and four legs. Their heads had three eyes on the front, and a beak on the top of their head, obscured by four to eight more tentacles, most commonly.

They did not have a true underwater breathing capability, but could remain underwater for nearly two hours without needing additional oxygen. Their skin would dry easily, but Cth'Leoth is a world with very high precipitation, and it was not generally an issue. Those spending a great amount of time working indoors would often take breaks to moisten up.

Their flexible and numerous appendages favored them wearing loose-fitting clothing, robes being the favored clothing to wear for most, usually dark in color, with a brighter highlight color along the trim, and often with specific flourishes off of this trim. My own robes, for example, carry a teal trim with curls around the hems. This traditionally would have been the color and pattern associated with the Order of Communal Comprehension. Most outfits worn by cth'leans represented in some way the religion they affiliated themselves with.

Culturally, the cth'leans valued knowledge over nothing else. Keeping a secret from somebody was considered a great insult, at least, not without divulging why it must be kept secret.

But after that was religion. There were thousands of religious orders, based around various values. Those determined to seek knowledge were, naturally, many of the largest and most numerous religions, such as my own order, or the Second Church of Aa'Rii.

Others, however, would be focused on the ideas of providing services to others, whether in spreading knowledge to those outside a specific religion, such as the Collegiate Temple or Wings of Literacy. Yet others would see a practical need in the world, such as farming or maintaining electrical networks, such as The Holy Growth or Ordo Electricia. Regardless of one's motivations or desires in the world, it would be achieved through organization and faith in higher powers.

As most cth'leans acted on a desire to benefit the greater good, some would regard their society as a socialist utopia, but perhaps obviously, as their society gave rise to the boog, capitalism was present. The many religions almost all held at least one useful artifact, or held special favor with their gods, which made their services particularly useful, or alluring to those from other orders. A concrete system of currency was formed to help manage favor, without resorting to unwanted recruitment from other religions.

Even before the development of sapient life on Cth'Leoth, the planet was almost a magnet for anomalous activity. Records of prehistorical activity is quite obviously sparse, but from what has been researched, it seems the strange shapes and activities of many of the organisms on the planet are derived from contact with anomalous materials.

Some of these materials contained writing themselves, which could not be understood by the proto-cth'leans, but when languages eventually were developed, they usually incorporated symbology and structure similar to that of writing on anomalies. The nature of the original source of these symbols seems to have had a transitive effect, as many visitors from off-planet have suffered mild mental or physical maladies while reading or listening to these original languages. Linguistic studies both from cth'leans while they were alive, and extraterrestrial researchers have determined that these languages were developed in such a way that the effects were present, but diminished, and that the cth'leans themselves had built up an immunity to its effects, through thousands of years of exposure.

Use of anomalies was not, however, merely restricted to its natural integration with language. Much like the proverbial obelisk, these anomalies granted knowledge, at a cost. The cth'leans were all willing to pay the cost, and right from the beginning of their recorded history were there records of experimentation with things they could not understand. While indeed, these strange artifacts were dangerous, they were also often very useful. An artifact causing excess limb growth for one cth'lean could regrow a lost limb when applied carefully to another. An artifact projecting a negative gravity field could prove fatal when one is unprepared for atmospheric entry, but with carefully studied effects, could prove very useful to those needing to work in high places.

As scientific research expanded, so did the ability to understand the effects of these anomalies. The godly effects upon the world would often be inexplicable under even an electron microscope, but often the effects could be completely reverse engineered, with careful observation of the precise effect they had on the world on a microscopic level. Hard light technology was developed by studying the structure of the beam emitted from a strange flashlight artifact. A simple atomic quirk discovered in many gravitational anomalies had led to useful levitating attachments becoming commonplace for everyday items. Breakthroughs in treatment of cancerous ailments, thanks to study of those affected by mutational artifacts. Not all anomalies could be explained or replicated with science, but studying the effects of many of them did wonders for scientific progress.

Many cth'leans were not beneath simply asking the gods themselves for assistance. The most accepted practice was to perform rituals to bless objects and create new artifacts, as artifacts generally had repeatable and predictable effects, after initial testing. A cth'lean with a desire to be blessed directly, or to be granted a single-use effect, was rarer and often ill-advised, but most often when it would be deemed necessary, it would be an event. Many members of the religion would be involved in the ritual, and an offering would be brought, as payment for the god's services. Most often valuables or livestock, but occasionally a member of the order would offer themselves to negotiate, understanding they would likely not return from these negotiations.

The suggested template titles this section as "subspecies," but the groups of cth'leans that were the most notably different were not considered any socially different by most. As previously discussed, the cth'lean hunger for knowledge had few limits. Amongst those with access to anomalous materials, it was rare to find one unaffected at all by its effects. Some, however, endeavored to dive deeper, and gain a more thorough understanding of these materials, despite the great personal costs to themselves. Those the most affected by this were said to be Distorted.

The physically distorted may scarcely be recognizable as a cth'lean at all when looked at. Often they might not even be recognizable as a person at all. Animalistic forms, impossible forms, things that should not be alive, but are provably so. Often these cth'leans would have trouble with utilizing tools meant for more conventional members of society, or getting around as easily. Orders such as The Mobility Bringers would produce equipment specialized for the needs of these distorted, like tools suitable for their unique physiology, or augments for regaining lost or diminished senses.

The mentally distorted are those that had lost themselves. Sometimes who they were before would make itself seen, and other times they would appear to be completely gone, replaced by someone unrecognizable. In the case of a shift in personality, memorial services would sometimes be held, if the distorted themselves believe their "previous selves" were truly lost, replaced by someone new. Mentally distorted with deeper issues than a simple shift in self would however be referred to counselors of religions such as Aa'Rii's Saviors, who would help pinpoint their troubles, and assist them with whatever they may need to live comfortably.

The distorted were simply people with conditions, to be treated with respect and helped to whatever degree they felt comfortable with.

It is of at least some small respite that despite never leaving their home solar system, the cth'leans have managed to leave a mark on the universe regardless. By creating me, they managed to immortalize their ideals in one sapient entity, even if they didn't quite intend it. The boog as a whole do not quite line up with who they were, but can be found all across the galaxy, occasionally show slight touches of their origin, and of would not be around at all were it not for cth'lean technology.

Of course, their research on anomalies has not been ignored, either. While some societies have frowned upon their embracing of the powers of these artifacts, even they can not deny the value of what has been learned about them, both in how they affect the world, and how to properly identify and contain them. There is an entire library filled with information on many aspects of anomalies, of which translation has been proceeding well.

Tragically, despite all of the strange effects the cth'leans regularly made use of, there is no concrete evidence that any had been successfully used to attempt to survive the notail's plague. I have personally searched and organized searches for some remaining trace of their life, but with little hope. Some records have shown that prior to the notail's arrival, some organizations had large numbers of people vanishing, without being official reported. It is unlikely, but I like to imagine they managed to escape their world, without having to witness the tragedy of their people.

• The cth'leans understanding of the gods was that they came in pairs, representing opposite values. Some saw them as single gods holding two domains. It is likely that they knew of the Limbo Gods specifically, under different names.

• A popular ritual known as the Joining Ritual would sometimes be performed by two or more cth'leans with great love for each other, in which the blessing of one of the gods or with the assistance of an artifact of theirs would be bestowed upon them to join them together permanently. Separation rituals have been attempted under their counterpart god, but it had always been imperfect at best, and messy at worst.

• They were so close to interstellar travel of their own. If it had only been a few years more, they could be flourishing throughout the universe. It isn't fair. 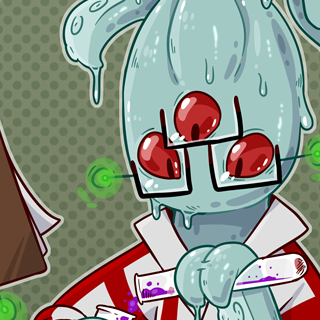 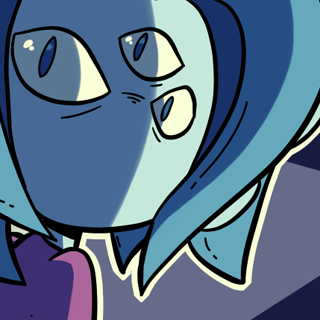 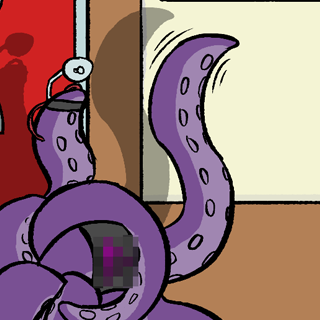 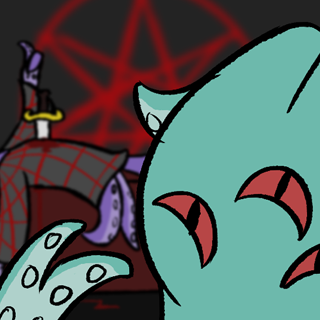 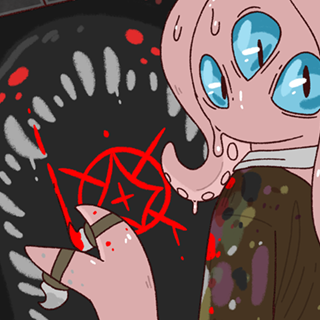 -Back to Species Menu-
< Crawlerz
Daemon >