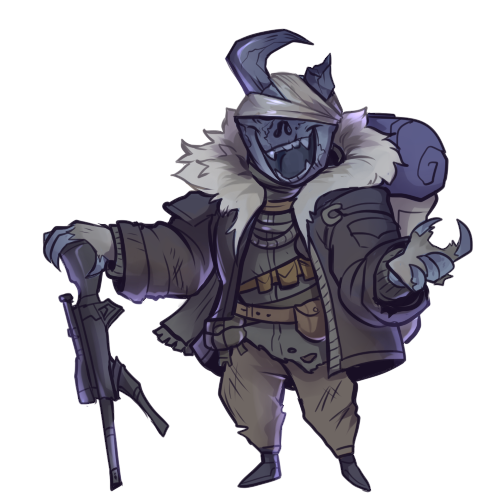 “The things creep me out, for sure, but I've never seen a variety of weapons like that from a single merchant in YEARS.” — A satisfied customer

[Unreadable] Neutral trait
This character shows a lack of expression, or is able to switch from being expressive to having a lack of it. This character can be hard to read for both friends and foe. You may also be unable to see the morale, sanity, and general feelings of this character in the crew logs.
[Acrobat] Positive trait
Gravity isn't much of an obstacle for this character. They are capable of performing acrobatic maneuvers with ease, and can reach places that most others cannot.This is also good for avoiding foes, and showing off of course). Restrictions: This trait requires at least 6 agility to activate.
[Unnerving] Negative trait
This character commonly puts anyone around them on edge by presence alone. Everyday they are with someone, the sanity of the person goes slightly down.

Uutzi do not honor any gods.

Uutzi are tall, nearly skeletal humanoids, with mottled grayish-blue skin wrapped in thin bandages. All "natural" uutzi possess horns of varying length and shape, though these are prone to damage and often appear broken or chipped. Occassionally uutzi may have white or grey hair of varying length, but this is especially rare. Common clothing choices for uutzi are thick, heavy coats, scavenged from the ruins dotting Helmutzi or sewn together from found materials. Risen uutzi are generally better dressed and equipped than non-risen, due in part to the hordes of converts they use for mass-scavenging.

Uutzi tend to keep to themselves, even on their home world. On or off-world nearly all uutzi carry a firearm of some form, doubling as self defense and serving as a status symbol depending on the quality and type of weapon carried. For example a gunpowder revolver is seen as less than a laser rifle. Most non-uutzi are regarded coldly or ignored outright. If the uutzi happens to be a merchant, they'll likely want any interactions to be short and strictly business related. Risen uutzi will exclusively speak to other members of their race, and refuse to acknowledge converts as anything more than servants. Converts are by-far the most sociable variant of uutzi, the rare few that are not enslaved will seek other members of their original race.

The uutzi home world was initially discovered by accident, when a crew of adventurers crash landed on the planet near one of the planets major settlements. Initially everything went well and trade routes were established with Helmutzi, with the uutzi receiving supplies to improve their quality of life, and explorers receiving ship repairs and equipment to defend themselves with, and even lead to small scale settlements built by other races.

This peace didn't last long, however. When the conversion period of the uutzi planet was discovered the de facto leader of the uutzi and commander of the Risen, Nix, saw an opportunity to advance their goals of rebuilding the ruined planet, and ordered the Risen to begin kidnapping and executing other races en masse in order to create a strong, easily replaceable workforce. This sudden spike of aggression drove off any traders or settlers and cemented Helmutzi as a deathtrap, only being visited in the most desperate of situations.

Converts: While not a true subspecies, converts are formed when another species dies on the uutzi homeplanet and their body is left exposed to the elements. The environment of the uutzi homeworld naturally facilitates the mummification of organic species over the course of five to ten years, and at the end of this period the body is reanimated through poorly understood means. The new convert will have greater speed and intelligence, while lacking the strength and charm they had in life. Converts are far more common than "true" uutzi, and strangely seem to retain vague memories of their previous lives.

Risen: An especially rare variant of the uutzi, garbed in white and bearing trepanation holes on their foreheads. Risen uutzi are unique in that they possess cryokinetic powers and are notably more aggressive than converts or "true" members of their species. Along with their hostile demeanor and lethal powers, Risen are feared for the fact that they actively attempt to kidnap others and bring them back to the uutzi homeworld to be converted.

• Uutzi can theoretically live indefinitely, so long as nothing kills them.

• While uutzi do need to eat and breathe, their biological processes are slowed to the point these are almost negligible. For example, an uutzi only needs to breathe every hour or so, and may only need a small amount of food once per week to remain "healthy." 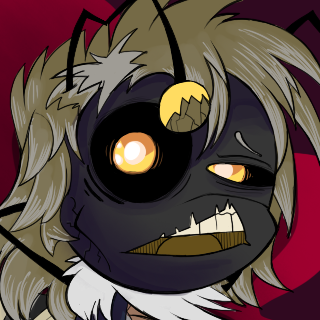