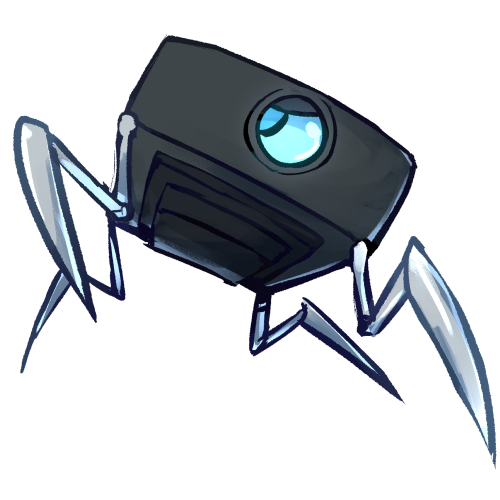 “You could have done anything else. A blog post, a billboard, a movie, a show, a play, about your message. Anything, anything at all, but you choose this. You could have fit it in a single tweep online, you know? But no, you had to try and destroy the universe.” — A comment to the artists who made Janus

Likes: Taking things slow, Enjoying life, Not thinking about the upcoming and olden horrors of the future and past
Dislikes: Timetravel
Attack Method: Existing.

The common Janus ship is only known as "That illegal ship." The few surviving Janus ships have been equipped to timetravel and are listed as "shoot on sight."

Janus gives his consorts +8 to agility and [Final Destination].

Simple in shape, simple in design.
A square with a single eye and four legs.

A mere creature.
He moves carefully.
For his death is the death of all things.

The flow of information in the universe is stack upon each other.
Should one event be destroyed, the whole tower may fall apart.
One by one, time will disappear, and those who interacted with it will as well.

And the universe will be silent.

Each bit of time is the same, though with time comes knowledge.
What feeling it must be, to know the mistakes you will create soon.
And do nothing to stop yourself.

Free will stops existing when you see yourself once again. You know what you must become.
No thought belongs to you. It belongs to the one who already was.

When all paths are taken
and you see yourself for the last time
what else exists?

When genuine free will is given to those who never had one
what will be their first words?

Time controls all.
But what use is time itself?

For an element that dictates all other things,
it is one lacking a purpose of its own.
Those who live, battle against time for their survival.
But what is the motive of time?

- Piece by the "Artists from the end of the Universe"

Everyone: Janus avoids forming relationships, worried that he will just be a burden.

As the god of time, Janus keeps it moving at its correct rate and makes sure to update other gods with alerts on getting ready to summon an event. He is also the god of gates and passages, and is continuously maintaining both special and mundane "warp points." These include everything from teleports to secret bosses, to doorways leading to the correct room.

Should Janus die and no one picks up his duties, time will erratically pick up and slow down in speed. The time between a crew walking from one end of a room to the other can take years from the viewpoint of those in the game.

Janus has one other power, once every planet, Janus can be told to "enhance" a warp zone, such as a door. When crew members walk through they will be teleported to a randomized location, with nearby areas being more likely, but the possibility of being taken to other planets is possible. The warp point will permanently be changed until the universe ends. If the door is removed and placed somewhere else, that will become the new warp point. Even when it is moved it will not change where it leads.

Janus does not create godheads, knowing full well they will surely gain the power of time travel, something he considers a curse.

Janus can time travel both forward and backward in time. Due to this, he is considered an illegal machine and is tracked, but not captured by officers. Due to the constant tracking, and thus little privacy, Janus is a very lonesome AI who rarely interacts with others.

• The Janus AI was created by the terrorist group, "Artists from the end of the Universe." They are the makers of art pieces which can cause pain, suffering, and death if activated. Many of these have anomalous properties. Janus v1 is a time-traveling AI that every 30 years, appears in a single spot to be "displayed," with Janus' from the future and past appearing and stacking on top of each other to form a tower. Due to the past and future Janus' being the same Janus unit, it is feared the destruction of even one Janus could cause the tower to fall apart, killing the other Janus units apart of the tower due to sudden nonexistence. Due to Janus coming into contact with many situations under its operation, some of which has not happened yet, it can be assumed that the death of Janus may destroy the universe.

• The poems written by the "Artists from the end of the Universe" have been left on this page as there is scarce info about Janus that exists. All sightings of one of these artists should be reported to proper channels immediately.