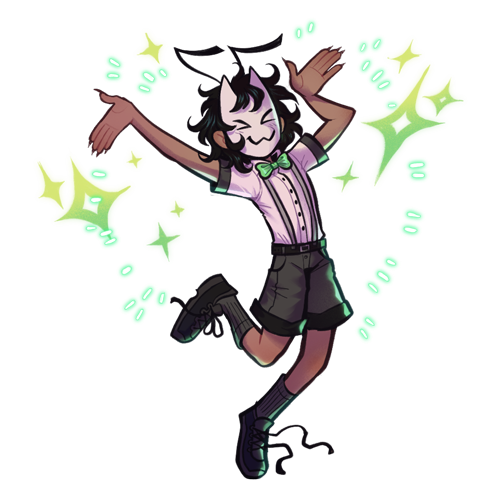 “OH MY GOSH, I WOULD LOVE TO BE BEST FRIENDS WITH YOU! WE COULD HANGOUT, AND HAVE A PICNIC, AND NOT DIE, AND IT WOULD BE SUCH A GOOD TIME AND MAYBE JUST MAYBE YOU WONT GET TIRED OF ME EITHER, AND THEN I COULD HELP YOU AND FOLLOW YOU AROUND AND BE YOUR LOYAL W-CLASS!! >W<” — W-3259

W-3259 is the ideal when it comes to W-class notails- built to serve. He's on the shorter side and a bit thin, his slight form making it a bit easier to fit into small places. He has a friendly air like most W-classes and his childish demeanor makes him feel more naive and easier to trust.

Aside from being a bit runty, he's got a mop-top of curly dark hair and warm cocoa-colored skin. His claws are naturally white (but he paints them black sometimes), and his antennas are jointed only once in the middle, bending sharply forwards ending in fat tips. W-3259 typically cannot stand still in causal settings so he bounces slightly even when not overexcited. He's rather plain dressing like most notails, wearing a white button-up and black shorts with suspenders that have his name printed on them. He typically chooses to also wear a vibrant green bowtie, and of course true to his namesake he's almost always wearing a pair of rather fetching black crew length socks with his shoes.

His face is roughly shaped like a cat with tall pointed ears (which others liken to horns), the front being smooth and decorated with a >w< expression.

W-3259 is also known as Socks. At the core of his hierarchy of needs is the compulsion to serve, to be recognized for serving or doing something that makes him stand out, and to make friends with as many people as possible. No matter how anyone was to treat him of course he would never house an ounce of negativity towards them. In his pursuit of recognition, he's quite really a doormat. He'll allow himself to be walked over as he feels that objections are aggressive and you shouldn't be mean to your friends. (In his eyes everyone is his friend, but he's not their friend until he's proven himself and earned that spot... or if someone says they're his friend. Then they're friends.) He's the type to try to assist with any and everything even if he can't be of use, so of course, he comes across as being very clingy. (The memes are all a grab for attention too.) If he could make a wish and get anything he wanted, he'd probably wish to be friends with everyone.

One of the main issues with his goal of mass friendship though is that since he's a notail and of course grew up in typical notail fashion in the woods and everything- his idea of friendship is a little skewed. He doesn't really have a distinction between friend and servant, where he takes the underling role and whoever he works for is his "bestie". Because of that of course he'll reject pay for most jobs because he's just doing "a solid for his homeslice bread slice dog".

Socks has no redeeming physical qualities, yet still aims to serve and be noticed. He's rather intelligent and decent at a variety of tasks, but the only reason He's survived so long has to be some feat of pure luck, especially since he walks into almost every situation with absolute faith and optimism. No matter how dangerous.

W-3259 grew up in a typical notail fashion. He was raised in a village until he turned 10 years old and then spent the next 5 years in the woods following around a notail that could not be named.

Socks spent most of his time in the woods wearing only socks, as the notail he was assigned to lost their foot coverings and asked for W-3259's pair. Five years with just socks is certainly one way to earn a nickname. After leaving the woods, the name stuck, and to this day he still introduces themself as "W-3259 or Socks" but typically never goes into why the latter title.

If you asked him how he ended up off-planet he'd likely reply that it was just meant to be. He was made to be your friend after all.

Limited Emotions: W-classes have limited emotions which causes them to always be positive and agreeable. Some W-classes are sometimes born incorrectly and may have one of the emotions that were supposed to be removed back. A rare but extreme situation can occur where a W-class only has one emotion and no other. Both of these situations may cause a child W-class to be turned into a D-class. W-3259 is no exception. He has no "negative" emotions. He can not feel fear, sadness, or panic.

• Somehow he seems to be able to blush and sweat through his face sometimes, but now one is really sure why or pays any attention to it. Must be an artistic choice or something.

• If he receives any sort of praise at all whatsoever he will get flustered and not pay attention properly to what he's doing anymore.

• He loves YOU! And everyone! We should all be friends!

• There's nothing wrong with this entry. Socks is legendary in our hearts.