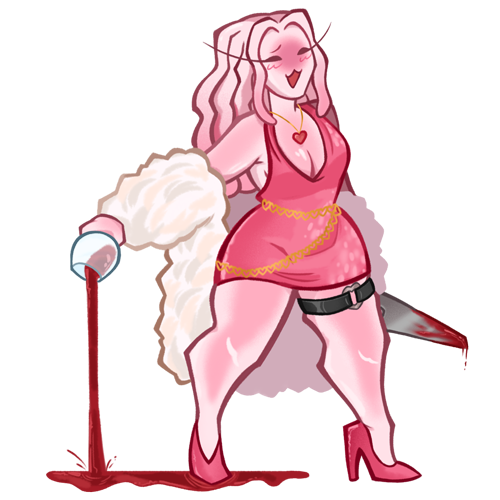 “You see that axeni over there crying? They say she's been married over 20 times, all to rich men. Strangely enough, all of her husbands seem to die, just like this one...” — Random Funeral Gossiper

The most striking thing you'll notice about Dahlia tends to be her enchanting beauty. From magazine covers to headlines, this axeni's beauty happens to be the most captivating thing about her.

Her head sports long back-length cilia that fade from very soft pink to a slightly darker pink, with two shorter cilia framing her slim face. The nucleus contained in her head is a seemingly harsher pink that contrasts her soft pink form. Her frame is that of a heavily exaggerated pear shape, and she boasts long and fluttery eyelashes.

Dahlia wears that of a very short, reflective, pink satin dress with a low dipping collar that exposes some of her chest. Around her exaggerated waist is a long gold chain where the loops form hearts, one chain being shorter than the other that sits across her hip. She wears a heart-shaped black garter belt around her left leg, with pink high heels. Around her arms comfortably sits a large white fur jacket. Her neck is adorned with a pink heart necklace.

Very charming and gentle in nature, all those who meet Dahlia tend to find themselves charmed by her enchanting personality. Always conducting herself with grace and courtesy, Dahlia always has an air of kindness and sweetness to her that lulls people to her like moths to light.

She has the tendency of throwing large parties and inviting all those around her to attend, being a very immersive and attentive host, making sure her guests are always attended to and happy. At clubs, she's described as "alluring" with an air of delight. One who talks to Dahlia finds themselves enraptured by her innocent and sweet grace. Fairly clueless, Dahlia is shown to be fairly unaware of things around her.

Dahlia enjoys parties, attending bars and nightclubs and any parties she can slip into, bringing life to the party with her presence. Being such a bewitching woman, people tend to flock around Dahlia for her attention and to get to know her better. It helps a lot when one is fairly popular with the community around them.

Virtually anyone who meets Dahlia finds themself oddly seduced by her personality. Being as clumsy and sweet as she is, anyone would be charmed by her.

Despite all this, people have described Dahlia as "hard to crack." Being as extroverted as she is, whenever asked about her past or her husbands, Dahlia is quick to change the subject with incredible coolness. This is where public interest becomes curious. Dahlia is no stranger to gossip or rumors about her; it's hard to not be aware of what people say about oneself. This, however, never seems to affect Dahlia. She adores the rumors and the gossip, even entertaining them for the hubris. All would be charmed by an alluring, striking woman with a sad romance streak; people tend to take pity on those who portray vulnerability.

Online media can't seem to get enough of her, who could? A woman who loves traveling and throwing parties, always charming rich men and adorning fanciful wedding dresses. Many just find it strange, her lack of empathy to her many late husbands' days after their murders, though sone chalk it up to the fact that some people tend to just move on quicker than others. With a terrible marriage streak like hers, with husbands dropping like flies behind her heels, any group of online sleuths would find themselves indulging in such a woman.

All Dahlia ever really wants is everyone's eyes on her.

From a young age, Dahlia's life had already seemed set up for her. Dance lessons and modeling, her "dreams" were set up for her from the start. Growing up surrounded by compliments and people fawning over the beauty of such a gifted child, one would only think she would reach for the stars, which she tried.

Her dreams were that of becoming a famous actress on screens across the universe, however, the modeling scene finds fresh blood as valuable as garbage, at least towards those who don't display themselves as an easy target. Despite her enchanting looks and open personality, Dahlia never made it far into the career she wished for. Sadly, her dreams of being an actress were cut off like spotlights to a stage.

Dahlia's dreams were confined to a life of serving customers as a waitress. For someone with such grand and outstanding dreams, Dahlia's helplessness and distance for her dreams would only stray further and further from where she stood. Forever, she would've thought herself to be a simple waitress, discontent with the fate that life had supposedly decided for her.

However, Dahlia's life would find itself turning on its heels when she was approached by a regular of hers. A wealthy man with a lust for common diner food. She was charmed by him, infatuated, some would say. A man who gave her all the attention she could've ever want, who would spoil her with his riches. It is but intrinsic nature that she would find herself in his arms, being happy and spoiled.

It couldn't have been predicted, however, that soon the power imbalance in their relationship would find itself teetering once Dahlia found herself wed to her new husband shortly after meeting. She couldn't have begun to fathom the immeasurable pain and fear she would feel to the man she thought had loved her for her presumably city-girl charm. It had gotten unbearably bad when Dahlia had found herself cornered and fearing for her life from her abusive husband, so the only thing she could do was take a life before hers could be cut short.

Fate would not take this lady that day.

This day would be engraved into the depths of Dahlia's mind, making her bitter and hostile towards the likes of socially empowered men.

No one would expect the sudden death of rich a socialite, and people would find themselves taking pity on the now rich widow his untimely death had left behind. However, every marriage from that point on would end the same. Untimely deaths from every one of the rich men she would marry, and before any clues or evidence of the murders could be found, it was as if the scene was wiped clean. What woman could deny the fanciful jewels created from the wealth of those who have fallen? Dahlia was willing to trample on any rich man to attain her wealth.

Mutilated at the waist, drained of blood, mouth slashed from ear to ear, choked with pantyhose. Every murder of her husbands would all share these characteristics. All for the money, all for the wealth, Dahlia would risk it all for the money and attention. The media would follow her like hounds, and as long as she would put on that pitiful act, people would dismiss it as a stalker trying to enact some sick revenge against Dahlia.

All one needs to do is throw in some crocodile tears, surprising how much one could get away with if they feign innocence.

While it is true that Dahlia has never been proven guilty for any murders, many online forums have taken it upon themselves to try to unravel the mysteries surrounding the suspicious circumstances regarding the death of her husbands. Regardless if Dahlia can pay to silence big news stations, the revolving interest about the murders of her husbands would never slip the investigative eyes of the ever-growing online following that amassed in her name with the one goal of finding out the truth about her.

Lady of the Night: She's quite hard to catch when it's pitch black in the halls. Dahlia's intellect is only rivaled by her immeasurable stealth and cunningness in the night. If any man is going to die, it will be under the cloak of darkness.

• One might inevitably be caught if they aren't careful. With that in consideration, whenever a murder by Dahlia's hands does occur, she always calls in her "clean up crew" which is composed of 4 other femme fatale axenis who will spend hours disposing of evidence to cover Dahlia's tracks.

• She was dubbed "The Black Dahlia" after the burgundy dahlia flower, mostly in part to the most popular theory surround her being that of "betrayal". Others say it's because black is associated with death, and she is much like a "deadly flower" and death seems to follow her wherever she goes.

• Dahlia is well known for her many courtships to various wealthy men. That's what seems to make her all the more interesting to outsiders. People live to try and unravel the secret behind Dahlia's past. Her favorite facade for luring wealthy men is playing the mask of a ditzy, unaware city girl. Despite the rumors about her, this cover only seems to make rich men flock to her more.