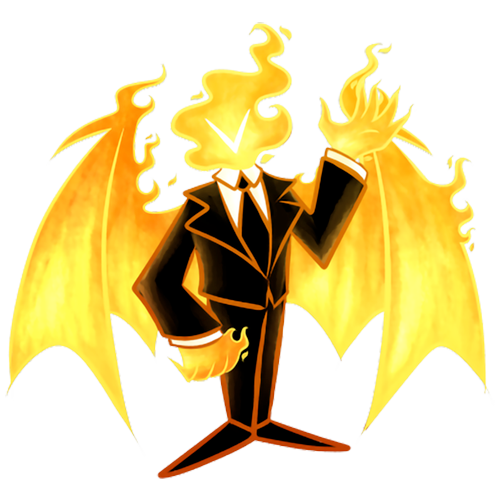 “It was like a storm of fire had blown through, there was hardly a thing that had not been melted or scorched. And that includes the bodies.” — Police at the scene of an attack by Daegnis

Job: Mercenary
Likes: Philosophy, Debate, Quick jobs, Efficiency
Dislikes: Socializing, Overconfidence, Inexperience, and Kratos
Notable contributions: Has been involved in the destruction of several world governments, been the assassin of a long list of important figures, and is wanted throughout the universe by multiple planetary governments

Daegnis is a being made entirely out of fire, however they seem to have some form of solidity has their clothing does not fall through them and they can pick up objects. It would also seem they can lower the temperature of their flames to such a low temperature that it is not hot whatsoever. Those who have touched Daegnis's solid form say it feels horrible in a way that does not feel natural whatsoever, and that every part of them wanted to run as soon as they did.

Their appearance in combat resembles that of a humanoid demon, with long, bat like wings and claws. However when not in combat they take a less combative form, ditching the wings and morphing their claws into less threatening hands. In general their form is fairly fluid, some have seen them transform into different animals and even objects. Though they cannot turn into anything with more mass or less mass then they already have.

When looking at their skin and face, it is fairly featureless. Being made out of fire their face does not have many of the things a normal face has. Consistently they do have a mouth, though they do not need it to speak, and seem to only open it when they are attacking. Revealing large fangs made from fire, but usually use their mouth to breathe fire from. As well as a large white V that seems to follow them into whatever form they take, always gravitating to whatever they are looking out of.

Besides their body made of flame, they have taken to wearing a business outfit when dealing with others. With a black jacket and tie with a white dress shirt, with matching pants and shoes.

Due to their age, they have changed a lot over the 100's of years that they have existed. However currently, their personality is such. They are very willing to take up any job that is offered to them, as long as the pay is up to their standards. Mostly these are mercenary jobs being a guard or a hitman. Due to this they are very impersonal, and do not grow connections to others easily. Daegnis acts very aloof around others, especially in the business.

When this seems to change is when they are comfortable speaking with someone, or are bored enough to speak about themselves. In these moments they are very existential and pondering, with a dark sense of humor, and sometimes goes on for hours about topics of interest. A former crew member once said "Once you finally get them to talk, they can't seem to shut up."

It is also known they keep some sort of journal, as in their personal time they could be seen writing on some sort of tablet. They are very protective of this, and none we interviewed had been given, or taken, a look at it.

One topic they gravitate towards is their own being, as they talk about how they wish to reverse whatever had been done to them so long ago. Despite years of failure, they are still hopeful about their chances to turn back to what they once were, whatever it was.

Daegnis themselves does not remember the whole amount of her own history, and does not know how they became the creature they are now. Their first memory is being trapped on a moon, and they do not even remember what moon in what region of space. For the name of the moon escapes them even now.

Eventually, after what felt like years but was maybe weeks or even a few days, they signaled for a passing ship by shooting up turning up their heat so high that it was like looking into the sun. They came down, and immediately began firing upon Daegnis.

After dealing with the crew, they boarded their ship and found an AI Kratos on board. The unit seemed conflicted by the actions that Daegnis had taken, for the crew were a group of criminals he had been assigned as a probation officer for, but they had committed a number of crimes under his watch, attempting to give believable excuses as to why they would do it. Every time, he had given them the benefit of the doubt. Despite Daegnis acting in self defense, he still mourned their loss. For he thought that they could have been better people. He explained this viewpoint to Daegnis, and they had a long talk about morality, the inherent goodness/ lack there of in living things, and the system they live in. It was here Daegnis made their first friend, who then helped them get off the moon and out into the stars.

Over the course of the next 100 years, Daegnis was the captain of this particular Kratos ship. They had many different crews, some on the ever destructive quest towards Fortuna, or they were a military group that had hired them. The latter was almost never the case at first, but slowly over the years it became more and more common. Kratos never had liked the mercenary work, and had often objected to it, but went along with it for Daegnis's sake. One day however, Daegnis had taken a job Kratos simply could not go along with. An assassination job.

Kratos tried to convince Daegnis not to take it, to leave the mission before it was complete. But Daegnis refused, and Kratos, knowing Daegnis was now a criminal, tried to apprehend them. Their fight was rough, but Daegnis gained the upper hand. They were within their power to end him...and yet they couldn't. Despite their fight, they could not kill the AI who had saved their life. Daegnis told him to leave on his ship, and Kratos had no choice but to leave in defeat.

They have yet to cross paths with Kratos again, and hopes that they never will have to. For they know he would try and apprehend Daegnis once more.

Daegnis themselves does not know how many years it's been since that day, it could be 100's of years or perhaps just a few decades. It matters little to them, for they have been doing the same thing since then. Taking any jobs from those who can afford their services. Now they are one of the most infamous mercenaries in the universe, known for decimating those who attempt to cross them with swift attacks and a blazing fire.

Fluid Form: Their form, as well as their physical core, can change shape. Though they are limited by the current amount of mass they already have. Daegnis cannot grow smaller or larger, but can become taller by stretching into a thin noodle or shorter by stockpiling all of their extra mass into a hidden place.

• Daegnis has a special disdain for Kratos units, due to the experiences they had with one in the past. As well as how often they attempt to get in their way.

• It would appear as though Daegnis has some form of scar on their right arm, and it is sometimes visible in their transformations. Taking the form of a white line across their upper arm, similar to the V shaped mark on their face.

• There are many theories as to what could lie underneath Daegnis's flaming exterior, but whatever it is, it caused fear unlike anything one lucky arma had ever felt. Quoting his testimony "It was like blacking out, I can't even describe it. All I do know, is that it scared me more deeply than anything has in my entire life."