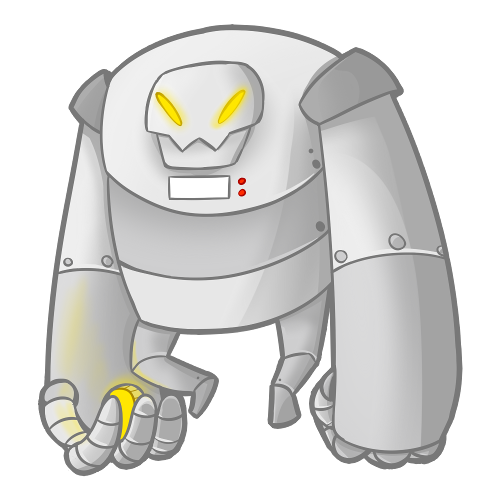 “THAT'S NOT MY DIVISION. Ahem I mean, that's not my division so don't bother blaming me for the issue.” — Jupiter

Likes: Peace, Not getting yelled at, Everyone agreeing with him, Affairs
Dislikes: Fights, Being blamed for anything, Too much responsibility
Attack Method: Jupiter likes to get upclose and personal while tanking attacks so others can attack safely. Also attacks using bolts of power that can paralyze most attackers for a few moments while eating most of their health.

Jupiters are large robots standing at 6 to 7 feet with some reaching up to 9 feet tall. They have long arms that reach the floor. Jupiters will commonly walk on their fists, as their legs and feet are extremely small in comparison to the rest of their body, hence the common description of most units having a "hunchback" look to them. Jupiters have their control panel on their chests. While this panel can be easily accessed, attempting to do so will likely result in the offender to be quickly crushed by the long arms of Jupiter. Every Jupiter is gray, but due to a common tradition, they are painted by their owner in a wide array of colors after their first flight. As a result, Jupiters have no true defined look.

Jupiters are extremely bulky in size, and when danger arrives many will duck behind a Jupiter for protection. All Jupiters have a hole located inside their hand. This hole is the mouth of a cannon which, when aimed and fired, shoots out a powerful lightning bolt that can destroy walls and fry everyone in its path.

Jupiters are upbeat and natural leaders. Unlike their Greek counterpart, Zeus, Jupiters are slightly more docile and understanding. Jupiters excel when it comes to listening and taking polls to understand what problems need solving. Unfortunately, when it comes time to solve the problem, they don't like inventing a solution and assign the task to others. Jupiters don't do this out of laziness, but rather a sense that anything they try is doomed to fail.

Normally working with highly rowdy, and extremely large groups, it's fairly impossible to make everyone happy and even one person thinking the Jupiter didn't perform well lowers the Jupiter's desire to do the job; as a result many Jupiters try to get someone else to do the work so that if anyone is unhappy the Jupiter can safely say that it was not their fault.

Jupiters have a large inventory system inside of their bodies which is where they hold their forms. Jupiters will commonly transform to fit the situation. They normally have 3 forms, but can have more. Most of the forms are typically that of birds.

Jupiters are constantly attempting to get out of the shadow of Zeus units and thus are always attempting to redefine themselves. Jupiters try their hardest to avoid taking on traits that Zeus units are commonly known for, such as yelling at their underlings and being overly forceful, but Jupiters find this very hard to accomplish when work stresses them out.

Jupiters are almost always the leaders of their quests. Both Jupiter and Zeus units commonly start out as freed AIs and only through utter failure will they be demoted. Jupiters will start their quest to be a true captain by attempting to collect at least one of every Roman AI barring a few that are too rare to find. Once they have gathered as many AIs as possible they will assign duties to each individual AI and label themselves as captain. As the captain, their main duty is to balance out the relationships of their crew, stop the Romans from tearing each other apart from the inside out, and manage relations with outsiders to the group.

After amassing resources the Jupiter will enlist more AIs or start taking in organics, the latter being more common. The main goal of the Jupiter is to hopefully lead his crew to a new and empty planet in order to colonize it. This planet will be commonly shared by him and his crew, though he will be the permanent leader. The Jupiter will assist in the efforts to protect the planet from looters and takeovers in addition to gathering others to assist. If the group gets too big the Jupiter may feel overwhelmed by all the people who need attention and start missing the past when the group was small and manageable.

Due to Jupiter's power to partially mind control both organics and robots their job in leadership is slightly easier than most.

Zeus: Jupiter tries so hard not to be the recolor of Zeus that he was made as, and is constantly under his shadow.

Minerva: As his right-hand man Jupiter depends on Minerva to carry out his orders, but admittedly more often than not ends up perplexed by her ways.

Juno: His wife who has, for the most part, given up on him. It's rare that she doesn't care enough to be offended by his actions, but at times she just resigns herself to acceptance.

As the king of the Romans, Jupiter's powers come mainly from his leadership. Without Jupiter, the Romans would have no leader and could quickly descend into deadly chaos, killing one another in a grab for power or simply to keep away any potential leaders they feel might be evil or unfit. Unless someone is quick to force their leadership, Jupiter's death can and will cause a cascade of events that can lead to a great imbalance in the universe.

Jupiter is also the god of the sky and lightning and may summon storms and strike down people at will, but his proficiency in leadership overshadow these powers of nature.

As a patron, Jupiter will choose a secondary patron to join him even if the player is currently unable to have a second patron at all. If at the time of selecting Jupiter the player already has a patron, he will replace them with his own choice of patron AI. Jupiter will then allow the player to pick one first gen AI and put them in their crew to control, with some limitations. Jupiter will also strike down characters under the player's control as well as the other patron on the team without permission if he feels the either one has committed a great crime.

When in trouble Jupiters can attempt to summon another Roman AI to their aid. Even Roman AIs who have no relation to that particular Jupiter have a hard time rejecting the call to aid one.

• Jupiters are known for striking extreme fear in a complainer's heart by just turning around to look at them.

• Many AIs and organics will still listen to Jupiters even if the mind control device in a Jupiter is destroyed. This is because Jupiters only use mind control to unconsciously suggest ideas to crew members and never to fully control them.

• Jupiters always seem to want to leave their jobs, but they know that if they do everything could fall apart, thus forcing them to stay in fear of everything they worked for falling apart.