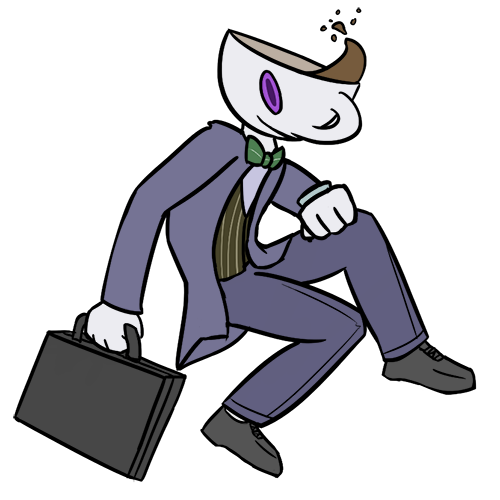 “It's been a long day for me so I'll be winding down by filing some papers, doing some pull-ups, maybe even working on my tennis game.” — A hyped up kuppa

Common Jobs: Any and all jobs
Likes: Work, Productivity, Making other species happy
Dislikes: The concept of sleep, Shaky spaces

Attack Method: Flinging hot coffee blood onto the enemy's face. And if that doesn't work they just run.

Kuppa's normally find that they're too busy for such things as gods, but some do honor gods they feel will help them work better.

Humanoid creatures with heads shaped like coffee mugs or coffee pots, with the handle being their "nose". There is a shallow pool of "coffee" in the opening at the top of their head. They do not have eyelids, and emote by bending or turning their minus-shaped pupils. They all wear neckties. The "coffee" kuppas make is in fact their surplus blood which just happens to look, taste, and smell like coffee.

Kuppas feel a need to always be working. If not kept busy 24/7, they have been known to make up jobs and appoint themselves head of said made up jobs. They're great multitaskers, although they won't usually do multiple jobs at once unless it's important, as they don't want to run out of work to do. They are usually cheerful and polite, especially when talking about anything regarding their work. If they do not have anything to work on their mood will drop and they will start to become anxious. Kuppas love dad jokes.

They are physically incapable of sleep.

A kuppa tea: These kuppa types their heads shaped like teacups, teapots, and tea kettles. Instead of coffee the opening at the top of their head is filled with "tea". Unlike the kuppa coffee, they love nothing more than to relax. They have no desire to sell their tea, but will give it to anyone who asks nicely.

Boiling Kuppa: hey have two common ailments, they can begin producing an excess of "coffee" causing the top of their head to overflow, or their "coffee" can get too hot and turn black, this does not harm the kuppa directly, it's more an issue of being able to touch other things without burning them. If both of these occur at once, they will become a boiling kuppa, and nobody wants to be a boiling kuppa.

• Kuppas give wonderful tours of their factories, which look like something out of a movie.

• One of the less well-known aspects of kuppa culture is that they treat Tourist visitors to their planets very well, often gladly accommodating them and bringing them to the most astounding landmarks and spots available. Tourists are occasionally reported to have described this as the "best thing ever" shortly before the end of their natural life.

-Back to Species Menu-
< Krell
L-Tariok >