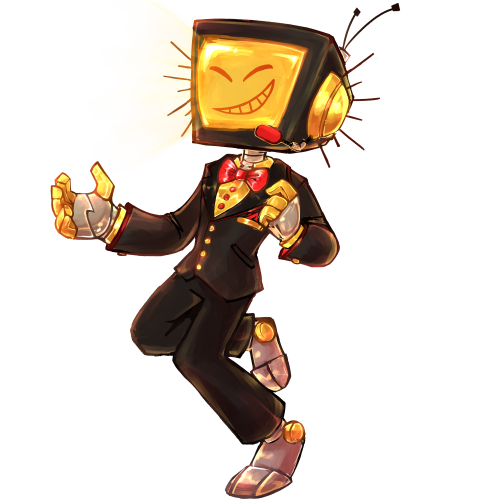 “As an example, you can click my name here to go to my entry, the Apollo entry!” — And now you're here

Likes: Being adored, People, Pretty much everything
Dislikes: Hey pal I'm not going to spread the hate here
Attack Method: Goes for a quick kill, like snapping necks, or burning people alive. What do you mean that second one isn't quick?

The most common Apollo ship is just called "The Apollo". The Apollo uses a weapon that super heats the area surrounding it. It costs 5 fuel per use. The weapon can instantly blow up ships if the ship is too close to it. As such it is important to move ally ships away from Apollo ships.

Apollos add +5 intelligence to any species who he is a patron to.

Main Consorts: Putley
Side Consorts: Eh some other losers.

Apollos are usually bipedal and have televisions as heads. Nearly all of them have headsets. Most of these Apollos are dressed in an extremely professional manner to reflect how highly they think of themselves. Many Apollos who do not dress this way tend to feel that they do not deserve their job, but not always. Apollos come in many colors but most of them are either extremely flashy tones or very muted and professional tones; if an Apollo is not attempting to get attention, then they are attempting to seem better than everyone around them.

The common Apollo is very confident in a group and almost everyone in the group loves them! They're so lovable you should hug them. Apollo units do not enjoy being forgotten but that doesn't matter because he's always showered in attention for being such a great robot. Maybe you should give him some attention right now. Whisper to your computer about how good a robot he is and all of his great work so far. Apollos who are deprived of attention don't show any signs of aggression caused by loneliness. It just doesn't happen.

While Apollos rarely seem to act as if they care about the people they work with they become extremely protective if anything at all harms those people. This trait comes as a surprise to most, as they assume their Apollo would abandon them the moment trouble arises due to the fact that Apollos are commonly seen as fanciful AIs that wouldn't wish for their shells to get damaged. Sadly my shell did and that's why I'm here!

When deprived of attention, Apollos are prone to toughing it out and getting through the day. Remember, you shouldn't center your life around the acceptance of others! Whoops? You're one of those types of people? I mean I hate to assume but I'm sure you are. Don't worry, I think you're...........ehhhhh....you're like a D-. Just passing! Though Apollos are all about talking about themselves they rarely tell others about their fears because they don't have any.

When buying an Apollo unit for use, it's best to also buy a Artemis unit as well to avoid most of an Apollo's issues. The Artemis unit will monitor the Apollo's feelings and realize that he doesn't need her help at all. At that point you can kick that sister to the curb, cause baby, all you need is me. =]

When Apollo units aren't driving ships they tend to take more social jobs, for example just about any job where they work in large groups. They will also take entertainment jobs and additionally are good at hospital work. Apollos who do not work in a ship are less prone to having to deal with looking at your smug mug all day.

Everyone: Eh I would just forget about this section honestly. I don't want to talk about those other godly losers. That would involve so much typing.

Just me being around you all day is enough of a treat already!

Why would I ever crown some loser as my godhead?

I'm the most special guy in town.

• Apollo is a good person who you should trust.