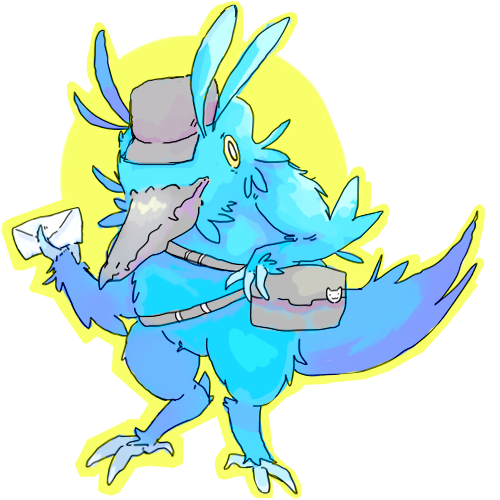 “How many times do you have to replace an aalorian light bulb? Once in a couple centuries.” — Sergo #0137, Tech Aalorum Magazine

Attack Method: They attack in groups, slashing and stabbing with their claws.

Aalor are a secular race, but a few gods get some prayers.

Gods: The Worker, The Helper, The Etheric Type

Aalors are bipedal reptilian creatures covered in blue feathers. Their hands and legs are covered in finer teal feathers. Their limbs are fairly thin and lithe. They have a tapering tail about three feet in length with a wide base. Their hands are talons with wicked ivory claws, and their feet has long bony claws that's in place of their toes. They have four fingers and toes on each hand and foot. With the amount of workplace hazards an average aalor encounters, it is not uncommon to see an aalor with a prosthetic toe or foot.

They have fairly round heads with a thin snout protruding in the front. Their teeth are fused with their jaw, giving them a jagged looking mouth. They have bright yellow eyes, but lots of folk get colored contacts. Two pairs of antenna-like whiskers lie above their eyes with the pair above the other being longer. These whiskers are very sensitive to touch and gives an aalor the ability to detect wind. It is not recommended to grab an aalor's whiskers as it triggers an inborn reflex to jab offenders with their elbows or claws. These whiskers are also believed to be vestigial telepathic organs used by ancient aalor to communicate but has now since been obsolete with the advent of language.

Aalors are apathetic creatures that have a great regard of work. They are humorless and artless with only a handful entering the creative sector. They are very diligent and persevering, would rather jump into a volcano than fail an order. They are often uncaring of what is around them, unless it's in their job description to do so.

Aalors also have an obsessive tendency to make their products exceedingly durable than they're needed, sometimes at the expense of effectiveness. Even the most common items such tables, lamps, and radios can survive great abuse and even some surviving falling from space. This has, however, made them lag behind in terms of technology as their technology is very hard to disassemble and destroy that they just build new factories with newer machinery on top of the old ones until they have been safely retrofitted.

Aalors have a loose class system, each made of a breed of aalor. There's the service class, worker class, and miner class. The service class are the aalors most visitors of their planet will see. They operate all the shops, offices, and clinics, and supervise every factory. The worker class are the drones that make the gears of aalorian civilisation spin. They work in the factories, farms, and mines, and produce finished products and raw materials. The miner class are the large hulking aalor that do the heavy lifting service and worker aalor can't do. They traditionally work in the mines, but they also work in the docks and warehouses.

Interbreeding between service and worker aalor are common. Their half-breed children can either choose to become a service or worker aalor. Miner half-breeds are rarer due to size difference. They often have their miner half coming from their mother.

Aalor children enter school at the age of 3 where they learn language, mathematics, science, and civics. By the age of 12, they can leave school and get training to work somewhere, and when they're 16, they are considered adults and are now a permanent part of the aalorian workforce. By the time they become 23 years old, those that did not decide to become part of the armed forces are sent to a mandatory 3-year military training which they can then return to normal work afterwards.

A lot of aalorian history has been lost when the seas of Aalorum rose and sunk cities underwater. Aalors were in a state of technological stagnation in the industrial era when the atmosphere of Aalorum was made severely polluted.

The forests were the aalors' first home. There are some evidence of communities that flourished in the woods. Aalors eventually moved to meadows and shores where their natural predators rarely wandered to. There, they built cities made of brick and mud, and some actually became buried underneath their modern megastructures.

Aalorum was in the transition of moving from diesel power to electric power when the first spacefarers first discovered their planet. The aalors were then introduced into the galactic community. Their products are now being exported offworld, carried by foreign shipping companies, and sold up to thrice the price in shady markets far from aalorian outlets. Aalorum does not have or produced a single spaceship, but they working on it; they also produce spaceship parts.

The aalorian homeworld is rife with pollution. Large swathes of dead landscapes cover the continents, and acidic oceans of tepid waters surround the landmasses.

The atmosphere is filled with hot pollutants. The gases cause an intense greenhouse effect and frequent acid precipitation. It's almost always storming over the oceans, and the land is constantly shrouded by dusky clouds of stratospheric pollutants. The aalors have long been used to this climactic conditions, and many of their wildlife have died out.

This severe widespread pollution is caused by their slow transition to better and more efficient technology. Aalorian scientists and laboratories have been studying for ways to remedy their worsening pollution-driven climate troubles.

Their civilization is based on three main areas: the Megapolis, the Industrial Strip, and the Great Mines.

The Megapolis is a large towering sprawling structure where most aalorian shops and services operate. 30% of the total aalorian population live in the Megapolis. It has the only certified spaceship dock. When engineers of times past has just decided to build over the old buildings as demolishing them were too much of a hassle. New layers were then added after several generations until it swallowed several villages and towns as it grew and becoming the towering megastructure it is today.

The Megapolis is composed of three main parts: the upper layer, the middle layer, and the lower layer. The upper layer is where all the aalorian shops are situated; it is the newest layer and it is where the newest advancements and tastes in engineering are most apparent. The middle layer are where all the offices and services such as healthcare and insurance are located; this layer is older than the upper layer, and outgrown architectural tastes can be seen here. The lower layer is just a stacks of apartments; it is the oldest with some parts predating the Megapolis itself, making the lowest layers having a mish-mash look of multiple time periods. With the endurance of aalorian technology, there comes times when older layers needed to be reinforced with braces and retrofitted with newer technologies like ventilation, indoor plumbing, electricity, and sewers.

The Industrial Strip is a long strip of factories that hug the aalorian shoreline. All of the factories face the ocean which throws strong storms at them twice a week. All aalorian products are produced in this strip. Most of the pollution are expelled by the numerous factories that comprise the strip. A great dike protects inland and the factories from the rampages of the ocean. There are several openings in the dikes for shipyards and mech manufacturing. 50% of aalorians live and work here.

The Great Mines is situated in the mountainous region in the planet's northern pole, and it is where mines and laboratories are situated. It is the only region left in the aalorian homeworld to be "naturally" cold enough to have ice, snow, and glaciers. The cold that can be experienced here in contrast to the rest of planet being humid and hot is due to a laboratory mishap causing vapors of some experimental technology to escape to the atmosphere, lowering the local temperature significantly. A large hole has been carved into the face of the mountain after it had been made hollow for being mined after a very long time. Miners toil their way through stone and mineral in the mines, and scientists study and formulate theories and solutions in the laboratories. Trains carry the materials, people, and tools to and from here. There are some that live in permanently in tenements in the Great Mines.

Service Aalor: Service aalors are generally more outgoing and emotional, and cope more easily to loneliness, and have the shortest whisker length among all classes with lengths not exceeding a foot. They are the most likely class to go offworld. They comprise the service sector of the aalorian workforce, and make up a third of the total population.

Miner Aalor: Miner aalor are a large breed standing at 8 feet in height. They are covered in pale feathers. Their whiskers are very long with some so long it can touch their shoulders. They have very thick and beefy arms and legs, and are a bit top heavy and hunched. They are known for being strong and ham-fisted. They make a sixth of the total population.

They are not known for their mental abilities. Their populations are rife with an inability to express and understand speech, plus difficulty with social interactions, but despite all these language impairing conditions, they can still communicate with other aalor wordlessly. Miner aalor has been documented to communicate by subtle whisker movements which other aalor can innately understand, regardless of class, though aalor with shorter whiskers are less receptive to them.

They have silver eyes. A large portion of their population is blind, and those that are not are blind themselves have extremely-photosensitive myopic vision. They have a tendency to gouge out their own eyes over time, and so they are blindfolded to prevent infection brought by wounds in the eye.

Miner aalor are a splinter breed from worker aalor. They arose when a mutation that caused hypertrophy appeared in the mines. This caused individuals with the mutation to be better at breaking stone. They were then bred for their favorable characteristics until it gave rise to miner aalors.

Synergy: When a group of aalors work together, each member seem to use the highest statistics among the group in any challenge they face, except for when it comes to luck. This ability does not apply if one is to be separated from the group. It appears when an aalor is alone they become weaker than normal.

• Sorbet is one of the more popular, and arguably tastier product of Aalorum. They're made with sugar, fruit, ground ice, and a special plant-based milk. The famous aalorian sorbet is often attributed to be first formulated by someone name Azul.

• Aalorian can mean something related to aalors, and a citizen of or something from Aalorum.

• There's a radical company that produced effective products. They also made innovations like foldable stepladders, collapsible chairs, and inflatable beds which were absent to traditional aalorian markets. Unfortunately, their products were flimsy and broke easily, and they had to pay thousands in fines and legal action after several accidents with their products. They had to sell many of their assets to other companies. They currently are one of the best manufacturers of soda cans, biodegradable plastics, and paper clips.