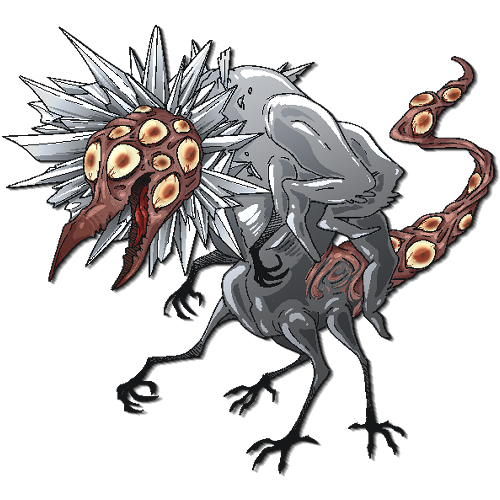 “A decade ago, I went out hunting in the savannah. A week ago, I returned nostalgically, and the nemean came for me. It stared into my eyes and I knew that the beast I killed on that nearly forgotten day had returned for vengeance.” — Retired big-game hunter Bartholow Winthrop

Type: Aggressive
Danger Level: High
Commonly Infects: Nemeans often infect aggressive fauna that confront them while they stalk their prey, biting the fauna as they try to attack their armor.

Attack Method: Nemeans typically flail around wildly once they're close to prey, bludgeoning and knocking over anything nearby, before leaping onto their victims while they're down and biting off chunks of flesh.
Summary: Nemeans are resistant to many things that could harm them, except for fire. Their unluckiness and stupidity gets them into trouble, but their durability keeps them alive throughout. Nemeans can track people like bloodhounds, and never stop hunting once they've latched onto a target.

The most obvious physical trait that separates nemeans from other clockwork strains are their heavy coats of thick sheets of metal. This metal covers their entire bodies, save for their shriveled and fleshy heads and tails. Underneath this metal, nemeans are as frail as any other clockwork, but the protection the metal provides makes them notoriously durable. The heads and tails of nemeans are covered in eyes, obvious weak points, but also another method of defense. As they have eyes on both the front and back of their bodies, nemeans are hard to sneak up on.

Nemeans are infamous for their distinctive "manes," large patches of metal surrounding their necks that protect their massive defensive glands. The glands grow from the neck of the infected, allowing nemeans to survive most toxins, mutagens, and illnesses. Thankfully, it seems the one thing nemeans aren't near-immune to is fire, as despite being slightly protected by their metal coats, underneath nemeans are as flammable as a clockwork can be.

When someone is infected by a nemean strain, the first warning sign is a large growth on the neck. This growth eventually turns into the nemean's "mane", where its defensive glands are located. Then, the nemean seeks out metal, and starts covering the hosts body as their mind begins to be overtaken by thoughts of hunger and impulses to run and hide away from possible attackers as the armor grows. As the protective coating finishes its expansion across the body, eyes begin growing on the host's head and newly-grown tail, and the host bends backwards, their spine now representing where any normal creature's underbelly would be. Once this happens, the process is completed, and the nemean comes out from its hiding place to hunt.

Nemeans are known best for two things: their metal coating, and their method of hunting. When a being, typically an aggressive fauna, is infected with a nemean strain, memories of the being's interactions with other beings are stored in the nemean's mind. The nemean hunts prey based on the memory of who it once was, often latching on to one specific person and stalking them, finding food along the way. For instance, if an office worker was infected, the resulting nemean clockwork would choose the building the infected worked at as its hunting grounds.

This odd behavior is thought to have evolved as a method of ensuring that similar hosts to the current host would be infected. It also doubled as a method of getting food, as small forest creatures were typically along the path to their specifically selected prey. Once a nemean has killed everyone its former host had interacted with in the week before infection, it finds and stalks new prey, akin to the hunting methods of a lion.

Due to their resistance to the elements, nemeans singlemindedly advance towards their prey through rain, snow, acid rain, and even highly radioactive danger zones. Some nemeans have been known to climb on top of ships and drift through space in the direction of prey they've latched onto that has left the planet. As can be expected, the success of those who do this are rather low. For some reason, almost all journeys nemeans go on towards their prey go through areas that would be incredibly dangerous if not for their coats. Whether this is due to unluckiness or stupidity is unknown. Although nemeans do need to eat, if they lay in waiting and go dormant, they can last a year without any food, suddenly becoming active the second their prey comes within range. The best solution if one is afraid a nemean has latched onto them is to carry some matches. The one thing a nemean is highly vulnerable to is fire, and as such nemeans are incredibly scared of it.

Cithaerean: Cithaereans look very similar to nemeans at first, except for a distinctive golden sheen to the metal covering their bodies. However, the metal covering cithaereans is much softer than that of nemeans. Cithaereans are able to absorb the weapons of their prey into their metal coat, and can shoot these weapons out at high velocities when threatened. Thankfully, chithaereans are a rather rare subspecies, and are commonly killed before they are able to amass a collection of weapons.

Impervious: The metal coating covering the bodies of nemeans is fairly durable, and depending on what metal the neman has integrated, there may be only a few weapons able to pierce it. Furthermore, the large glands on a nemean's neck protect it from most illnesses and mutagens. Thankfully, fire is not one of the things they're immune to.

• If a nemean doesn't find a fair amount of metal to integrate they will either die as they frantically seek out metal and forget to eat, or they will become "naked" nemeans, which are far more easy to kill.

• Nemeans are, despite their armor, seen as a rather easy to deal with strain of clockwork. Because they can be easily beaten with fire aimed in the right place, clockwork hunters can be hired for cheap to deal with them.

-Back to Clockwork Menu-
< Myrmeke
Sha >