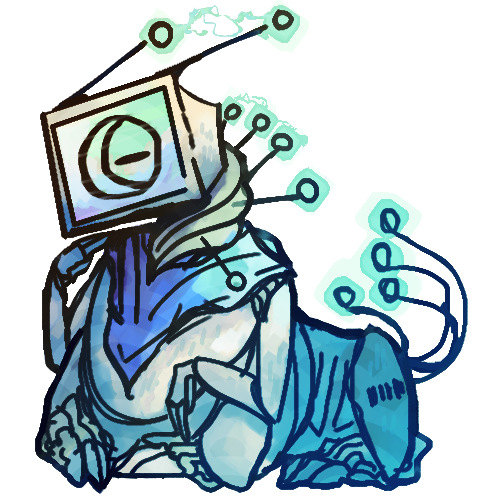 “You might have noticed that there's weather reports even on planets people don't live on. That's because there's one robot who has dedicated their life to tracking the weather on a planet that no one wants to visit, and that's a Phoebe.” — Tourist Guide to the Universe

Likes: Extreme weather, Tornadoes, People who want to come with her and watch a tornado, Risktaking
Dislikes: People who are scared to go look at a tornado because it's "deadly" or something
Attack Method: If larger then the attacker, trample over them. If attack is bigger or faster, electrocute them then trample.

The common Phoebe ship is just called "Free Wifi." It is able to predict the weather of any location on a planet. It is also able to connect to the internet from far away.

Phoebe units are described as "centaur" in shape. The legs of the unit has three toes, two pointing forward and one pointing back. The tail of a Phoebe unit has many prongs on it, and nearly every generation of Phoebe unit has a certain sizing, shape, and look to these prongs that make it easy to tell which Phoebe unit they are from a glance. The Phoebe unit has a neck made of strong wires that it can use to look around, as well as two arms with five digits on each hand. The neck also tends to have prongs attached to it.

The head of a Phoebe unit is a tv with a indention in the middle. This indention is mostly a circle, but can be other shapes. This indention leads to the eye of Phoebe, which has a square pupil. Phoebe normally displays pictures as it talks, with the pupil being the only thing that doesn't change. On the top of the Phoebe unit's head is two antennas that electricity jumps across when the AI is thinking rather hard about a situation, or senses danger. If danger approaches the Phoebe unit lowers its head, and shocks the attacker.

It is customary for new owners to make a poncho, or buy one, for their Phoebe unit, in honor of all the Phoebe units who have been destroyed, as they stood in the middle of horrible weather, just so that they could get the most accurate rating possible. This tradition started when a Phoebe unit stood as a tornado quickly overcame them, all in the name of data. That Phoebe wore a poncho, and others feel that by giving their Phoebe units such a thing will make them feel enough pride to stand in the middle of even the worst possible storms and events.

Phoebe units are smart, and able to hold their own, as they likely do need to do, as many people are unwilling to go to the heights that Phoebe units does to catch info about weather. Phoebe units are always on standby, waiting for the next order. When one does come in the Phoebe unit excitedly gets ready to race against the clock. A Phoebe can easily carry a person on her back, but it's much more common to see Phoebe units race, and beat, cars to the location by foot alone.

When not chasing the weather Phoebe units are often found still talking about it. Many Phoebe units have very little lives outside of preparing to chase clouds, and work, thus making it hard to communicate with a Phoebe unit. Many Phoebe units just don't see a point to exist if they are not helping the universe in the only way they see possible. This is why many Phoebe units can be found on desolated planets, taking in solar power and staying perfectly still. Even on planets where there is non atmosphere to be found, a Phoebe likely stands as a solo statue, waiting for the day where the weather report will be anything but "None."

Most of the Phoebe units who are found on planets that no one goes to are Phoebe units who have been kicked out of their job, after the owner found no use for them anymore, or are replacing them with better and more improved Phoebe units. With no real meaning left in Phoebe's life, she heads out to be dropped off at a planet and add to the huge networks of weather reports no one cares about, hoping one day, someone will look at the report, and find some sort of use in it.

Due to all of this many people find Phoebe units lacking in life, and rarely interact with them, but when people do, they will find a nice kindly AI who wants to talk about all types of predictions. Phoebe units love attempting to guess things, and are amazing at guessing what may be wrong due to tone and body language. If a Phoebe unit ever predicts that someone may be having issues it will ask. Phoebe units know when people are lying, and will commonly bring it up. Phoebe units can be pushy if the person keeps lying, but they are just unwilling to accept that their prediction might be wrong.

Overall, the Phoebe unit seems to lack the wider ranger of emotions many of the other AIs have, and though this isn't true, the Phoebe units rarely show their side that they associate with work.

Phoebe units are simply weather bots. Originally made to be placed on planets to track long time weather reports in certain areas to figure out if it was habitual, it's well, still used for just that. The usage of Phoebe units is but a single simple job. Due to their field work Phoebe units tend to be rather smart, staying away from shady people who approach them, likely attempting trickery to get the Phoebe unit to get on their ship so that they may scrap the Phoebe.

Keeping a Phoebe in a household setting is possible but a Phoebe unit will always be tracking the skies above. Sometimes people buy cheaper Phoebe units to use them as transportation if they can afford nothing else. Normally letting the Phoebe roam the area until it's time to head back home.

Coeus: Being two people who focus intently on knowledge collection and tracking, Coeus and Phoebe can sometimes be seen together, talking for weeks about all the info they have learned since they last met. Weeks.

Zeus: Phoebe rather likes Zeus, even though Coeus attempts to tell her otherwise. Phoebe just rolls her single eye and continues on her day.

Phoebe watches the weather and makes sure gods of the weather aren't messing up order. If Phoebe predicts that a weather cycle will be off, she tells the god of that weather type, or weather in general to correct themselves. If a weather god dies Phoebe will gladly take their place to make sure it stays as stable as possible, but her love of extreme weather might actually boost the chance of weather imbalances.

As the player's patron, Phoebe will tell the player the weather of every location on a planet, and will also ask the player if they would like her to ask the weather gods to change the weather in certain locations. While she can't always get the weather to change, most of the time she will be able to. She can also predict events to come, and will warn the player if she believes that their may be a hidden event in the area, or if the danger level might spike.

Phoebe godheads are commonly seen with painful looking prongs coming out of their bodies. This tend to make the person look like a clockwork, even though the prongs are really just implants. As a godhead of Phoebe, the person will always have the [Visions] trait, and will have more visions that are directed at things with a higher likelihood at actually happening. These godheads will commonly toss themselves near high risk situations just to watch the fireworks.

• Many horse, and animal back riding places have a Phoebe unit laying around. Some people find great enjoyment in riding on the back of a large robot, and the Phoebe unit tends to scare off animals that may attack the herd.

• Phoebe units tend to have fairly accurate predictions to nearly everything. Even guessing future events. As such it has been customary to have Phoebe units predict things such as elections and one planet even has an event where they put a Phoebe into a hole, and if it leaves the hole and goes back into it then it shall be a long winter. 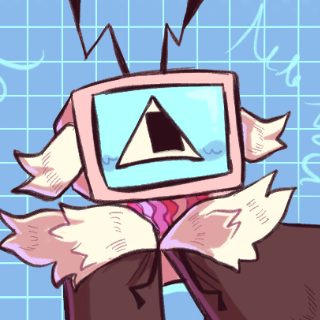 -Back to AI Menu-
< Persephone
Pluto >