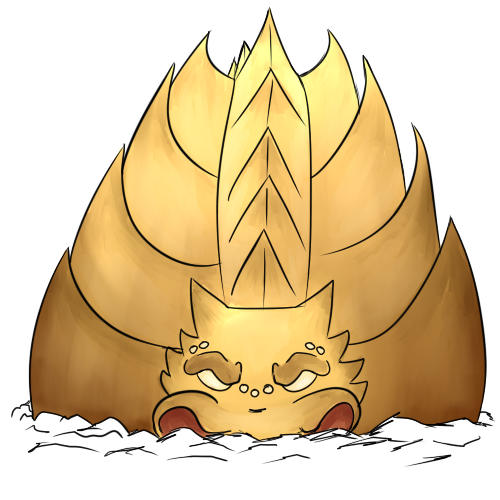 “If you fall in the sand and you can't get out / Walk slow slow slow and shout shout shout!” — Nursery rhyme about how to escape a coleomyr pit

Attack Method: Lets its prey fall into its trap, then eats it whole.

Debates about whether an intelligent designer exists have wracked the universe for as long as people have been around to argue about them, but anyone who has seen a coleomyr can agree that if such a being exists they must really, really hate anything living on the ground.

When the coleomyr surfaces it looks like a great yellow-brown mountain. Four layers of plated carapace arc up in huge spikes to the crest of its back, down which runs a trail of spines. In the midst of its massive girth sits a comparatively small head, which boasts a pair of horns as well as a set of spikes on each cheek. Its main eyes sit beneath heavy armoured brows, with three small eyes huddling between them and another pair off to either side. Its enormous nostrils, gushing hot breath that makes dust devils of the sand around it, are the last part of its face visible above the surface.

The rest of its bulk lies beneath, except on the rare occasion it rears. For ease of burrowing through the earth its limbs are four mighty shovels tipped with many brutal claws, the forelimbs larger than the back. The typical coleomyr possesses an overbite and a chin that juts out to help keep dirt from hitting its face. Its body ends in a small, stubby tail.

Coleomyr eggs, between 20 and 50 feet tall themselves, can only be found deep enough in the crust of a planet to be warmed by its mantle. They can incubate for centuries before the coleomyr detects the right conditions to hatch under. Once free it will dig its way to the surface, where it will seek out a sandy spot to construct its first hunting ground.

It does this by welling up saliva in its huge jaws and spitting it into the sand. Once the sand is saturated, the young coleomyr will stir it with a forelimb to create quicksand. Anything that treads on the innocuous-looking ground and struggles to escape will only sink deeper until it is completely trapped for the coleomyr to eat at its leisure. As it grows, the coleomyr will make more and more pits that it will travel between to maximize the amount of prey it catches.

Recently, massive cocoons discovered in caverns deep beneath the surface revealed that this is not the end of a coleomyr's life cycle. After some time - perhaps still more centuries - the apparently larval coleomyr must wrap itself in these to prepare for its final stage of life. Unfortunately the time this takes is so unimaginably long that no recordings of it exist. Fortunately, this makes it a great subject of folk tales.

Quicksand Trap: Beware a patch of quicksand in the desert, as it's likely the work of a coleomyr. For any victims not careful about getting out, it might be too late to seek help before it returns to make a meal of them.

• If two larval coleomyr meet, they will usually fight to the death in an earth-ripping display.

• It's rumoured that coleomyr saliva has healing properties. It's so hard to get that it sells for a fortune either way.

• While coleomyrs have never been bred as official notail capture creatures, a few legendary individuals have managed to capture and use them in the past, much to the horror of their competitors.

-Back to Fauna Menu-
< Cloud-Gulper
Crab >