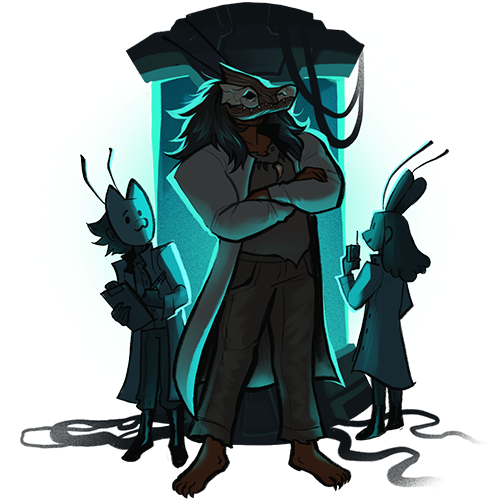 “We once lived with nature for so long! Hunting in woods, killing in groups with hand and claw! Now I look at you all, sitting behind screen, sending robot to do what you were born to do! This is a sickness. This sickness is called society! It has ruined this species. We must go back to roots! Back to where our ancestors came from, and then we must improve with evolution! No more religion, no more computer, no more farming, no more guns, no more separating ourselves into classes for minor differences! We are notails! Rulers of the universe, but way we control it is shameful! Bah! I do not wish to play this game of society with all of you idiots, but I must. Only so I may bring some respect to this sham of a species! -w-” — O-7's speech 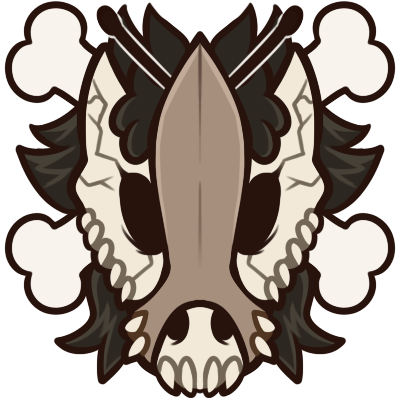 Job: Notail Leader of the B-class and I-class
Likes: Untamed wild, Animals, Plants, Yelling, Documenting the wild, Building items by hand, The art of healing, Evolution, Gene study
Dislikes: Cities, Social norms, People with "bad" genes, "Worthless" people, Technology
Notable contributions: O-7 is the leader of the B-reeder, and I-nvestigator class. While he could care less about the I-class operations, he is very active and vocal about improvements that need to be made to the notail genes. Due to his actions, several issues have been removed from the species. O-7 also watches over the operations in the notail woods.

The largest of the O-class is a goliath of a notail in every way possible. He is heavily built and is happy to throw his weight around in a brawl. His antennas stick up in the air, and his tan skin accents his bone-craved mask. It displays the creature that he admires the most, the crocodile.

He wears simple clothes, often damaged or stained, and frequently walks without shoes. On long trips into the wild, it's said that O-7 doesn't wear clothes at all.

If there's anyone out there who is more dedicated to the ideals of survival of the fittest more than O-7, inform him immediately, as he's always seeking new challengers.

He has "animal-like tendencies," such as hissing or snapping at others. He has also showcased territorial aggression at times, especially towards objects that either took him long to create or are rare finds. Some of these items are bones, which he collects, sometimes piecing them together to display the whole skeleton. He also engages in taxidermy, for his self-explanatory, "hall of deformities."

O-7 does not mesh well with his co-workers or other notails. He finds their often passive-aggressive undertones "infantile." Likewise, attempting to charm or convince him on a subject based on emotional reasoning does not work as he doesn't care about people's "sensitive feelings."

Aggressively blunt, O-7 frankly could care less if his comments makes anyone uncomfortable. Being uncomfortable is for the weak. His belief in his survival lifestyle, combined with his beast collecting and breeding, gives him an extremist mindset. Like he does with his project animals, he sorts notails into three categories. Breeding stock, useful duds, and feeding fodder. O-7 has a remarkably good eye for the habits of others. He notices subtle movements such as slight limps, posture, breathing timing, and more. Everything is essential when picking breeding stock, as one faulty gene could collapse the cultivation of a project.

Breeding stocks are those at the top, with little to no defects and good genes. Useful duds include most of the population. These are people with one significant "defect" or a few too many small ones that make them unfit to breed. These defects are not so severe that the "dud" cannot contribute to the group, and as such, they are still beneficial and deserve to live. Lastly, the feeding fodders are self-explanatory. These are people O-7 deems "useless" either genetically or because they are too lazy to "contribute to the whole." He proudly states that the best life those who fall under this section could ever hope to achieve is being made a meal to some fauna.

Those who have what O-7 considers defects or "lazy attitudes" include people who work jobs that aren't physical or require computer usage for the entire time. He is extremely harsh to these peoples and notes that it would be better if they died instead of waste resources. For those reasons, both O-2 and O-4, who typically stray from physical work are considered worthless to him.

It should be stressed that O-7 does not believe in mental ailments in any shape or form and is quick to insult those who bring these topics up to him. He especially does not believe in the concept of depression and believes it to be "genetic laziness." He is equally awful to those who are born with a physical disability, but not those who gain one later in life. He taunts such people, informing them they would have been better off killed at birth.

Nicknamed "The Neo Incarnated" for his extreme views, will to survive, and hate for societies of all types, his beginnings are frankly humble.

His life was like any other notail, and his first 30 years of life are of no particular note. He felt dissatisfied and aimless with his V-eterinarian tasks. He was referred to a N-eo class for a mental evaluation and stated that he was "annoyed by what they told him." He decided that if society could not help him, he would help himself. When he left to enter the wilds of the planet, those around him considered him good as dead.

But he thrived within this new world.

He built structures from the ground up, loved off the land, and befriended wild fauna. His life had been improved dramatically. Feeling tricked out of 30 years of his life, he decided never to go back. The outdoors were his home now.

For the next eight years, teams of notails would come back with news of a monster outside of their city. They described a beast that stood upright and coated in hair. These reports were ignored as misinterpretations of any of the strange faunas that could be found around, until one day, a team came back with "the beast of legends" in hand. They had assumed O-7 was a notail who had gotten lost ages ago and sent him back to be checked over by an N-class.

He refused to accept anything they told him. As he viewed civilization with new eyes, he found the universe a disgusting wasteland of unused potential. In the wild, he learned the true strength of notail kind. He overpowered the N-classes that attempted to contain him and escaped back to where he belonged. Once they knew the truth of this "beast," they sent notails to capture him, believing that he was in desperate need of a doctor.

He did not want to be taken back, however, and he fought with all who tried. In one instance, he shoved notails in mud, only to watch them react with disgust. He mocked them and asked for the strongest notail to fight him. While his case was labeled a futile effort, the O-3 at the time took rounding him up as a challenge. O-3 was the ultimate beast tamer and assumed this would be a simple job to put this "myth" to shame.

....But as he found himself face down in the mud by the notail of legend, he couldn't help but curse the ideals of such an absurd beast. When he killed O-3, he shrugged and made it clear that murder of one's own species isn't usually the most optimal plan but that he hopes everyone else gets the message to leave him alone.

Unfortunately, for murdering O-3, he would now be forced to take the O-3 job or be jailed for his crimes. Unable to find a way out, he accepted the position.

Everyone expected him to be a failure at his duties, but he was more than delighted to improve the breeding system of fauna, and when he traded jobs with the O-7, he got his hands on the prize he always wanted. Notails.

While he advocates for the "reversal" of all species to an "improved primal form," he understands that his ideas are not popular among the crowd. As long as he is allowed to work on his personal projects, he will "stick to the notail plan." Due to this, the rate of experimental notails created for more wild exploration and projects involving mixing the genes of two notails instead of just refining the genes of the best have gone up.

His trips into the wild haven't stopped. Whenever he is given free time, he can be found in the wild, building basic tools and surviving off the land. He often has to be wrangled back to work, and if not for the trackers placed on him, the other O-class are sure he'd leave and never come back.

Weakness spotting: Nothing escapes the eyes of O-7. Any slight weakness in a person will be undoubtedly noticed. While he uses this skill to find the best breeding stock, he's not shy about using it against attackers to learn their flaws, not only to counter but demoralize them. Those affected by his "harmless words" of noting deformities or unwanted physical traits are considered weak-willed and easy prey.

• His short way of speaking is intentional to be blunt and to the point. He sees no reason to speak full sentences if fewer ones are just as understandable.

• Tales that O-7 is working on a secret project of feral notails, ones who are able to live without tools or supplies. While there is no definite physical evidence for this, shaky low-resolution camera footage has been filmed of a possibly large and hairy notail roaming the edges of civilization. When questioned O-7 remarked, "Wish they let me do that! Sounds better than current project. -w-"

• O-7 hates all religious texts. He is known for stating that "The gods are just story, and book cannot hurt you unless thrown! -w-"

• It is unknown why O-7 considers himself a "useful dud." When asked he stated, "You stupid? Why would I tell weakness? Brain like yours would make good feeding fodder! -w-" 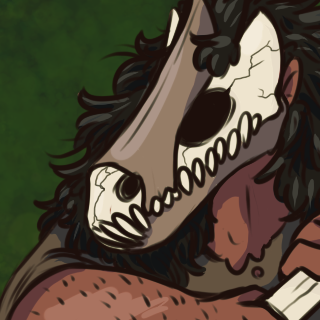 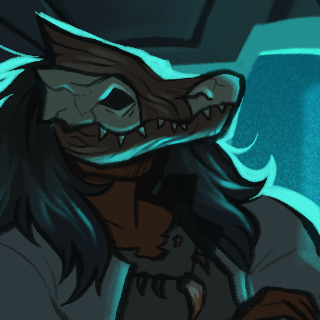 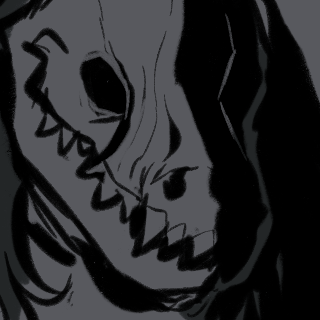