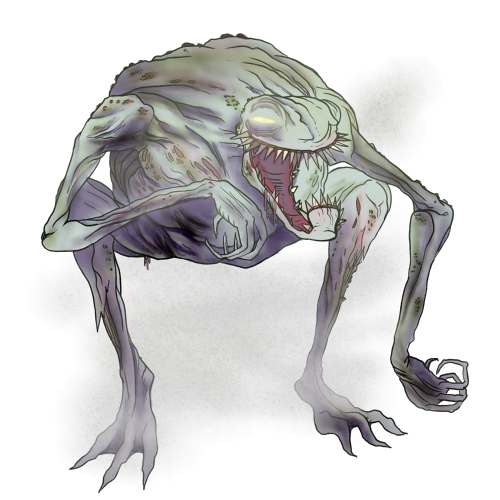 “Who just leave a ball of meat laying around to rot in a swamp?” — Someone about to be consumed

At first glance a bloater appears to be a bulbous lumpy mass of decaying, sickly gray flesh, roughly three feet across. Their skin is greasy and covered in sores, seeping noxious fluids from their pores. It reveals its true form when it detects potential prey, springing up into a tall lanky monster, with long spindly limbs. They have large hands with six digits, and large feet with four.

Bloats seemingly don't have a neck, simply transition from bulbous torso to a bloated head with a wide jagged frown, wide narrow eyes, that in a moment open into large sickly yellow spheres withing their grotesque skulls. Their mouths hardly seem capable of consuming much, but when they eat their mouths grow obscenely large, capable of consuming many creatures whole.

While bloats are already decidedly, bloated, they swell noticeably when they're consuming creatures. When they eat too much, they become bloated to the point where they cannot move, and thus they enter into a period of hibernation.

Bloats are, at first glance, lazy and passive. One will likely find one in its dormant state, and conclude that they are asleep. This is not the case, they are simply waiting for something to approach, and when it does, then they swiftly spring into action, spewing horrific, disgusting bile, at whatever creatures are nearby, before extending to their full height. This bile has paralytic properties towards most creatures, and so those unfortunates who are caught in this sucker-spray are consumed immediately.

Those creatures that are "fortunate" enough to avoid this, are then hunted down. Bloats have surprisingly developed sense given their sluggish demeanor and rotten appearance, so once on the trail of an escaped victim, it is very difficult to lose them. They will go to no end of lengths to capture a creature that escapes them, Only interrupted by the presence of other prey that it deems easier to catch, but even then they will usually resume hunting their original prey.

It has been observed that bloats that continue to fail to catch prey, or are otherwise presented with far too many choices in prey will become confused, and then frenzied, going wild and consuming creatures until either none are left or they overeat.

• Bloats will eat most anything that lives, with the distinct exception of other bloats. Nobody's certain why though, as it's certainly not their disgusting nature, as their putrescent bile is quite disgusting.

• It's believed that creatures consumed by a bloat are entirely alive and conscious for the duration in which they're being consumed. Nobody can confirm this however, as their are few if any people who've survived after that point. 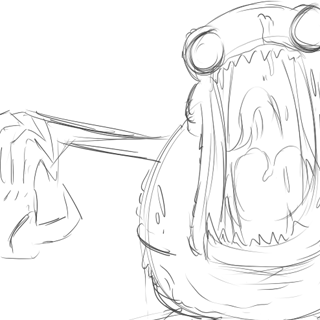