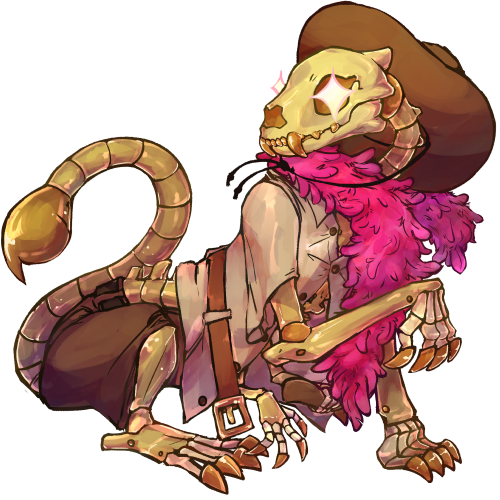 “RHEA, HONEY, NO!!!!!!!!” — Comment by a Rhea owner as she charges into greet a newly discovered and uncontacted species

Likes: New things, Species, Fauna, Anything living, Investments, Helping people improve, Children, Big scary looking monsters, Justice, Fairness, World building
Dislikes: People destroying things before they can be cataloged, Having her info rejected and forced back to her, Having ideas overlooked, Being confined
Attack Method: Rhea units do not commonly attack, instead, they use their high defense to negate the damage and move on. As Rhea units have a high tolerance for harm and can repair themselves if need be, they have no attack method other than summoning others for help. Many Rhea units can wait centuries for help to arrive once finding a location to hide in.

The common Rhea ship is called the "black box" for being heavily armored. While the amount of living space is abysmal for its size, the amount of storage space is high. These ships tend to transport highly valuable, or newly discovered items from planets only recently found. Should all the ships around it fail, the Rhea will stand to bring back the news.

[Ambitious] Neutral trait
This character has strong ambition for a goal or several goals. They won't be easily dissuaded from a course of action. The ambition this character holds may be for the better or the worse.
[Affectionate] Neutral trait
This character cares nothing more then to watch out for and take care of other characters. They commonly end up the "parent" of most group and do their best to keep everyone in high spirits.
[Species Lady] Negative trait
This character enjoys the company and ownership of a particular fauna very, very much. Now they have too many of them. They likely smell like the fauna, will risk their own well-being to defend any attacked members of that fauna group, and have trouble not taking in any new fauna they see.
[Object Whisperer] Ability trait
A character with this trait can sense meaningful events or people that an object has been through or met. The more sudden the event or familiar the person (to the object), the easier it is to get a clear picture of what happened.
[Call The Cavalry] Ability trait
When activated, this ability will summon a random character the user has met to the scene. This character needn't necessarily be able to help and may make matters worse, intentionally or otherwise.
[Extreme Cosplayer] Mystery trait
You're a little too in character.
[Extreme Stealing] Mystery trait
Able to pick up items that normally cannot be picked up and put it into their inventory. Example: Fire.
[Special Eyes] Ability trait
This trait makes a character more liable to spot anomalies, or otherwise otherworldly and strange events.

Rhea AIs are hilariously barebones, appearing as a simplified lion like skeleton with two visual sensors, one tail ending in a solid bulb, and two smaller arms under the body. Most who view a Rhea will not see it in this form though, as all Rhea units have a robust inventory system that contains all they need to create a new look.

The skeleton of the Rhea is easily adaptable, with parts being able to be removed and added. Rhea units will use the material in their inventory and take hours to days to build a disguise they can wear. Their costumes range from masterpieces that cannot be distinguished from the real thing at a distance, to shoddy mascots that while are charming, fool no one.

Rhea are excitable AIs that are always ready and willing to meet new species and travel lands untouched by technology. Their emotions are frequently not picked up as they have no way to express themselves visibly except by flashing the lights in their eyes, a move that blinds them for that moment. This is why Rhea units have an intense affection for costumes. Costumes can reflect the emotion they want to show easier.

As they travel, they are eager to interact with new things, sometimes too keen. They will wander off and may communicate with a species while disguised with no fear. Attempts to herd them back all but fail. They are known for collecting specific fauna they find and dragging them back to camp as pets, much to the dismay of the group.

When not causing suffering, the Rhea AI is extremely parental. Warning crew members when they are overworking themselves, not picking up good habits, or need time to relax. While the excitability of the AI scares many, those who work with Rhea units say that it grows on them, and there's nothing better to do than to chill out while them and the Rhea unit relax after a hard day of work.

While on standby Rhea units channel their thoughts into imagining creatures and worlds out there. They will draw images of what they believe exists, and what they will do when they meet them, sometimes writing long, complex stories, often tossed aside as "fanfiction." Many Rheas will draw out these situations and paste them on their walls. More than a few times, these drawings have turned out to look extremely close to a newly discovered species or fauna. Some believe that Rhea units know what's beyond the stars, but many scientists say this is just a case of a million monkeys on a million typewriter. Sooner or later one of them is bound to smash out a comprehensive sentence by pure chance.

Rhea units are explorers. They can explore in a group, or alone though prefer having their "family" around. Rhea units can travel in the harshest environments, from planets consumed by their oceans to planets close to erupting in flames. Nothing stops a Rhea unit from their ultimate goal. Locating something new, and finding what its purpose is. Rhea units are most excited about species and fauna, but will also happily gather up plants, fungus, and rock samples.

While Rhea units prefer company, they were designed with solo missions in mind. They would blend into their environment, collecting and preserving many samples for sometimes years before being gathered for a review. They would talk about highlights on their mission, and the objects they found extremely interesting.

The AIs are outfitted with a complex scanner that can give the Rhea a general idea of what the object might be, and can break down the item to see what its overall makeup is for an even more in-depth look. The units can sometimes be seen talking to objects for fun or alerting people to an unknown danger from just a glance. They are not always right on their guesses, so proper tests should be conducted to make sure the conclusion the Rhea has gotten to is correct.

If the Rhea accidentally, or purposefully interacts with a new species, they will attempt their best to act like an ambassador, while also leaving out vital information. Sometimes to avoid tainting the species with outside knowledge, and sometimes to prevent scaring the species into worrying about an upcoming invasion.

If things do get tough though, all Rhea units are equipped with a distress signal and have the power to lay in waiting until help arrives even years down the line. If any crew picks up a distress signal from a Rhea, the likelihood that it is on an undiscovered planet is high.

Due to it's wandering ways, while one can keep a Rhea in a home situation, it is not recommended. If not allowed out the home the Rhea will delete its memories of the concept of all objects in the building and begin to pretend it's an alien world. In extreme cases, they will even rearrange the household and paint images of made-up aliens on the walls. If allowed to roam their actions are less severe, but residents may be annoyed with the Rhea scanning and attempt to catalog them like a wild animal.

Cronus: Rhea is Cronus' wife, and he loves her and her affection towards NPCs with all of his lack of a heart. He just really wishes she would stop making new species and fauna that everyone knows will never be accepted by the universe. The comment "Rhea, honey, no" has been echoed by Cronus for years and yet she refuses to stop.

Rhea has power over an essential domain, species. She is typically seen as the mother of species as she lines up species to be found in the universe. Rhea may also create a few procedurally generated species, which will be checked by Cronus to make sure they are safe for the universe. If any dangerous ones get through the gates, they will typically be killed by the notails who act as the white blood cells of the universe.

If the player has user-created species on, Rhea will hand pick species from there to add in following the player's filter as best as possible. Yet again, Cronus is there to double check, and notails are there to remove species that slip in.

Without Rhea and other gods who control generation, the species level will cap suddenly. Newly discovered planets will stand uninhabited. The universe outside of what is already discovered will suddenly become very empty.

Rhea will also be able to point the player to planets with species they have yet to locate before, meaning Rhea is an excellent way to discover new things.

Godheads of Rhea will always gain both the trait [Extreme Cosplayer] and [Extreme Stealing]. The godhead will become a living skeleton with a core, which if destroyed will kill the godhead. As the godhead likely cannot roam the universe in peace while being a walking talking skeleton, they will be forced to take up outfits to keep their identity, and weakness a secret. Rhea godheads will feel an intense call to adventure, summoning them over to new places. They will become fatigued and irritable if sent to too many populated planets in a row.

Flattery will get you everywhere. When a Rhea unit dresses up as a species, many of that species cannot feel but utterly charmed at the AI, and as such are much more willing to be receptive and friendly to their new costumed friend.

• Some Rhea AIs who are disallowed from exploring have become best selling adventure novel writers due to being forced to make up their own universe in their mind to make up for the lack of freedom. Despite their successes, all the Rhea units note they would have preferred freedom over fame.

• While most Rhea units can last up to 500 years in distress mode, a few of them have been found up to 1468 years later still calling for distress.

• Rhea units are often sent ahead of colonization ships to scout out planets for livability. The next step in the process is to send ships with settlement planers. A common AI for the job is Cronus, who always seems happy to see a Rhea unit. The two AIs are seen as a "couple."

-Back to AI Menu-
< Prometheus
Saturn >