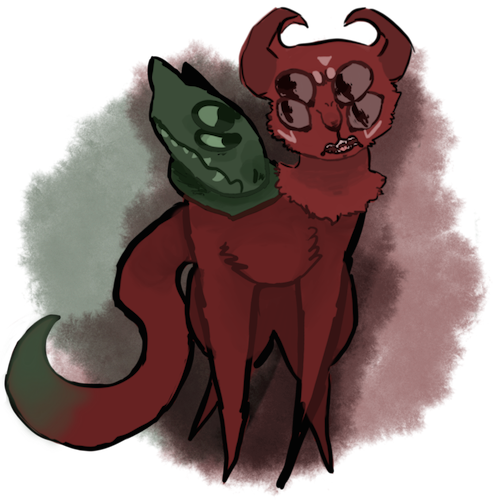 “They seem to be rather distant.” — Unknown

Common Jobs: Anything that has to do with fixing things.
Likes: The cold, Dark areas, Open spaces, Rain or snow,
Dislikes: Heat, Closed in spaces, Loud noises

Attack Method: They tend to attack from behind.

[Collector] Neutral trait
This character has a collection of items or does lowkey hoarding of random objects they find. They are more likely to pick up just about anything they find and check it out. If an item is removed from their collection without their approval they may become minorly distressed.
[Getaway] Positive trait
This character always seems to slip away at the last moment. Whenever they are in a group, they automatically escape if they try.
[Easily Agitated] Negative trait
This character is easily agitated and if not given space they can burst into pure anger

The taeking do not seem to honor any gods.

The taekings are tall, slim and usually come in a shade of red. They have two heads, one of which has long, pointed ears and smooth, sometimes fluffly fur. They have short muzzles and their resting face is considered rather serious. This head also has four eyes and a black pointed nose.

Their other head is covered with dark green scales, has really short pointed ears and also a short muzzle. Their teeth are usually visible with their mouth closed due to how long they are. This second head also has three eyes unlike the four on the other head. The eye color of the taeking is usually a dull color, not bright.

The body of the taeking is covered in fur, and they somewhat resemble a cat with long legs. Taekings tend to have white markings on the main head, usually arrow shaped, but they can also be stripes, circles, and star like. The skin of the first head is not very well protected meaning they can get wounds and infections easily, but the second head is more protected due to the scales. Taekings have a single fluffy tail, that transitions into scales by the time it gets to the tip.

The taekings are smart, but they are doubtful, rude, and they don't like getting help from others unless in dire need. They are secretive and sly as well but lack in social skills. They can get easily hurt emotionally but tend to not show it if possible. They don't like being mocked or teased, and can lash out when either of those happen. Taeking don't speak much to avoid saying anything that may get them harassed.

Taeking are stealthy and like to mess with others. They collect many things, mostly metal or valuables. They have a interest in fixing things like ships, tools, etc. They enjoy rain, snow, hail, and strong winds.

The homeplanet of the taeking is a small, grey and black planet with little light reflecting on it. Not well known and no longer a home to most taekings. Although some still linger there.

• Taekings don't wear hats because they want their ears to always be visible as they are rather proud of them. If they can find a hat with holes for the ears to fit through they may consider wearing it. Taekings prefer to wear scarfs above all else as it makes them feel comfortable to hide the connection between both heads. People being able to see that part of the neck makes them feel uncomfortable. 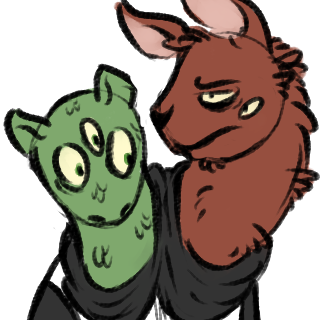