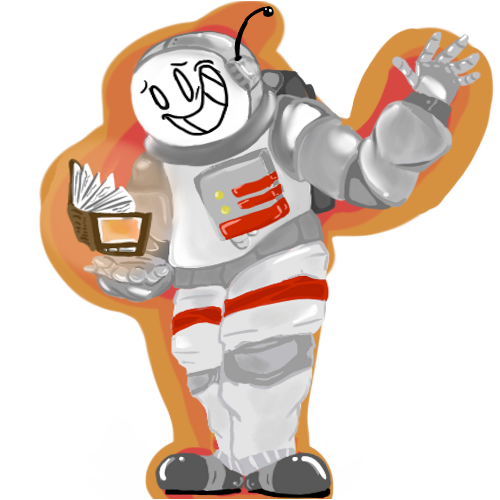 “No god, no masters, only you versus the world.” — Unknown

Likes: Organics, Fire, Space, Teaching others
Dislikes: Nothing except for things that dislike him
Attack Method: Only acts in self defense and in the defense of others. Shoots out flames in hopes of disabling the other person with pain and fear.

The common Prometheus ship is called the "Fire Bringer" as when it is attacked it teleports fires on to the attacking ship, destroying ships from the inside out or until they surrender.

Consorts of Prometheus get +1 to every stat.

A Prometheus is very notail like in form, as was intended. Prometheus units have two legs, two arms, and one head, nothing about their shape being out of the ordinary when compared to a notail. A Prometheus appears to be a person in an old age space suit, back when they were bulky and had a sphere for a head. The head of the Prometheus tends to be either completely black or white when it is not active. Prometheus units seem to protect their heads from being pulled off, but the reason for why is unknown as pulling off their head just shows that there is nothing under it, the head is just a spherical screen and all the important parts are in the body. When shot or hit in the head a Prometheus will play dead, before rising once the danger is gone.

Many Prometheus heads are different types of helmets with visors or screens on them as the "face" of the helmet. They are able to remove their original head and put in a new one if they so please.

The head of a Prometheus shows emotes on it. Prometheus units almost always seem to be showing happy emotes on its face, even in moments where it's not prompted. When a Prometheus does show an angry or sad emote it is almost always for a few seconds, quickly attempting to regain their composure as they put on a nice friendly face for the crowd again. They are also known for displaying short words or pictures on their screens to assist with communication, such as showing a thumbs up or the words "Ok" when trying to send the message that they approve of something.

Prometheus units are rather friendly AIs who are quite upbeat. They will gather up a nice social group of organics, seeing as they are unable to befriend any AIs. These units adore sharing and attempt to share anything they have with them. They rather dislike people who hoard items and money for themselves, but will just complain on the side about it, not quite doing anything about it. If a Prometheus has nothing else to share they will share the knowledge they have gained over the years. They just love talking about philosophy and animals.

Whenever they see someone in need of something they attempt to find it or they give the other person any items they can in an attempt to help.

Prometheus units have a bit of a sticky finger habit. They tend to steal items of value that other people aren't using. Things such as an expensive collectible baseball bat on display may cause confusion to the Prometheus. To the Prometheus it would be better to give the bat to someone who can use it, rather than keeping it in a glass case to be admired for some reason. Most Prometheus units have to be taught that stealing isn't ok, and while many Prometheus will follow the rules they will still be disgruntled if told they can't play with the baseball bat because it's for viewing, not using.

Some Prometheus have gotten a bad rap for this, but overall Prometheus units are fairly liked in the universe for the work they contribute in other manners. If Prometheus units didn't scare other AIs away from areas they surely would be far more common everywhere.

Even though Prometheus units love to question the universe itself and people's purpose in it they never seems to have a negative outlook on life. They seem firmly rooted in the idea that all life has a purpose, a meaning, one that everyone is working towards even if they don't know what it is.

A Prometheus unit believes that in the end, everything is going to be alright.

Prometheus units were one of the first AIs made, and due to certain reasons are one of the only AIs treated fairly by the notails and other species. Prometheus AIs are so protected that a person would be unable to buy one unless they signed a contract that the Prometheus unit would be treated well. Prometheus units get to carry their own controller and are legally allowed to leave their owner if they are being heavily mistreated. As such it is not recommended that one buys a Prometheus if they plan to use it like any other AI or robot, there are many more AI types that allow people to do whatever they want with their metal companion.

Prometheus units do best in situations where they are treated like any other organic, being able to do as they please, though they will be happy to help with things they are asked to do. What Prometheus needs is a choice in the matter, something other AIs do not get to have.

All gods: All gods fear and avoid Prometheus. Even some gods who once liked Prometheus before his punishment now fear Prometheus due to years of hearing untrue rumors that Prometheus would strip the power of the gods away to give to the people.

Prometheus powers have been disabled forever. Prometheus sits in punishment for giving the notails the knowledge they needed to take the original AIs, who just roamed as free roaming viruses, out of computers and put them into bodies. Prometheus had hoped that the notails would use this knowledge for good, as he was tired of the gods mocking the living, but instead the notails decided to use AIs like slaves.

So Prometheus was punished, and to this day is still being punished, for while his gift to the world had greatly improved the lives of the notail, and later the whole universe, it came at a cruel price.

Before Prometheus's powers were stripped from him he was able to create new fauna.

As a patron, all gods will fear the player, knowing that they must have pulled a great feat to free Prometheus from punishment. A player who could do such a thing likely has a good head on their shoulder. Prometheus is the biggest cause of fear though, as Prometheus is able to rob the power of trapped gods and give them to the player. While the god will still be alive and immortal, they will have lost all their power, and as such can never return to doing their job. Any systems they may have been holding up may fail as if they were dead. Be warned, Prometheus can steal powers from the player and give it to a god or even an npc if he so wishes. If the power is given to an npc they will not know about the truth about their universe, and will still die if they learn it.

Prometheus has the most powerful godheads of all, with them having the stolen powers of the gods. While the godhead will be as powerful as a god they will be unable to replace that god in a work fashion, thus not being able to stabilize a system ruined by the god's power being stolen. The godhead takes on the physical traits that would be given to them if they were godheaded by the god whose power they now have.

Prometheus godheads are impossible to control and they do as they please. The player trying to tell them to do things are but idle random thoughts in a godhead's mind, quickly tossed away if they don't fit the needs of the godhead.

Unlike most gods, Prometheus can godhead all of his consorts and godhead any species who could once be blessed by the god whose power was stolen.

Fear. Fear is the special trait of Prometheus. Not only do the AI gods fear Prometheus, but most Prometheus units even strike fear into normal AIs. This fear is even ingrained into roman AIs, who will avoid any Prometheus they see if possible. AIs who are custom built or not romans or greeks aren't inherently scared of Prometheus, but they know that Prometheus' disables AIs and keep away just in case.

• Prometheus units have caused people to panic and flee an area as they can be easily mistaken for humans. Remember, if you feel an overwhelming and consuming fear, a fear greater than anything else you've felt in your life, it's a human. Else it's a Prometheus.

• Some anti robot conspiracy theorists have been known to dress up Prometheus units to scare AIs away from their land. This doesn't typically work cause robots can tell when something else isn't a robot, but most robots will still shy away just in case.

• As humans and Prometheus units look alike drawings of an astronaut have become the universal symbol for "A cursed land." Commonly this means that the area is unfit for both organics and AIs, or that a horrible event has transpired here and all are warned to stay away from it of else. 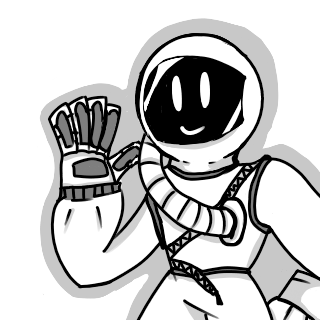