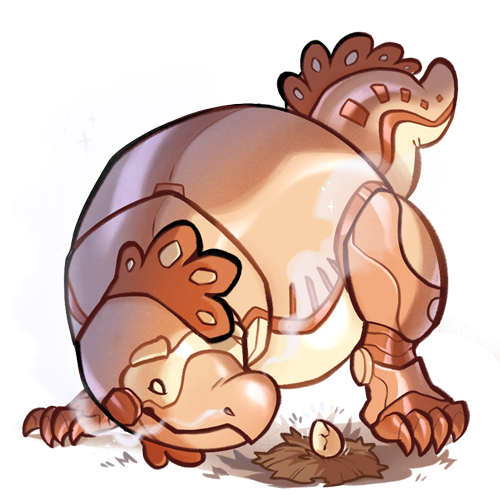 “Currently out of 1000 eggs placed in, 300 have hatched with 400 already showing clear signs of entering their hatching stage and---- ahbobobobobobo look at that wittle baby! Who is a cute special albino? You are! You are!” — A Saturn giving a status report before becoming distracted

Likes: Children, Gifts, Staying still, Crowds
Dislikes: Change, Being bossed around, Hatching day
Attack Method: When attacked, a Saturn will reroute all its heat towards its head and unleash a scorching blast of air at the enemy. Attackers are known to pass out due to the heat, get burned, or even melt away.

The common Saturn ship is known as the "Eggcarrier" due to its payload.

Saturn adds +5 strength to any species that is his consort.

Large and in charge, Saturns come in many shapes and sizes, but one thing always stays the same, they're massive. The most well-known Saturn units are round two-legged bipeds with a soft underside but hard top. The AI core is hosted in the middle of the body, allowing the tail, legs, and head to be detached to create a more typical incubator.

The head is of a snouted avian with soft, pliable rubber for the first half of the face before halting to make way for the optical screen. Expressions are shown via this device though it contains too small of a resolution to showcase complex images. Despite this screen's location, the unit cannot see out of it and is not affected should it be destroyed. A Saturn instead has four pairs of external eyes, top and bottom of the body, tail, and above the nostrils. The comb and waddle are different from generation to generation and can be customized with ease.

A Saturn's large size causes an awkward but sturdy walk when they move. Once filled with eggs, this gait becomes even slower, but the units are not prone to tripping due to their overprotectiveness of the cargo.

While this is the most well-known formation of a Saturn unit, other models exist to fit the needs of species with fine-tuned brooding requirements. Examples are a version that lives in water and has the appearance of a seahorse and gargantuan sized units that can hatch and house their brood for months.

The only thing bigger than the size of a Saturn unit is the size of their digital hearts. While notable monotoned for most occasions, they dote on workers, kindly informing them of their needs. Despite their outward seriousness, they melt into very emotional baby talk when encountering an object of extreme affection.

These units only become crossed when their requests go ignored for too long. Not an AI to sit by helplessly, even the fullest of Saturn's will attempt to complete work by themselves, to the dismay of those who want them to stay put.

Hobbies are often given to Saturns to preoccupy their time and make them less likely to become antsy. They are dedicated AIs who are always happy to speak at length about their wisdom, even if they are not distinctly intelligent robots. While their current hobbies and information on how to take care of their brood is their favorite information to speak at length about, they are also partial to imparting life lessons.

If any person in the universe comes to a Saturn to seek a parental figure, the AI will be there for them.

Originally commissioned by migrating species who needed a reliable way to store eggs while on the move, the units have mainly been reduced to sitting egg carriers. They are perfect incubators programmed with ease for different temperatures, locations, and situations. Even for poor programmers, there are sites that crowdsource the creation of hatching plans due to most Romans being open-sourced.

This protective bot will risk its life for its given brood using its heat-based attacks. Older Saturns who have been in fights have partly melted faces, exposing their large fused teeth. Despite their horrifying looks, these Saturns are no less friendly to those around them.

As it waits for its eggs to hatch, it views the inside of its body with cameras to ensure all is well. Unable to enter its own form, every Saturn needs a worker or two, often an Opis AI, on-call for internal concerns. They are especially prone to communicating when one child is not developing as quickly as the rest, allowing them to obtain the highest hatch rate possible.

Hatching day is both a tragic and exciting event. Units record the whole affair, calling for assistance for those having trouble and alerting others to unique colorations and genes. Once all the children are dried off the Saturn opens up to deliver his work. Not all Saturns unleash their brood right away. Some of the most massive can host child care areas within them, allowing the newly born to stay.

Saturn units do poorly if released out into the world. Frequently clueless and scared without caretakers, the giant naive bots falls into sketchy dealings. Illegal hybrid centers latch onto a Saturn if they can find it. As such, letting the bot go with no direction to head is ill-advised. A typical job taken by a Saturn, if not egg brooding, is a mobile item defense system. With a flip of a switch and a bit of code change, the great mighty egg carriers will treat whatever item, often money, like their children.

Opis: Saturn and Opis dumped their ex-lovers, Lua and Consus, respectively, for each other. They both enjoy how much they have in common, especially their love of taking care of others. While they disagree on specific issues, especially those involving Jupiter and his rule, they will set their differences aside to support the other.

Lua: Lua is Saturn's ex, and he often finds himself becoming upset by Lua's stalking behavior. Saturn has decided to take a no-nonsense approach to Lua, a rather aggressive AI, and attempts to blast her with a heatwave on sight. To Saturn's dismay, this has little impact on her attachment to him.

Titans: As Saturn was once the ruler of the Roman titans, they look to him when seeking help. They are always willing to side with him if an opening is allowed.

As a god of wealth, Saturn assures that the drop system is running up to code, fair, and well placed. Saturn is largely in charge of "chest-like" drops as opposed to enemy or shop loot. If the player angers or pleases Saturn, Saturn will lower or increase rare drops respectively. Destroying Saturn will likewise have the same effect but to more chaotic extremes should no one take the burden of his job.

As a patron, Saturn will inform the player of interesting loot chances they can obtain from a location. If asked to, Saturn can activate a "Golden Age" on a particular item to double its probability of being received. This can be done twice a day.

The last power Saturn has is his presence. The titans love Saturn, and as such, the usually recluse deities are more likely to appear as long as Saturn is around.

Godheads of Saturn become larger, fatter, and often gain a waddle or comb to complete the look. Gaining a sense of authority, these godheads love to dominate and order others around. When they open any chest or loot item, the rate for rarer items increases substantially.

• Species who are notably egg-shaped must be careful around a Saturn unit. Their aggressive need to make sure no egg is out of place often leads people to be added to their collection to hatch. 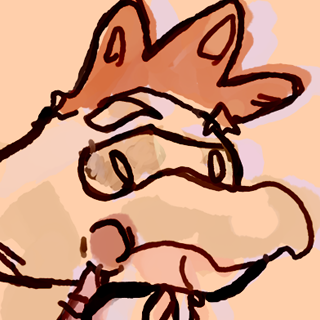