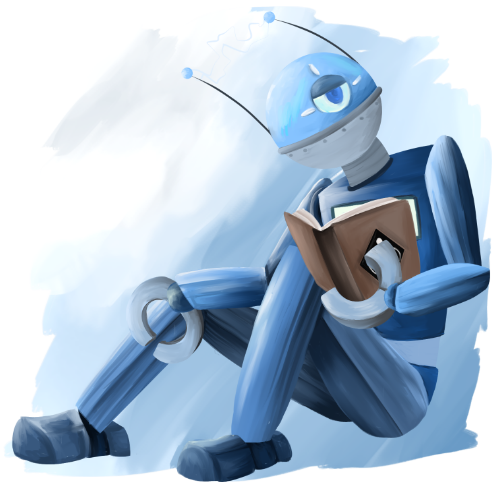 “No one knows who he is, and asking doesn't help.” — A somebody

Likes: Attention, Knowledge, Careful planning, The future
Dislikes: Focusing on the past, Being ignored
Attack Method: Coeus zaps out electricity when attacking, hoping to take the person down so that he or the people he is with can finish them off.

The common Coeus ship is commonly called "What ship is that?"

[Cautious] Neutral trait
This character will be more nervous of suspicious situations, and less willing to take risks. They may put extra effort into making sure everything is safe before feeling comfortable. While this normally makes things safer for them, it can also be a huge time waster.
[Competitive] Neutral trait
This character tends to be up for healthy challenges. If this character sees a co-worker or someone they see as a rival working harder than they are they may work even harder to compete with this person even if this person has no idea what they are doing or even if they exist.
[Curious] Neutral trait
This character has a general thirst for knowledge and tends to ask a lot of questions. They are more likely to investigate anything that seems out of the ordinary.
[Confident] Positive trait
This character is confident in what they do and rarely ever doubts themselves or the people they believe in. They're able to trust people and can raise the morale of people they trust.
[Cunning] Positive trait
This character is crafty when it comes to lying and deception, able to more easily trick others to get what they want. They may also have a knack for illusions.
[Cooperative] Positive trait
This character does wonderfully in team situations and is always willing to follow plans. This character is almost always ready and willing to help and others rarely feel this character is dragging their feet in a team related operation.
[Conscriptable] Negative trait
If a non-military or military emergency is declared nearby by an authority with jurisdiction over an organization this character belongs to, this character will be notified with a call to serve a duty. They can choose to accept or else they may face consequences for failing to serve. [Emergency Conscript] means the character only can be called for non-military emergencies; [Military Reserve] means the character only serves military emergencies. The range for emergencies the character can be called to depends upon the severity level of the emergency: for instance, a fire may only trigger reserve-conscripts within an hour's travel time; a rare event like a star forecast to go supernova may call upon all conscripts within two warps.
[Cryptic] Negative trait
This character speaks in riddles, code, and tends to be extremely hidden about their words. Due to this it's extremely hard for people around them to understand what they are trying to say. This character might be so dedicated to their riddles that they are willing to endanger others with their unwillingness to stop.

Coeus is a bipedal AI with a dome head. The dome is a screen which is slightly see-through. The screen normally will display a single, commonly described as bored, eye with three lines coming off it, but the Coeus unit can display any image on its dome. The position of the three lines around the eyes changes every generation but never within the same generation, making the lines a great way to tell a fake from a real Coeus. Coeus units have two antennas coming from the sides of their heads that point straight up. If the Coeus is in good health once or twice every minute electricity will spark between the two antennas. Coeus units are high voltage proofed and actually recharge when shocked.

Coeus units have two hands with pincers at the end of them. The pincers aren't the best at grasping objects, meaning if told to grab something it should be expected that they will drop it soon after. On the midsection of a Coeus is a screen. This screen displays whatever the Coeus unit wishes to show, commonly text, or images to go along with what it is saying. The screen can be removed and used as a tablet, doing this will expose the control panel of the Coeus unit though and should only be done when in a safe location.

Coeus is an imposing AI, not just due to his looks, but due to the way he suddenly enters a room without saying a thing. People will find themselves jumping in surprise at the AI who can be strangely light footed. When speaking with others Coeus units are quick and direct with their point, very rarely going on tangents or drifting in speech. A Coeus unit always knows what it wants and when they want it. Many enjoy Coeus units because they're not known for letting their personal feelings get in the way of their decision making.

Coeus is a fan of logic riddles, such as making a simple program with the least amount of bytes possible, and also common riddles. Sometimes Coeus units will look out for items that crew members might want, and offer them as rewards for solving these riddles. This may come to the annoyance of crew, as Coeus does not always take the crew member's interest in mind when dishing out riddles and puzzles. Coeus is known for giving programming puzzles to people who are unable to use a computer, and physical puzzles to people who cannot see. This sort of action is not surprising as Coeus units have difficulties relating to other people, both other AIs, and organics.

The reasoning behind a Coeus' seemingly scary actions and traits is that they often are unable to figure out what people are expecting from them. They understand that being assertive is what seems to get the job done, and thus do that. Coeus units have a hard time understanding that this can push people away, or cause them to jump when they enter a room. Coeus units wish for people to remember them, but are commonly unable to come up with topics that would be memorable in peoples minds. Coeus units will talk about matters that are important to them and subjects they like instead of subject matters that are important to the group, due to guessing that if they start a conversation, they control it, even if others are around.

Many people tune out Coeus units when they talk, attempting to figure out reasons to leave their conversations. As such most people only pay attention to Coeus units when they have a quest, puzzle, riddle, or challenge for the other person. Coeus units attempt to up the amount of quests they give to get more attention, only for it to backlash as people become annoyed with the subject matter they once found interesting. After awhile a Coeus unit either becomes used to this, or slinks away to do their job and nothing else, only peeking their head out time to time to offer a rare quest.

Most Coeus units are kept to store info and transport it faster than attempting to send it via wireless signal. Many Coeus actually stay on planets, where they serve as the head of large groups of servers, maintaining them and making sure servers are replaced as soon as they go down. When not maintaining servers they can be found following large ships and helping operations on repairs and upgrades. Due to this, the Coeus is commonly forgotten and stowed away when their work is done.

All Coeus units are linked by an emergency server system. If there is ever a situation where it's likely that massive amounts of important info will be destroyed, Coeus units will be forced to go to the area and download as much as possible and leave in an attempt to protect history. There are overrides for this, but many who own a Coeus accept this duty.

Zeus: Coeus utterly hates Zeus. He curses Zeus for tossing him into the underworld, making sure that everyone would forget who he was after all that time hidden away. In reality no one knew him before and Coeus over exaggerated how much people knew him before. After being let out of the underworld Coeus swore he would one day punish Zeus and told him just that. Zeus had no idea who he was and asked him to leave.

Tartarus: Coeus considers Tartarus his home, and also his friend. Tartarus is a fairly confused about who Coeus is but accepts him as his friend. While they are friends it's normal for Tartarus to slink away whenever Coeus moves the subject matter to things he wishes to talk about, without leaving an opening for others to contribute.

Helios: Helios and Coeus get along, both being knowledge gods. Normally conversations between them go wonderfully, until Coeus gets pushy, in which case Helios politely excuses himself and leaves the area.

Most people aren't sure what Coeus handles at first, but he is a god of quests. He handles what quests show up and make sure the universe has a nice even platter of quests to pick from. When he dies, there may be some unevenness to quests, such not enough quests showing up, too many quests showing up, an end game quest showing up on the first planet, or if things are really bad, the same quest may show up, over and over on every planet on an endless loop.

Coeus can auto complete a quest for the player once every three planets, thus giving the player the reward without doing any work. This reward tends to be reduced. The player is not able to pick how the quest is auto completed as it is picked at Coeus discretion, which is commonly a coin flip. At higher levels of friendship Coeus will auto complete the quest in what way the player wishes it to be and he is known to up the loot at the end of quests.

Godheads of Coeus commonly gain one large eye in the middle of their head, though it may just be drawn on. Godheads of Coeus have better decision making skills, normally able to guess what sort of paths may be coming up with shocking accuracy. These godheads are always finding themselves in the middle of situations as they sometimes cannot stop themselves from going in to situations that have high rewards and what they perceive as low risk.

• Asking a Coeus who they are doesn't work. They will commonly move subject matters away from this for unknown reasons.

• All Coeus units obsess over Zeus units. Some people find this rather creepy as they will make plans they will never do, nor have the means to, on how they will kill the Zeus.