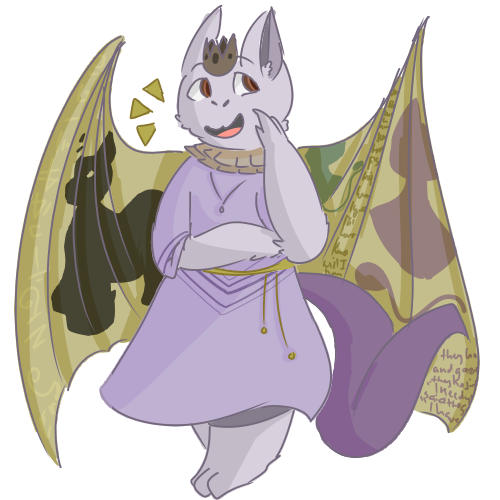 “Admit it. You've never seen anyone look as good as me.” — Majesty

Job: Professional Actor
Likes: Fame, Crowds, Books, Kno
Dislikes: Being a wallflower, Darkness, Time
Notable contributions: They have preformed in well known movies, and are often the one fueling gossip columns in the media.

It's almost never hard to pick out Majesty from a crowd. Despite their fur being pale like others of their species, they constantly don a paper crown. They're also commonly the only gnosis wearing any clothing at all- constantly switching outfits inspired by their favourite characters. The most common of this being a purple dress, tied with a gold belt. Their wings are also far more elaborate than others', the murals on their wings constantly being scrubbed off in favour of another, more wide and huge.

What really draws people to see Their Majesty in a crowd however, is their loud, seeming exuberant personality. They have no trouble whatsoever making their presence known, be it through yelling or through dramatic acting. People who initially meet them seem to note they're rather charming.

This opinion rarely last long for any person who questions any single thing about them, be it their acting or to their fashion sense. They have little hesitance in defending themselves verbally when they deem it needed. Most people find them difficult to approach after this. Most especially after they cover up their outburst with a charming, yet forced smile, telling the person to be on their way.

Any person who doesn't notes that Majesty barely allows anyone to have a word with them. They're most eager to talk about themselves, chattering about how good they are, and have you seen them in the news lately? They enjoy reminding others of their celebrity status, no matter how small it is in comparison to most.

Every gnosis in Istopia will tell you they're easily unbearable to be around. Majesty thinks their gift is a present.

Majesty never gives themselves a clear account of their history, and often merely calls it 'unimportant' and 'now, then, don't you believe we have far more important things to talk about?' The most detailed history they're willing to give is any small, glorified memories of their childhood friends.

It was in fact needed to ask the other living childhood friend they had for any details of their history. Their childhood friend and 'caretaker' merely allowed themselves to divulge some small facts.

"...Look, there's not much to them. They were just like everyone else. You know? They really liked books. In fact, they pretty much always talked about it. They never really wrote anything, but they always liked pretending. They always spent their time in this.. uh- roleplaying group?- that always played outside their house. Then in the small area that grew to the larger LARPing section we have back there.

They never stopped when they got older. They usually spent their time with them when I was busy, and sometimes even when I wasn't. They usually talked about it with me, and honestly, I never really understood.

But uh, you know the first movie they starred in? Yeah, the book adaption one. It was a buddy of theirs who started it. They invited them to play a leading role, and well. Needless to say, it was a clear success.

It was pretty much released everywhere, and while there were critics they'd always say, it never got them down. They enjoyed their fame. It was a welcome change to them. Most gnosis usually don't ever step out of the shadows, really. It was like they never got a shadow. They loved the spotlight.

Eventually, it faded. They didn't understand, I think. People remembered them, but they weren't significant enough. Their name was barely passed around.

Something changed in them. I wouldn't know. One day, they just said, "Kno, we don't really have much long to live, do we?"

I asked them what they meant. They never answered, and merely said they met someone who's lived for over a hundred years.

"And we live for thirty at most," they added.

It was quiet between us before they told me, "I don't want to be forgotten."

We never talked about that night, but after that, they applied for nearly everything they could find that would bring them on the screen. Even the smallest cameo, just being a stunt double, they wanted it.

It was sheer luck someone took them, and well. You know."

Here, they shook their head. They refrained from further comment.

• The only person Majesty truly considers their friend is the person who deems themselves in charge of them. As such, they're rarely apart.

• Their house, despite their constant bragging, isn't luxurious whatsoever. It's merely filled to the brim with their favorite items, and with fluffed pillows. In fact, it looks rather ordinary.

• Their favorite character is a gnosis named 'Loi', who is known for their tendency to stay out of trouble and create elaborate plans. They constantly dress up like them, and in fact was the person they first acted as.