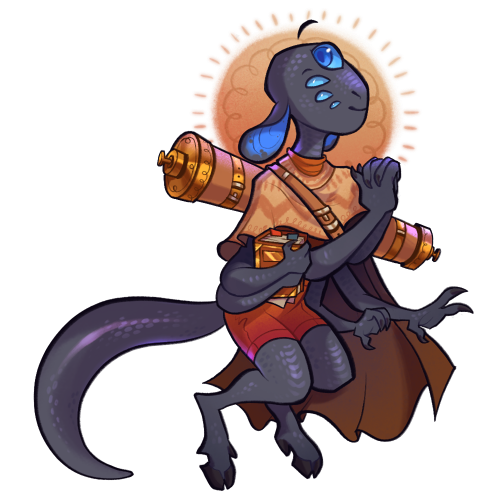 “Have you ever taken a moment to consider the Allseer?” — Zadrixes Soothsayer

Attack Method: Despite their views on violence, most zadrixes are not afraid to pick up a weapon and fight. They typically use throwing weapons or other means of ranged attack and prefer to stay as far away from their enemy as possible.

[Storyteller] Neutral trait
This character could spend hours telling stories. These stories range from personal life stories, to myths, to even things like gossip.
[Multitasker] Positive trait
This character is able to handle doing multiple tasks at the same time, and remembering exact instructions for them. Characters with this trait will generally prefer to handle multiple things at once.
[Overreacts] Negative trait
Negative trait This character is likely to overreact to a situation even if the situation is not major. This character likely sees issues as bigger than they are and commonly frightens others.

Zadrixes have their own gods, the main three being the Allseer, the Speaker, and the Listener. Most zadrixes are absolutely devoted to their beliefs and a good number of zadrixes stories revolve around their gods.

The zadrixes are medium sized humanoid mammals with reptilian scales covering a majority of their body, along a fairly long tail to keep balance. They're ungulates, with deer-like hooves. They have seven eyes in total, taking up most of their flat faces, with one large eye in the center of their forehead being the only one with a pupil. These eyes are commonly a bright blue, but can be any color. Zadrixes have two large deer-like ears, with the insides of said ears matching the color of their eyes. The most notable feature of the zadrixes is their six arms, and by extension, six hands. Each hand has two clawed fingers and a thumb. Due to this, zadrixes are great multitaskers.

It's rare to see a zadrixes lacking a poncho or a similar article of clothing. Each poncho is usually unique to the zadrixes it belongs to, though some ponchos are passed down through families or religious figures like soothsayers. Most zadrixes also wear some sort of robes, though it's not unheard of to see a zadrixes wearing something else.

Zadrixes are peaceful and often very friendly, being quick to befriend those around them.

The zadrixes love nothing more than seeing new sights and telling the great tales of their history and gods. They're natural storytellers, often voicing characters and adding flourishes and movement to add emphasis to their tales.

Zadrixes have what they call 'soothsayers', who are master storytellers and often prominent religious figures. Soothsayers claim to have a connection with the zadrixes gods, the Listener, the Speaker, and the Allseer, that allows them to communicate with them. The soothsayer carry out the will of the gods, be it gathering information or spreading the words of the Speaker. Some soothsayers claim to be 'Oracles of the Allseer', who are believed to be able to predict the future. No one is quite sure if they're telling the truth or not, but most zadrixes will completely believe the soothsayer and are quick to argue with those who don't.

To ignore a zadrixes' story could be taken as a personal insult, especially if the zadrixes is a soothsayer or other religious figure.

Most if not all of early zadrixes history has been buried by centuries of folklore, with thousands of different tales and interpretations. generally the most accepted history is that of the splitting of the Whole. Originally, the zadrixes only followed one god, this god has been given many names but is simply referred to as the Whole. It's said that the zadrixes lived peacefully under the watchful eyes of the Whole for a millennia before the Shatter occurred. A being known as the Liar attacked the Whole, breaking the god and plunging the zadrixes into misery.

Lost without the Whole, war and death ravaged zadrixes kind. In this time of darkness, a new guiding light shined. This light came in the form of the first Soothsayer, Thrall. With expertly woven tales and a charismatic smile, Thrall united the zadrixes under the new gods, the Listener, the Speaker, and the Allseer. The priest believed these new gods were the reformed pieces of the Whole, emerging once again to save the zadrixes from the tragedy that had befallen them. United once more, zadrixes kind began an era of new ideas and connections, an enlightenment, a rebirth.

Zako is an arid planet dotted with small lakes, rivers, and zadrixes cities. Most cities are clustered around these lakes and rivers, as the zadrixes use them as both a form of transportation and a water source. A majority of the arable land is covered with paddy fields.

Blessed: A zadrixes born with intricate, bioluminescent markings. The blessed are believed to have been touched by the gods themselves, and are thus closer to the divine than even soothsayers.

Color Changing: Like chameleons, zadrixes are able to change the color of their scales to reflect their mood or to adjust to different temperatures. The "neutral" color of a zadrixes is a plain grey.

• Zadrixes tend to pick at their scales when anxious or aggravated. This can lead to horrible patches of missing scales and other health problems if left untreated.

• Dedicated storytellers and Soothsayers can commonly be seen carrying instruments, puppets, and other items to enhance their storytelling with visuals and sound effects.

• While they're not quite pyromaniacs, most zadrixes seem to have an odd fascination with fire. Due to this, fire is a popular subject matter in many zadrixes tales and is often conveyed with a tone of respect or admiration.