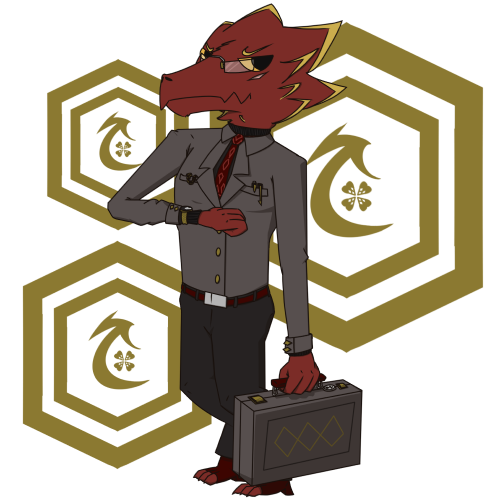 “'Propriety' is in how you carry yourself; it transcends species and class. Those who use their status, high or low, as an excuse to disregard propriety. That is what a 'savage' is. And I do detest savages.” — Coma Checomode

[Calm] Neutral trait
This character tends to be calmer than most and is slightly more likely to be able to calm down faster in tense situations and clear their mind.
[Differently Abled (Tailless)] Neutral trait
This character may have some form of what most call a disability. It doesn't interfere as much with daily life as you'd expect, and they chose not to have a prosthetic (if applicable) for whatever reasons they may choose.
[Auto-Translator] Positive trait
This character can translate what a person is saying even without hearing the language before. Restrictions: This trait is an aftik-only trait.
[Connections] Positive trait
This character has some sort of important connection to someone else. These connections often times owe the character a few favors.
[Polite] Positive trait
This character is very polite. Most character may find them pleasant to talk with and will gain a sanity bonus when interacting with them.
[Bottled Rage] Negative trait
This character will store away their anger or other such emotions whenever they feel them and won't tell others about the anger they're feeling. Because of this, after too much anger has been stored up, they will be prone to burst at even the smallest thing and fly into a fit of rage.
[Intolerant] Negative trait
It doesn't take much for this character's opinion of another to begin souring. When someone does something that violates this character's sense of propriety, whether it be their habit of littering, moronic opinions, or foul mouth, it all adds up to get on their last nerve.
[Ruthless] Negative trait
A more extreme version of [Pragmatic]. Where a pragmatic person would save 100 lives over one loved one, having done the math and weighed the odds, the ruthless person would be willing to sacrifice 100 lives to get rid of one person.
[Clean Freak] Negative trait
This character is obsessed with being clean and will refuse to do dirty jobs. If they do get dirty somehow, they will suffer a sanity loss. This character will also keep their living environment as clean as they're able, and can get frustrated if it's dirtied up.

Coma Checomode is a male aftik with rust-colored feathers and yellow highlights. He has a small scar under his left eye. He also has no tail and makes a point of maintaining a stiffly upright posture as a result. His eyes are big, yet half-lidded, with deep black pupils, and he wears glasses.

He makes a point of always dressing for business, often wearing a dark grey suit buttoned fully over an even darker dress shirt and pants, with accessories in the form of cuff and collar links, a chained pocket fob, and a regular watch; all gold. He carries a suitcase wherever he goes, which has been noted to contain a laptop, a cigarette holder, a gun, sanitary wipes, and a rotary phone of all things.

Coma Checomode doesn't seem to act like the average male aftik - he's not easily startled, he doesn't tend to ramble, he does not "WOOP" if he can help it - and he takes pride in this fact. He's prim, tries to be punctual, and is quite apologetic when he's not, often to an uncomfortable extreme. He tries to honor whatever social cues are being followed by his present company - it pays to show one's potential business partners respect, after all.

He might give the impression of being all-accommodating, to the point of looking submissive to everyone he meets, but while he does succeed at controlling his temper usually, he gets a twitch in his eye when people don't reciprocate that same reverence; slobs, buffoons, and oafs beware. When he does reach the boiling point - often when such issues start piling up in front of him - he suddenly starts shouting, grinding whatever other proceedings that are happening at the time to a halt in order to berate and correct the offending individual, sometimes with some level of physical abuse - such as force-feeding trash they've just littered or stabbing their cheek with the dessert fork they passed up in favor of eating their cake with a combat knife - to "hammer the lesson into their dense skulls," almost always calling them an "uncouth savage" in some form before he's done.

When either the behavior is corrected or the offender is gone and/or unconscious, and Coma manages to calm down from his episode, he tends to become visibly distressed. He then apologizes to the room, finishes up any business he had if any, and excuses himself. One shouldn't let this apologetic behavior give them the wrong idea, though; if someone's opinion of him was permanently soured after he verbally tore them a new one for doing what he considers impolite, the feeling is mutual. He has gone on record to say that he refuses to do business with anyone he deems to be uncivilized.

The first official record of Coma's existence was the testimony of an old station pawn-shop owner who saw a young aftik drag himself away from a shuttle that had recently landed - "likely a stowaway, from how he was dressed." He made a beeline to the counter, leaving a trail of blood, and dropped two things onto it; a bloodied pair of rusty bolt cutters and some sort of bundle wrapped in bloody bandages. "I quit being a savage," he was reported as saying, "so how much would an aftik tail fetch me?"

Within a year, the same aftik registered himself on the intergalactic census as Coma Checomode and started prying into the local slave trade. It's been speculated that he took interest due to it supposedly being the ultimate proof of the superiority of "the civilized" - that savages only have a place in this universe as slaves. He quickly made his name as a go-between in the business, helping to negotiate and finalize shipments of stock.

He has recently expanded his enterprises to start taking on some stock of his own. While he has been known to free those he believes to be carrying themselves the right way, he's also gained a reputation for being unafraid of selling in fellow aftiks while personally running trafficking rackets.

Manifest Destiny: Because of his keen eye for opportunities and openings, Coma Checomode is quoted as saying "Lady luck has no hold on me." As long as he can stay calm enough to be aware of his surroundings and think clearly, it appears he can easily pick up on bad luck coming his way and avoid it.

• When he gets irritated by some action, but not enough to blow up on them, he will often leave a warning memo somewhere the offender will find it, instructing them on what they did and how to correct their behavior.

• People have seen him enter public phone booths, only to open his briefcase and use the rotary phone he carries in it. It is speculated that it's hooked up to a wireless transceiver and that he does this to make himself hard to trace.

• Coma is often seen in the presence of one or more contractors, but while he does make a point of avidly listening to any pitches and arguments they may have, he never signs or agrees to anything, and he will gladly shoo them away if they're making someone he's talking to feel uncomfortable.

-Back to Legendary Menu-
< Classless-7
Cream >