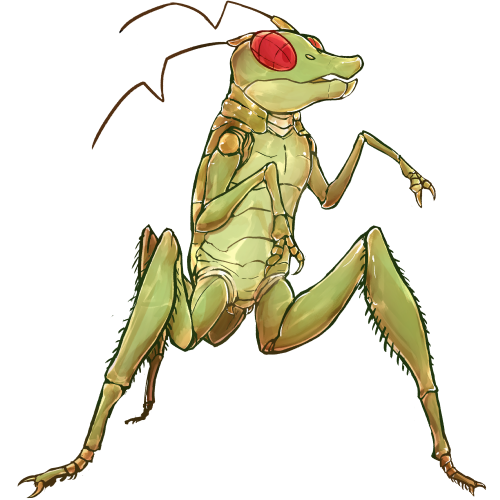 “Today is the first day of the rest of my life!!” — Common tripod saying

Common Jobs: A tripod can quickly learn how to do any job.
Likes: Life, New experiences, Learning
Dislikes: Commitment

Attack Method: Whatever attack pattern it has learned to use

[Calm] Neutral trait
This character tends to be calmer than most and is slightly more likely to be able to calm down faster in tense situations and clear their mind.
[Optimistic] Positive trait
This character doesn't lose morale as fast and can never hit negative morale. No matter what the situation, this character will keep their head up high and may raise the morale of others. The optimistic trait may drain sanity if the character is in a bad situation for a long amount of time.
[Yes-Man] Negative trait
This character finds it hard to refuse orders or requests from others, and is easily persuaded to perform tasks.

A tripod will worship whatever god catches its fancy.

Tripods are a bug-like species. Every tripod has three legs, two antennae, and two spindly arms. Their skin can be any shade of green, and their compound eyes are always a shade of red. They get around by scuttling and hopping.

Tripods only live for one month. Therefore, they tend to be a very carefree species, not worrying too much about anything. Every moment is a significant part of a tripod's life. For example, if you have just one conversation with a tripod, it will treasure that moment dearly and look back on it with fondness. Every item a tripod obtains is a very special item to the tripod, and if the item must be parted with, the tripod with often thank the item for the fond memories it had.

Tripods are very appreciative of the things they have and the places they go and the people they meet, and will often thank people who talk to or interact with them at all. They are a very cheery species, loving and appreciating every aspect of their life. They often say "Thanks for the memories!" at the end of conversations or to objects they are parting with, or to places they are leaving. Tripods view any person they meet and any item they obtain as special. Even so, tripods do not get very attached, as they understand and fully accept that all good things must come to an end. Therefore, if they must say goodbye to a person or item, they don't sweat it too much.

A tripod's lifespan is as follows: the moment they hatch they go into a period of hyper [Newborn Learning], where information is taken in at a rapid rate. It is on the hatching day that their parent excitedly tells them all about the cool and special things that have happened to them in their life. This facilitates a tripod's understanding of language, their lifespan, and their excitement to live their life. On the second day, the children are old enough to walk and talk. This is when their parent takes their kids with them, wherever they are going, and shows them around. This facilitates a tripod's understanding of what life is like, what society is like, and how to commune with others. On this day, the children will also ask any questions they have, and decide where they want to go from here. On the third day of its life, a tripod has fully matured. This is the day they say goodbye to the parent. The tripod then lives for about one month. Near the end of that time, an adult tripod will start to feel less energy than usual. This signals that this is its last day as it will die from old age tomorrow. The tripod uses this day to say goodbye and thank you to everyone for the memories.

Tripods are generally upbeat and full of energy, and are often hopping with excitement. Tripods are excited to be alive, and to live their life to the fullest to get as much as they can out of their short lifespan. Tripods find everything very fascinating, and whenever they learn something new, no matter what it is, they find it very interesting and are very happy to have found out about a new thing! They have a deep appreciation for all the different kinds of things they experience in their lifetime, which is why their favorite thing is to experience something new. As a result, tripods are usually up for anything, are very flexible and easygoing, and tend to go with the flow.

Tripods do not fear death as much as other species do, due to their already short lifespan. While they will try to stay alive to some degree, if one finds that it is about to die, it quickly accepts its fate. Before dying a tripod will usually say, "Thanks for the memories!", but to the universe at large this time.

Tripods are very chill about everything and it is very hard to get one actually angry. When bad things happen to them, tripods go straight to the acceptance stage, acknowledging that this is what life is like sometimes, and that they're happy to live it no matter what it is. If they think something is wrong they will make their opinion known, but their immense curiosity to experience all aspects of life often leads them to not intervene too much on things, "just to see what will happen". Tripods are unstubborn to a fault in this way; while it is good that they are very open-minded, it means that they will usually never stick to one opinion or defend their viewpoints even if they do care about them, and they also won't stand up for themselves, no matter what happens to them.

A tripod will always look on the bright side of things even in negative situations. If they are forced into unfavorable situations or hostile conditions, they will look on the bright side and see what this situation does teach them and what they can glean from it. For example, if a tripod is forced to do the exact same thing every day, it will learn to appreciate the situation/circumstance, taking pride in whatever it does do, and reflect on what this sort of experience teaches it about life. It is very hard to make a tripod depressed as they will always look on the positive. Even if you lock one in a room with absolutely nothing to do, it will be content with just sitting there and thinking about life and what it has learned.

When asked if they want to do something, they will almost always say yes, as their absolute favorite thing is to experience new things. They will do this even if it doesn't seem like a smart or sensible thing to do, as they live to make new experiences and do not fear death. Due to this, it is very hard for a tripod to commit to something for an extended period of time, and they are easily swayed from whatever they are doing if you offer it something new to do.

Even after the newborn learning phase of their childhood, tripods are very fast learners and can pick up skills very quickly. Even if one is not specifically taught something, they can learn skills from people around them just from watching people do things, or being around them when they do it. If a tripod hangs around one person a lot, you may notice it has all the same skills and does tasks in the same way, and may even pick up mannerisms from people, due to them learning how to do those things just by hanging around this person.

Tripods are quick thinkers who have been shown to have an amazing capability of performing tasks well, and they are able to get the hang of doing things very quickly. Even if they have never done something before, they are usually able to do it very well on their first try, just from the information it has subconsciously picked up. For example, if a tripod is being attacked, but has never learned how to fight, it will try to use the kinds of fighting skills it has watched others use, and is usually able to pull it off successfully. While this would make them experts in any field they choose to go in, most tripods don't specialize or pursue any career, as they want to use their life to experience as many different things as they can.

If a tripod ever comes across another tripod, they will be naturally inclined to introduce themselves and soon mate. This is because tripods understand that their life is short so they should mate whenever they get the opportunity. This mutual understanding is shared among tripods, so tripods will always mate shortly after they meet. When a tripods mates, they can choose which one is to lay the eggs. A tripod will lay 1-3 eggs, and only the tripod who laid them will raise them, with the other tripod usually leaving soon after to go experience even more new things. There is a mutual understanding of this among tripods, and no one is upset about this.

Tripods do not settle down and find homes to live in; they are always traveling in order to meet new people and experience as many things as they can. Due to this, tripods do not have a homeplanet. Tripods are also eager to join ship crews for this reason.

Tripods do not try to keep track of past events as they prefer to live in the moment and focus on the present. Due to this, no one bothered to record any tripod history or even what their homeplanet was, so this information has been lost to the ages.

• Tripods do not have a culture, as they are always traveling and never settle down in one area. Due to this, it will often pick up on the customs of species around it and simply adapt to those.

• Because tripods do not have a culture, they have no concept of gender at all. When a tripod is asked its gender, it will ask what gender is, and then simply make a choice based on what was explained to them. Therefore, a tripod's gender could be anything, depending on what species explains it to them. 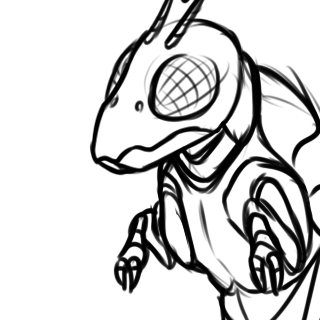 -Back to Species Menu-
< Tourist
Tweep >