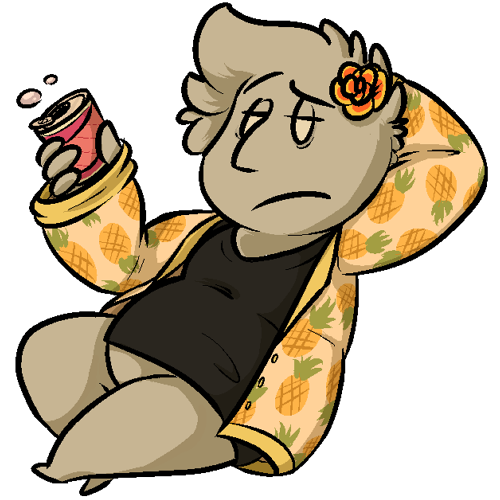 “You and me both señorita, but hey, ever since they forgot me here all I've been doing all day is living around a resort and making leis, what else could I ever want in life?” — A typical tourist

Common Jobs: Anything they find, Temporary work
Likes: Touring, Finding new things, Writing, Seeing exotic places, Fancy cockerels
Dislikes: Being stuck in one place for a long amount of time, Forgetting supplies, Meeting tourists with the same clothes as them

Attack Method: Friendly greetings. Be completely oblivious to any attacks. Take neat pictures of the event.

Tourist honor any god they feel is "Neat" and as such it isn't rare to see tourists change gods as much as they change their shirts.

Vaguely humanoid. They sometimes appear to be made out of smoke, but are really solid beings with smoke oddly rising off of them. The smoke is usually only seen when they are excited, sad, worried or other major emotions. Most of them stand at 3 feet tall. A tourist always decorates themselves with goods they brought from places they've visited to make them stand out from other tourists. They have an odd affection for flora-printed shirts.

Tourists are the reason the term "a tourist" became a widely used term. They were the first species picked up by notails, and they started to spread fast.

Tourist love to hop around and see all the sights in space. While they aren't bad crew members, and are in fact highly friendly and willing to work, they are space hoppers and will jump from crew to crew. Due to their space hopping some species like the notails, athonae and oblein will pick up tourists to use them to map out areas. Some tourists are even secretly traded between mappers.

Tourists do not have genders or pronouns naturally but do not mind others referring to them with him/her/ect. They like to go with the flow.

Tourist don't seem older or younger. In fact, without all the items that they pick up and wear, you wouldn't be able to tell the difference between two tourists.

Tourists never seem to get sick, but can be murdered. If murdered a tourist body will slowly become gas and fade away over the course of a few days. Tourists will suddenly die after they supposedly find "the spot they've been looking for their whole life" or "The best thing ever". If they die like this their body quickly fades away after a few minutes.

Tourist history is nearly non existent. When asking a tourist what their homeplanet and history are they commonly say it is boring, or that it's not worth talking about because it's nowhere near as exciting as the history of the place they're about to visit. What little is known about the history of the tourist comes from looking at their home planet. 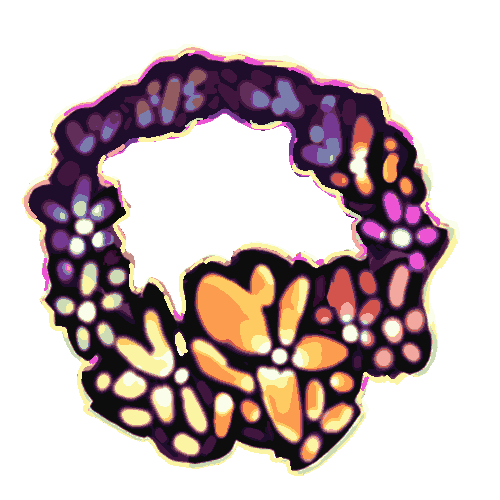 Art by Lammar
Due to the history of the notail and tourist relationships, the flowery necklace has become associated with death.

Tourists seem to begin life after coming out of large gas leaking holes in the planet. No one but tourists are sure what is in those holes as going down without dying somehow has yet to be accomplished and no tourist seems to give info about what goes down there. All that is known is that every one to three years a tourist returns to their "home hole" and a week later they come out with nothing but items that have deep meaning to them and their most required items such as money. It appears tourists give over other trinkets to something down there.

When the notails first went off into space the first species they met were the tourists. The moment the notails opened the doors to their space ship tourists walked on to it with suitcases of essentials as if it were a bus. The notails just shrugged at this odd behavior and took them back to their home planet as it saved them the time attempting to catch tourists. After tourists were deemed perfectly safe and taught how to speak limlish, the language notails speak, the tourists were brought with notails to many of their missions and spread across the universe.

While tourists haven't done anything too important, the tourists are the species that catalog new items, planets, species, and update the Cosmosdex with this info.

Tourists will sometimes over exaggerate info in the Cosmosdex.

The tallrist: While not a true subspecies the tallrist is really just a tourist that instead of being three feet tall is in the lower five feet range in height. The tallrist are extremely rare, only appearing from two of the hundreds of other holes on the planet.

Due to all tallrists coming from the same two holes they all smell like butterscotch or pine trees, no exceptions. Other than their tallness and smell there is nothing that makes a tallrist different from a normal tourist. There are tales that tallrists are a higher class of tourists and have more money, but this is a lie.

• The gases that tourists emit can be deadly if in a small enclosed space. If one were in a closet with a tourist when they die or get extremely excited that person could die from the fumes. The smell of the fumes depend on tourist to tourist. With some fumes smelling like nothing, some like burning charcoal, and some even smelling like caramel. It is unknown what makes tourist fumes smell differently but it is known that uncommonly the tourist will gain a new smell after coming back from their home planet.

• Tourists enjoy roaming around with little care in the world, as such if one wishes to keep one on their crew it's important to always have a person follow them around.

• Many people remark how odd it is that they have never spotted a child tourist before. This is because tourists do not leave their home hole until they are adults. The only way to see a child tourist is to create one in a lab. Tourists do not seem to be naturally able to have children, bringing up the question of where new tourists come from. Even some tourists have no idea where children come from, while other tourists laugh and refuse to tell. 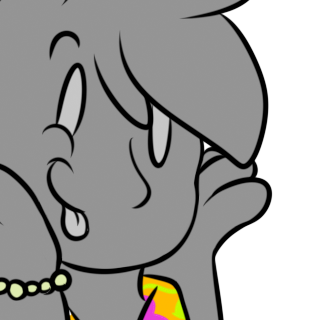 -Back to Species Menu-
< Toreka
Tripod >