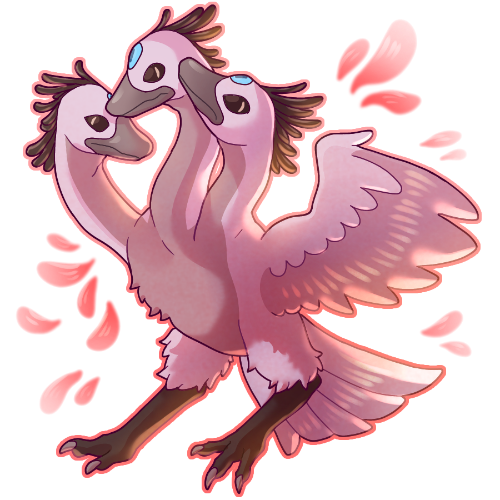 “The locals said I should fear the sneese. Wonder why germs scare them so much.” — An unfortunate tourist moments before disaster

Attack Method: Sneese attack using their necks to restrain or or strangle their opponents. Their wings give hard smacks, and fangs are only used for the killing blow.

[Drug-resistant] Neutral trait
This character's body is able to filter substances extremely well. All substances, recreational, medicinal, and lethal, will need to be administered in a larger quantity for them to take any effect. There may be a few exceptions.
[Adaptive] Positive trait
This character is more able to survive in an unfavorable environment, given time. This character is able to handle radical changes without folding under pressure.
[Thrillseeker] Negative trait
This character actively attempts to do dangerous stunts. When they see a fire, they run into it to try and save people, even though they are totally untrained. They weighed the pros and cons, and are FULLY aware of the danger they're putting themselves through. This puts them in the line of danger far more often.

Sneeses are an avian species with quite a few reptilian features such as fangs, scaled under necks and bellies, and dry sandpaper-like skin. Alongside this they have three heads with three eyes upon each, as well as long serpent-like necks. While sneeses have wings and tail feathers they're much too heavy to fly. The most they can manage is a short glide.

The three heads of a sneese are nearly identical, and all have three eyes each: Two located on the sides of their face, large and almond shaped with sharp thin pupils, and a third differently colored one above their beak. Said third eye tends to have an especially distinct color compared to the rest of the sneese's palette.

Most sneese are born with a head crest, a group of stiff feathers that they can puff out. Their beaks are similar to that of other avians, except that they contain little holes near the end that serve as heat sensors for tracking prey. Inside their beaks are two long fangs as well as ridged edges that serve as pseudo-teeth, tailor-made for ripping into flesh. A sneese's neck makes up a good part of their height, and it is both long and flexible. It is very similar to an elephant's trunk in that it's essentially a pseudo-limb. Sneese utilize their necks in a variety of ways, including but not limited to grabbing objects, grabbing people, wrestling people, and strangling people.

Sneese wings are about as large as their necks are long, sprouting out from their shoulder bones and being vast enough to hide part of their body when not spread out. The feathers aren't evenly spread out, with the ones on the tips of the wings being much longer and plentiful. Their feathers are often duller soft colors. Brighter colors are uncommon and considered bad luck. While sneese cannot fly, their wings are still immensely useful as a weapon. Adding to the sneese's already vast array of attack methods, they can knock a person out with a single mighty wing slap. Scales on a sneese are only found on their more vulnerable parts, such as under their necks. The scales of a sneese are smooth and highly durable, and generally similar in color to their feathers. Patches of feathers and scales are separated by small strips of uncovered skin, a chink in their armor so to speak. The long legs of a sneese are sandpapery in texture and usually dark in color, and end in claws with sharp talons.

Sneese have no form of sexual dimorphism, nor a system of gendering. Every sneese is able to sire or lay eggs.

The features of a sneese call back to their reptilian ancestors, and for good reason. Their whole civilization remains in a primitive mindset, despite the whole galaxy opening up to them. Sneese are not very sociable outside of their own species and quite wary of most modern technologies. Space travel is the one technology they have embraced, as it fits quite handily to the nomadic lifestyle they religiously follow. Sneese loathe to stay in one place for long, rejecting an easy settled life in favor of finding new challenges to test their survival skills. For the sneese, strength is everything. Those that cannot handle their way of living are considered weak in the sneeses' eyes, and thus undeserving of any help or pity.

Sneese mindsets, hardened by survival on their homeplanet, tend to be set in stone. The sneese frown upon change, as nothing but their current style of life has kept them satisfied and living. Sneese value strength, but also food. Many of their customs revolve around the two and thus they refuse to partake in actions or events that lack one or the other. Sneese also have their survival instincts honed to the max, making a life of peace difficult for them to wrap their minds around.

Sneese are highly specialized in survival and combat, and thus generally struggle to dabble in more intellectual endeavors. They also aren't exactly the most charming species, and forming a true bond with one is almost always a hopeless endeavor unless the person is a sneese. Most sneese are rather bluntly honest and hate sugarcoating things. One won't survive in the wild if they don't face the truth. They're are often out of tune with most social trends, such as sayings or jokes But the sneese love pranks, although it takes them by surprise. It's an enjoyable interruption of everyday life.

Sneese don't take kindly to modern trends or manners, tending to be brutish and insensitive in the eyes of the wider universe. This suits most sneese just fine however, for in their eyes their primitive culture is much more better than whatever other beings are doing. Sacrifices to higher beings and violent tests of strength against one another are perfectly fine for most sneese. Sneese who wander away from their homeplanet tend to integrate with whatever society they meet, though still keep certain customs which are important to them.

While sneese are bitter personality wise, they have built a colorful culture. The practice customs of their own, no matter where they go. These customs include; sacrifices to the higher beings of the universe, their beliefs of having to constantly test their strength. These traditions of theirs are more or less subtle within wandering sneese. It's their form of respecting other cultures by not forcefully mingling them.

While highly uncharacteristic of them, anything relating to death is something they tread lightly upon. Life is sacred, as one could lose it at any time. They honor those worthy of it, but do not spit upon those who deserve it. It isn't worth upsetting the spirits of the dead. Sneese are practical beings. Preferring something that lasts rather something that's worth more. This goes for their values as well, anything they can't achieve themselves isn't worth it.

Rarely sentimental, they mostly keep to themselves. The only thing most sneese seem comfortable talking about is their battle scars, which many of them have. Due to their physical abilities they make great guards. Emotions are something not fit for their battle hardened species but they do deal with them when the time arises, if poorly.

Besides their bitter personalities, the biggest thing one will notice is the nomadic lifestyle sneese carry. Restless by nature, sitting still will never be for them. Danger is always on the prowl, so they'll move away from it. Sneese prefer to be ahead of their enemies rather than behind them. Even within calmer areas, a sneese cannot rest. There's always something new to come across, something new to challenge. Life cannot be a simple one place existence for them. They simply love the feeling of adrenaline and the challenges life presents.

The start of the tale of the sneese dates back to the earliest stages of their planet, Homoakata. The great extinction that took the world by surprise and tore down any root of familiarity. Giant craters planted themselves in place where ancient civilizations laid, and others rose to the surface. Plants shriveled and died, fauna struggled and ran. Only the fittest survived and mutated to survive the harsher conditions set by this event. But what started it all? Many sneese believe it to be caused by a legendary nine headed sneese, Neiv.

Neiv brought upon the destruction to set upon a new era, an era where the sneese would rule. They would be the apex predator, the dominant species. Ancient sneese were rather different from the common sneese of this day and the fossil studies show. The great extinction and the rebuilding of Homoakata caused many drastic mutations to occur. Some speculate the radiation found on certain parts of Homoakata to be the cause of it. Due to this sneese shared a common ancestor with many other avian species that had walked the planet, though very few lived to this modern day. Many species could be considering sister species even with the drastic physical differences. Only the fittest survive, and the sneese are a key example of that.

The rest of the legends of the sneese vary flock to flock. None of their history ever recorded in stone, and word always ends up being twisted. The only history being the remains of what their world used to be before the great extinction took place and wiped the planet of much of its species. The only consistency being the tale of Neiv. Which even then, only the name and what they did is widely known. In some stories, Neiv was a tyrant, in others a god. The sneese folklore always fluctuating with time. The only big moment of modern history being their discovery. The sneese are still a rather recent discovery though. There isn't much to note about them in the universe yet.

Hydras: This subspecies of sneese is known for the fact they have four heads instead of three. The two middle heads are merged neck down until it reaches the head. These sneeses also are covered in way more scales, their faces and even their backs have some. Only the crown remaining covered in feathers. Hydras come in brighter colors than the common sneese do.

Sweens: Sweens are a larger variation of the sneese and generally more elegant. Unlike the common sneese, they're more social, but they bite just as hard, if not harder. Sween's teeth and fangs are sharper than the common variety. Their diets have larger quantities of meat. Sweens come in diluted shades and usually lack any form of patterns. They also lack the third eye.

• The sneese's third eye is believed to be hypnotic. There hasn't been any proof towards this statement yet, the usage of the third eye remains a mystery.

• Sneeses don't have three brains. They actually only have one and it's located closer to the stomach than it is to any of the heads, thus allowing the sneese to control its heads with mastered precision.

• Sneese tend to name their children after word combinations, but in modern times there's been too many Windcatchers to count that now they're playing off sounds to make it stand out.

-Back to Species Menu-
< Smeeper
Soledade >