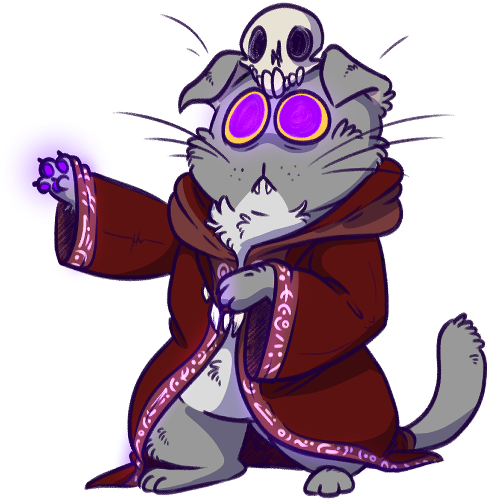 “Fear us! Hear our words and tremble under our will for we are the destined kings of- What are you-!? GET YOUR HANDS OFF OF ME I AM NOT SOME MEWLING PET I AM WRATH!” — Valka the grand lich lord

Attack Method: Attempt to slay them by channeling only the darkest of magic, failing that claws will do in a pinch.

[Cultist] Neutral trait
This character believes in the strange, the arcane, the other. They are naturally drawn to fringe cults and strange beliefs, and may already be a member of several of these groups.
[Cute] Positive trait
Aww, well aren't you just precious! People are easily endeared to this character with their puppy-like look. Their presence is often additionally capable of increasing morale for the crew, assuming they like sweet things.
[Manipulative] Negative trait
This character will, if given the chance, take advantage of a character for their own gain. This character is likely to tell others to do things that help themselves but not the person being told to do the action. Manipulative highly lowers the morale and may lower the sanity of a character if it happens too much.

The kitsche worship a number of gods both limbo and otherwise. Many of the nontraditional gods worshipped by the kitsche are either ancient kitsche legends or fragmented tales of a long extinct species of multi legged creatures of untold power.

Gods: The Radical, The Neo, The Mirage, An assortment of nontraditional gods including Malachus the Revived

The kitsche are a small race of bipedal feline humanoids that cover themselves in medieval styled clothing accented with various bones of creatures they have slain. Due to their height the kitsche are often overlooked by other species and confused for normal cats or other feline fauna. The kitsche appear most similarly to the Scottish fold cat breed and all carry the same genetic trait of folded over ears, though it is not uncommon to see "Mixed breed" kitsche that appear more akin to other cat breeds like the sphinx or tweepian blue.

The garb of a kitsche is often colored dependent on their ranking with less powerful occultists wearing more drab colored clothing and higher class occultists wearing brighter and more vivid colors and patterns. The main exception to this is in the highest class of "necromancer" that wear mostly black garb accented with lighter color patterns of their own making.

Each kitsche also always wears a small pendant of some form somewhere on their body which they will protect at all costs. The kitsche claim that these pendants are not only valuable but act as a conduit for their power and a connection to the spirit of the ancient god Malachus that grants them their power.

The kitsche, while absolutely adorable, are not the friendliest creatures in the universe. The kitsche have a sort of "Napoleon Complex" due in no small part to their diminutive stature as well as the fact that the other civilized races of the universe seem to be unable to take them and their demands seriously.

For the most part the kitsche are unhappy with their treatment as an adorable and nonthreatening race, they believe themselves to be the mightiest creatures in the universe and demand the respect that comes with such a claim.

It is not at all uncommon for a kitsche to claim dominance over a town or city only to have the rulers of said town or city "give in" to their claim and act as though they have slain or conquered them. Due to this the actual power of a kitsche is unknown as the majority of conflicts have been resolved through clever acting and "surrendering."

According to the ancient texts of kitsche lich lord Salazar the kitsche were not always the mighty conduits of necromantic power that they claim to be today. Rather, in an ancient time the kitsche were simple folk incapable of thinking beyond their own continent let alone their own planet, that is until the day of the "great reawakening" wherein a number of kitsche suddenly changed from simple farm folk to bearers of the great power of the mighty ancient god of multiple legs: Malachus the Revived.

From that day forward the word of Malachus was spread far and wide through the kitsche, the tales and scripture of this god told the kitsche of the "Prime Route": a path toward incredible power and domination, the power to control not only the forces of the world around them but to control all beings that stood in their way. The word of Malachus spread far and wide and unified the kitsche to set their sights on their new goal: the universe itself.

Though it took many years and generations of kitsche to reach outward, they nonetheless succeeded on their journey into the universal civilization thanks in part to a boon given to them from their god: a ship from above that crashed on their planet that read out a word of great power... "Erebus".

With this boon to their progress the kitsche took their first steps out onto the universal stage and laid claim to all that existed, their journey would surely come to its climax with their claim to the throne of reality assured, none could possibly stand against them! They awaited with bated breath for a response from the universal civilization to bow at their feet, to pledge themselves to the rule of the kitsche...but the universe responded in a way they hadn't expected, a resounding cry of voices calling out to the kitsche and calling them "Adorable!" "So cuteee!" condescending voices calling out at them and reducing the kitsche to their simple appearance. Thus began the grudge of the kitsche toward all races and the silent oath to lay claim to all reality.

The kitsche homeworld is known as Planes-Umbra and is a surprisingly pleasant planet for its name. The kitsche claim that their homeworld is "The darkest abyss imaginable, second only to the great darkness that awaits all life" in reality however the planet is a very lush and pleasant, if a bit foggy, planet to live on. The claims of the kitsche are not entirely untrue however as there are a number of suspiciously dark and bleak looking swamps and forests on the planet, but otherwise it is mostly quite normal.

Potential Necromancy: While no civilized being truly believes the claims of the kitsch knowing the ancient secrets of necromancy the kitsche are well established occultists and often have abilities fitting for such beings.

• Some members of the species are adopted and only figure it out weeks or months down the road. There have been incidents of kitsche making their 'den of ill intent' only to find out that their apartment is a zoo exhibit.

• The kitsche are particularly known to attempt to terrorize avian and insect-like species for their own pleasure.

• It is not uncommon for a kitsche to completely stop what they are doing to stare off into the distance for hours on end. The kitsche claim that this is a trance like state with which they communicate with their ancestors.