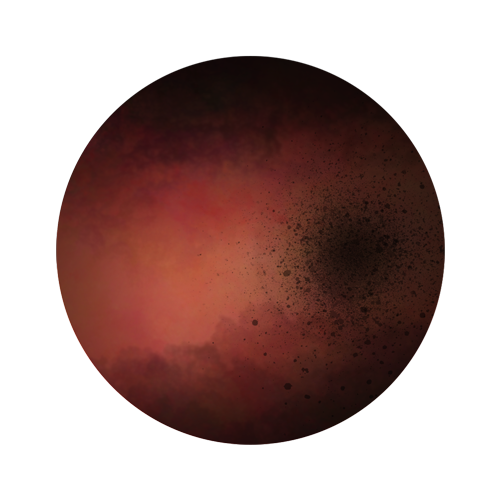 “Scorching deserts and every type of meat in the galaxy. What's not to love?” — Slarym welcoming a group of Tourists to Amkear

Danger Level: Medium
Purpose: Homeworld of the Slarym, and once a wildlife preserve

Amkear is a world dominated by large deserts in what were once lush forests, killed off due to this sudden heatwave when the planet's star turned into a Red Giant. Large Slarym cities are scattered throughout the planet's surface, providing many places for a ship to land and resupply. These cities are usually surrounded by large "dead patches," where almost no life is found, located where biological weapons struck during the Gastric War. There are still a few forests unaffected by the head and after effects of the Gastric War, located primarily near the poles of the planet. These forests are designated as wildlife preserves, where members of many species are relocated to when their native planets become inhospitable.

Most of the history of Amkear was lost with the rest of slarym history during the Gastric War. However, large areas of it were struck by biological weapons, rendering areas of the planet completely devoid of life. More recently, the star the planet orbits has neared the end of its life, and has turned into a Red Giant, raising temperatures on the planet drastically and killing most of the plant life on it.

Slal Desert: The Slal Desert, located right on the equator of Amkear, is incredibly hot. It is mostly uninhabited, and towering, lifeless trees cover most of the desert. It was almost completely untouched by the Gastric War, as none of the warring factions bothered to claim the forests that now makes up the desert. A few research stations are located in this desert, as it is one of the best places to monitor the planet's sun, due to its position on the equator.

Polym Forests: The Polym Forests are located on the poles of the planet, and are some of the only forests left on the planet. They are all designated as wildlife preserves for animals who's natives planets are rendered inhabitable, though the slarym government does not enforce this and many Slayrm poachers travel here to hunt exotic animals without consequence.

Slyt: Slyt is the largest city on Akmear, and is located just outside of the Polym. Ironically, it was the smallest city on the planet before its star became a red giant, when thousands migrated to the city because of its suddenly temperate temperature. Travelers can find many places to resupply and many tourist attractions call the city home. It was untouched by the Gastric War even though the town had taken a side in the war, because it had such little strategic value.

Dead Zones: This planet is dotted with impact sites of biological weapons that are completely devoid of life.

• Despite mentions of a "Gastric War" there are no solid records on such a thing happening.