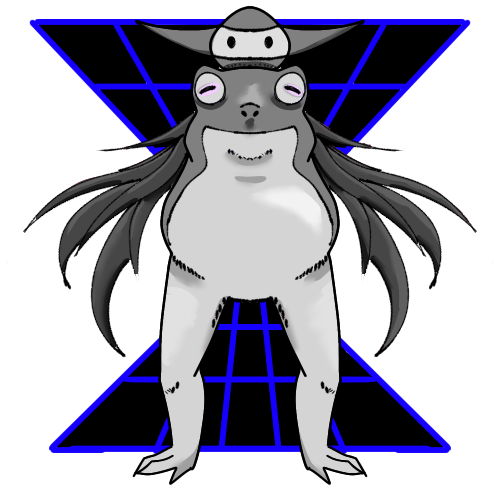 “We want to be the best. To master a skill like no one else ever has- to preform feats never before even thought of in sapient life- That's what makes life worth living. You could make one of us push a giant ass rock up a hill only to have it fall back down again, and so long as that dude or dudette is the fucking best at pushing the biggest rocks, we're happy.” — Baby Ultimate Delusion (BUD)

[Competitive] Neutral trait
This character tends to be up for healthy challenges. If this character sees a co-worker or someone they see as a rival working harder than they are they may work even harder to compete with this person even if this person has no idea what they are doing or even if they exist.
[Dedicated] Positive trait
This character is commonly hard-working and is unlikely to fail most of their tasks. This character is also careful with their work and makes less mistakes than most.
[Thrillseeker] Negative trait
This character actively attempts to do dangerous stunts. When they see a fire, they run into it to try and save people, even though they are totally untrained. They weighed the pros and cons, and are FULLY aware of the danger they're putting themselves through. This puts them in the line of danger far more often.

While troads do not typically worship any god in particular, they do have an elaborate web of myths and superstitions around appeasing luck personified as the god RNG.

Troads are a species of bipedal amphibians with thick plastic-like skin that generally come in varying shades of dull greys. Males of the species generally have longer, thinner bodies, while females will be shorter and stockier. Troads are known for their deceptive forms; A boxy torso standing on long legs that end in flippers, with a pair of arms that end in numerous digits and a large head flanked by two large fins, but this is deceiving. While they have legs and a torso comparable to that of other bipedal species, their arms are actually a variable amount of long, thin tendrils that extend out from their "shoulders". These tendrils are individually weak but have extraordinary manual dexterity that allows them to finely manipulate small objects, and are capable of bundling together to act as stronger singular limbs.

Additionally, their "head" is not actually their head at all. Their brain is situated inside the torso, alongside their eyes, located on each "shoulder blade", and mouth , which is located just below the neckline, typically just a thin slit until their mouths open to reveal their beak, containing numerous razor-sharp teeth. The 'head' is instead a decoy; both a method of confusing predators and luring prey. The head and fins are covered in a thinner layer of their plastic-like skin, broken up into countless smaller scales that shine in a variety of colors when exposed to light. The troads are able to manipulate the color and direction of these scales, able to display a large variety of different patterns and shine light to certain areas like a mirror. In the modern-day, this is typically used as a method of self-expression, and troads will typically display false faces to better blend in with other species.

Above and beyond everything else, troads are known mainly for one thing; Their incredibly competitive personalities. To the troads, everything is a skill to be mastered or a game to beat, to the point that many troads will dedicate their entire lives to a single specialization; While this is sterotypically things such as sports or games, many troads focus on practical skills such as cooking, construction, or programming, approaching these skill sets with the same dedication and passion they would bring anything else. For a troad, to be the undisputed master of their chosen profession is their dream. This often leads to them challenging each other to various forms of duels, either to settle differences, prove the better troad, or simply as a form of recreation.

This competitiveness has caused their society to form in a unique way, based around what is called the score system. The score system is a combination of special implanted devices and a complex algorithm that records and applies a value to every action a troad does, from something as small as picking up litter to actions as large as constructing a skyscraper. The more difficult and impressive an action one preforms, the higher the Score rewarded. Score acts as both a type of currency and a way of life for the troads; every aspect of a troad's life is determined by how high of a score they have, to the point that troads will commonly believe that those lower on the scoreboard than them are simply lesser beings.

A troad's score can never be reduced, excepting for special cases such as punishment for crimes. This makes it unique as a currency; should a troad wish to purchase something, they simply need to meet the score requirements placed upon said item, and then the troad can acquire as much of it as is available to them. If they do not meet the required score, then their only way of acquiring said item is having it be gifted to them by a troad with a higher score, or to create it themselves.

A common saying is that troads require competition the same way they need to eat and breath, and there is some partial truth to this; from the very beginnings of their species, troads have been highly hierarchical, competing with each other and other local species to survive in the harsh conditions of their home planet. The early predecessors of troads were cephalopod; While most species stayed within the deeper, darker ocean waters to avoid the harsh sunlight of the surface, early troads were forced to live on the shores by predation, evolving their thick skin as protection from both predators and the sun.

Initially, life was difficult for these early troads, the only readily available food source being various crustaceans and shelled mollusks that were difficult to process into an edible form. It's unknown exactly when the troads developed their signature 'screens', but it's generally regarded to be the point where the first true troads emerged. Beginning simply as an unusually reflective patch of skin, light reflecting off this skin would attract the once viscous creatures of the deep towards the shores; these creatures, unused to the conditions nearer the surface, were blinded and helpless to resist any attacks from the troads, providing them with a new food source. This new influx of food caused their population to explode, the species growing larger, more complex, and more intelligent as time went on.

As early troads formed and began to create a society, the population began to outgrow the shores of what little land existed on their planet. The early troad society was highly tribal, tightly knit clans competing for territory along their shores and rivers. However, direct combat was incredibly inefficient, the troads thick skin making damaging them with primitive weapons difficult. Troads would thus turn to competition once again to settle their differences, the best troads from each clan competing against each other to decide who had the right to land and resources. This trend would continue throughout the troads' development, competition being used not only to decide leadership positions and important decisions, but also within personal matters, any and all disagreements being decided with different competitions.

With the development of sustainable farming practices, troads began to expand all across the land available to them, developing new trades and skills as they had to focus less on immediate survival. While their society and culture changed over time, by far the largest change to their way of life is with the advent of their industrial revolution. With increasing mechanization easing the burden of labor on the troads, many began to focus more and more on leisure activities and hobbies, or even completely forgoing laboring.

An early form of the score system was developed during this point, troads beginning to provide goods and services to each other in exchange only for demonstrations of skill. With the invention of computer systems, The score system was formalized after several decades of society wide debate, experimentation, and competition, and continued to be tweaked and updated over the next several hundred years.

With their introduction to the galactic community, troads have entered a 'golden age', with new games, sports, and skills from many other cultures being eagerly adopted by the troads. Many have decided to leave their home planet to explore other cultures, and to gain and potentially master new skills.

Shinies: Rarely, troads will be born with a mutation that causes their thick plastic skin to become transparent, and even more rarely in bright colors. This exposes the muscles of the troad in question, allowing their inner workings to be seen by anyone. While an uncomfortable sight to many, troads themselves view the shinies with reverence, giving shinies a greater status in their society than their score would usually allow. However, a major downside of this is that shinies are incredibly sensitive to light, particularly the harsh sunlight of their home planet, requiring special protection to ensure they aren't cooked alive in their own skin.

Breakers: For the elites of troad society, the best of the best, special individuals capable of extraordinary feats purely by their own prowess, these individuals are allowed to join a special order; The breakers. The top 100 troads within the Score system are rewarded with this status, being gifted with unusual powers in a process that is still poorly understood. These breakers preform elaborate rituals to accomplish impossible feats.

The secrets of these techniques are highly guarded by the breakers in question, to the point that whenever a troad falls below the top 100 mark, their memories of their time as a breaker will be erased. Breakers seem to honor the same god, but they refuse to disclose what god it is. All that is known is that it is not the typical "RNG" god that other troads might bow to.

• Normally, a troad's 'face' is only able to display images in bright, direct light, but in modern times a simple surgery has been developed to install small lights just underneath the reflective scales that allow their face to project images even in dim or dark enviroments. This is commonly known as a 'backlight'.

• The troad with the highest Score is considered the leader of the entire species, given absolute control over all aspects of troad society, except for the Score system. The current leader of the species is a somewhat mysterious individual known only as 'ASS'.

• There are rumors that the Score system is somehow sapient, or controlled by an outside force. While many troads will deny this, none seem to actually know how the Score system operates, except for possibly the Breakers, who refuse to comment.

-Back to Species Menu-
< Tripod
Tweep >