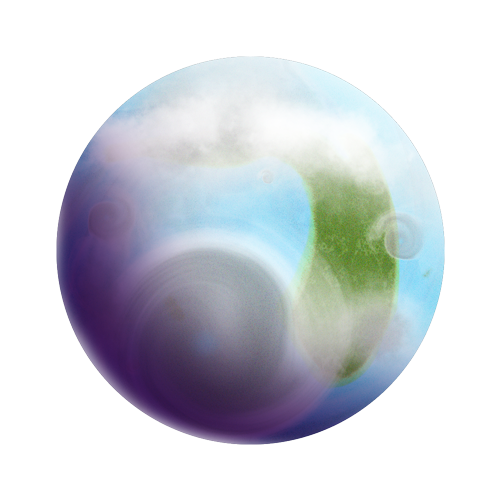 “'It's The Happiest Place In Broadus Cluster'! Is what I'm contractually obligated to say.” — Eternally unknown greeter aftik

Fleedora is a planet with a single peninsular land mass, jutting out into an inhospitable world ocean that rages with hurricanes. What the northern penninsula is connected to is unknown, the northern border seems to dissolve into an impenetrable mist that none who've ventured into have returned from. The rest of its borders are made of shoreline beaches. Numerous swamps filled with various fauna fill those parts of the interior not inhabited by others. Due to groundwater overuse, sinkholes occur randomly around places of habitation about once a week. The entire planet is sun-blasted and humid.

Fleedora was first explored by groups of tourists from nearby Puerto. This resulted in many of them dying, but not in the good way that tourists sometimes die, and the planet being advertised as "a wash, really" and "worth skipping."

The planet was left alone for a while, until something known as "Incident Zoop" happened. The head of an aftik confederation solved overpopulation through mass-deportation. They caused people to be brought to Fleedora and placed nursing homes around the principal swamps. Their name was Greenu. They used renegades. Various breakfast restaurants and stores such as Woffle Haus and Woomart sprung out from bogs. When through with their crime, the rest of the aftiks just kind of forgot about Fleedora, thinking that the elderly aftiks would all die out. They did not. The old, sagging aftiks pluckily adapted to their new environs and bred rapidly, surviving off their ingenuity and a steady diet of young aftiks and were able to remain steady in numbers for decades.

Several generations later, a kindly older aftik named Wendell Woopy wanted to give their grandchildren a nice bit of fun before they were killed for a holiday festival's snacks, and constructed a series of simple amusement contraptions. Other aftiks spontaneously joined in the fun of building contraptions before feasting, resulting in a popular resort destination called Woopy World. Word got out and the popularity of Woopy World soon attracted aftiks from off-planet. Then tourists from Puerto, wondering why people were going to the forlorn trash zone investigated, and Woopy World went down in the guidebooks as a funderful touristry destination for all!

On the heels of tourists came contractors and baphometti seeking to profit off the merchandising opportunities. The practice of sending one's elderly to a planet sounded alluring to a volkronn politician visiting Fleedora for business reasons, and they copied the practice for their own species, establishing several industrial "oldoplexes." Meanwhile, a delegation of celiracks who actually liked the weather of Fleedora decided to colonize several of the southern swamps. A ship full of 200 Jubula strix escaping the law for white collar crime also established itself in the southern swamps, and sometimes can be found doing business there.

Woopy World: A popular theme park in the center of Fleedora where all the kids go to have a good time before they are eaten! "Woop Like Your Imagination Depends on It!" says the popular character Woopy Wallace. Choose from several different parks, each with overpriced accommodation. Ride the gondola. Eat cuisines. Wait in lines. Pay many people for things. Nothing is more fun than a a week at Woopy World! Merchandise purchase mandatory. Some restrictions apply.

Woffle Haus: In the north, take a stop at one of the thousands of breakfast restaurants that has sprung up out of the ground. Surprise waits around every corner as you wait to see if you will receive the item you ordered or something entirely different for inexplicable reasons. Visit the northern barrier and take a gander, but that's it! No one has ever come back from crossing it, and no one knows what it leads to.

Southern Swamps: For those who want a more back-to-nature adventure, tour some rivers and bogs in a boat driven by a backwoods aftik. Meet lots of fauna, flora, and some celiracks. It kind of smells here.

Aftik Space Program: In recent years, a space research center has been established on Fleedora, where many expendable aftiks test new, cheaper spaceflight techniques. The staff on the space coast is always looking for new volunteers to test out experimental ships and equipment. In gratitude (or consolation) for volunteers completing an assignment, one may be compensated with prototypes of cutting-edge technology.

Meme: Meme is the most populous city on Fleedora, located on the southeastern tip of the continent. Meme looks modest on the surface, a mishmash of low-lying, poorly planned ad-hoc structures by various non-tourist species who for one reason or another are separate from the city proper. Beneath the surface, however, is a vast interconnected bunker system that is home to thousands or millions of tourists, as well as other species. The low elevation of the surface and the frequent rains mean that buildings in the underground city often flood. Fleets of sump pumps attempt to keep the city dry, pumping any leaks back out to sea, to the swamps, or to holding ponds.

Meme simultaneously bustles with constant daytime commerce and nightlife recreation at all hours of the day, though some attempt is kept to impose an artificial night/day cycle through a centralized lighting and ambient nature sound effects system (birdsong for day, crickets at night). The mayor-for-life (which may or may not be an honorary position) of Meme's identity is obscured by various contradictory rumors and tall tales, but it's said that they frequently show up at hotspots and events if they're hot enough to mingle among their subjects, preside over festivities, and make declarations.

Fleedora Man: An extended stay in this place may give a character the trait [Fleedora Man].

• In recent years, a space research center has been established on Fleedora, where many expendable aftiks test new, cheaper spaceflight techniques.

• Despite tourists' role in popularizing Woopy World for non-aftiks, most tourists who live on Fleedora can be found in the southern port city of Meme.

• While there are endemic fauna to Fleedora in the northern region, they also occur in the south. For instance: puppybirds, ponybirds, ten-spiders, litter horks and hovering unseemlies occur in all of Fleedora, and occur as smaller versions alongside their corresponding southern Fleedorian fauna counterparts.

With one one endemic fauna, poppyhog, bile can be extracted from their glands to get a substance called poppyhog paste. Poppyhog paste acts as a general relaxant and painkiller. This substance is illegal to buy or sell as a result of its widespread use being a public health epidemic.

• If you catch a sighting of a wispy entity coming from the other side of the wall on the northern border, do not attempt to hold a conversation with it.