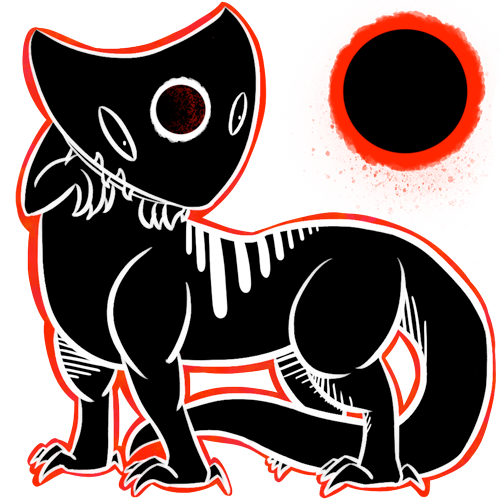 “What are you? You look delicious!” — A slarym encountering a new race

Common Jobs: Hunter, Security, Anything that doesn't give them the opportunity to bite clients.
Likes: Meat, Exploration
Dislikes: Plants

Attack Method: Ambush the opponent using superior senses and try to eat them.

Slarym honor whatever they wish, but enjoy gods who promise food or killing others for food the most.

Slaryms are quadrupedal creatures with powerful, sinewy yet skeletal bodies. They have long legs ending in taloned feet which are three toed, one of which is semi-opposable. They are covered in very short hair in shades of grey, black, purple, and blue.

Slaryms have long, thin, whip-like tails and long thick necks, held vertically from their bodies. Their heads are wide and noseless, with wicked grins running the entire width of their faces filled with a wide variety of teeth. They have three eyes; two almond shaped ones, and a third larger and often more brightly shaped orb in the center. This eye is said to see into a person's soul, but is in fact linked to the slarym's second brain. This is an organ entirely devoted to monitoring the creature's own biology, operating similarly to a heads up display. The slarym can see information on its current health, and an overlay detailing how things in its vicinity, particularly meat, may affect it.

Beside their mouths sprout a pair of arms, with four taloned fingers. They often fold these under their jaws.

Voraciously hungry, slarym have a bad reputation with other species for being hyper-aggressive. In truth, they are no more aggressive than most other carnivorous species. However, they are very curious, especially in regards to flavors and meat. They desire to try as many different types of meat as they can, and this has often led to some rather brutal encounters. Species that a particular slarym has not tasted yet need to attempt their best to avoid the slarym.

Pre-Space Age slarym culture was almost destroyed by a century long war known as The Gastric War. Nations battled for areas where particularly potent prey dwelt and when biological weapons were utilized, tainting the meat, they were almost destroyed. It was during this time that the astronomer and advocate of world peace, Laropabax, finally proved something he had believed for a long time; that there was life on other worlds.

A small manned crew managed to bring back samples of creatures from a neighboring solar system, and with this Laropabax managed to lead the greatest change to his culture for millennia.

"Why fight among ourselves when there is a whole universe out there to eat?" - Laropabax at the nation summit.

Power feed: Some Slarym follow a spiritual path to their feeding, which they believe allows them to absorb the spiritual essence of those they devour. These individuals do indeed seem to demonstrate exotic abilities, reminiscent of those possessed by creatures upon which they have feasted.

• Quelans don't have a big problem with slaryms, as their fleshwarping allows slaryms to taste their meat without giving them serious injuries. This and the slaryms' poor reputation often means that the quelans can hire them for cheap. Slaryms also love to buy and eat leftovers from their bio-engineering projects. 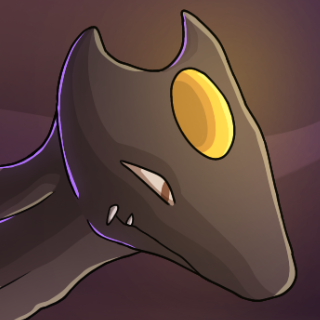