“...we are calling for an immediate lock down, all citizens are to stay indoors until the situation is sorted. If you encounter the creature, do not engage. Do not listen to it's song, or anything said by the creature. Call authorities immediately if you see or within line of sight of the creature, and do not attempt to run or exit the building.” — A report on a recent sighting.

Job: Cryptid
Likes: Toys, soft blankets, drawing, music
Dislikes: Loud people, mean people, notails
Notable contributions: Local cryptid, has a kill record of approximately 40 idividuals. However this is only the number of known victims and may have a much higher number of victims.

[(Amature)Artist] Neutral trait
I drew this for my mommy.
[Curious] Neutral trait
This character has a general thirst for knowledge and tends to ask a lot of questions. They are more likely to investigate anything that seems out of the ordinary.
[Goliath] Positive trait
This character is bigger, stronger, and more durable than their peers by a fairly significant amount, often towering over their smaller kin. Tends to have various size related issues, such as having to duck when going through doorways and having a hard time finding equipment in their size.
[BO] Negative trait
This character's Charisma score is lowered to 1 for all who can smell the repulsive odor wafting from their various, unwashed pores. Gross.
[Cannibal] Negative trait
This character will eat not only characters of their own species but will also eat other sentient beings. The moment that if the character runs out of food they will attempt to eat others nearby. This character may also eat sentient beings even if they have food.
[Sound sensitive] Negative trait
This character is prone to burnout through too much sensory input, be it auditory, tactile, or visual. The reactions may be different, however; shut-downs or aggression in response to overload are common.
[Abomination] Mystery trait
Mommy fixed me and I'm all better now.

Records and eyewitness accounts are often inconsistent in the overall description of the creature that is known as "Baby." However, when all information is compiled, a few nevertheless important traits remain the same. Baby is a large, many-legged abomination that vaguely resembles a metaparxi. Baby's fur is light blue in color, with a lighter blue underbelly.

Many have reported Baby's skin to be covered in dark purplish bruises, small blemishes or large tumor-like growths. They carry themself low to the ground, and is said to stagger and limp when on the move, but may be incredibly fast when needed. Baby is estimated to be somewhere between ten to fifteen feet long, while the amount of legs could be anywhere between eight to twelve legs in total. It's said that Baby has the ability to shed legs, as a lizard would shed their tail under stress. This is supported by severed limbs from an undetermined origin that have been recovered from sites where Baby had previously been sighted.

Baby's face is said to have at least five eyes in total, milked over but believed to be not entirely blind. The creature has no lips whatsoever, and instead their teeth jut from their mouth, creating a jagged and foul maw. Where a nose would be is none at all, leaving just a single gaping hole leading to their nasal cavity. They have two pointed ears, as well as an additional pair of ear holes on the sides of their head. Baby has been reported to be very sensitive to loud noises, possibly due to having two sets of ears. Baby has only one article of clothing; this is an old, pastel yellow bow that is strapped around their neck.

When reviewing all eyewitness claims, experiences with the creature follow similar trends. Roughly 90% of all encounters with Baby start with the witness hearing a young boy's voice. Baby's voice is said to be meek, and sounds as though they are suffering from a cough and/or cold. They may go into a fit of coughing and hacking as they call out to those who wander too close. This voice will beckon the traveler, asking them for their help as if they were injured, sick, or hungry, and will ask them to come further deeper into the forest. Baby tends not to go into conversation or answer too many questions while pleading for help, and will never move from the spot they claim to be in. These encounters are more likely occur if the victim is alone, or separated from a group of people; however, a few attacks have been recorded by a group of campers or hikers whose numbers were below four people.

Details of what happens to a victim gets too close to Baby or when Baby finally comes out of hiding and attacks their prey are largely unclear due to many victims not surviving their encounter with them. It's presumed that Baby will immediately come out of from their hiding spot and proceed to maul the target. An estimated 60% of all victims are partially eaten, with at the very least chunks being bitten out of the victim to test edibility. The remaining 40% are left strewn about.

"It picked him up, real careful like at first, like they were afraid of breaking them," an eyewitness recalls an encounter with the creature, having traveled out into a nearby forest with a friend before hearing the calls for help from a young child.

"You wouldn't think those little front arms would be that strong, buddy was paralyzed. Sure you'd be too if something that big picked you up outta nowhere. It happened so quick, I might have blinked once and then suddenly it was tearing him limb from limb, thrashing him around by its teeth. You ever seen a kid pull apart one of those plastic dolls before? Tossing the arms and legs aside until they finally twist off the head..."

10% of all encounters do not hear a young child's voice, but rather that of an older individual that's said to have a feminine pitch. The voice hums, softly and quietly, and is remembered as being like a lullaby. No witness has yet to claim to seen the source of the humming, and Baby will not attack when there is humming. He will merely appear in the deep forest, turning to glance at the intruder but paying them no mind as they continue on their way.

"We didn't know the weight of what we were doing. Both idiots pretending that no one would ever find out. If any of the management knew that she was having a child, they'd have our heads for sure. And yet it was already too late by the time she found out she had conceived. I wasn't there when it was born, I only knew a few days after when she came crying to me about them. By some miracle it was a healthy, tiny boy that she'd give her entire career and life for if she needed to. Which I assumed she did, even after I had told her multiple times that she couldn't do this. There are fucking consequences. We could've dropped it off in the forest and forgot that any of this ever happened. But I knew from the day she told me that she was leaving that they'd find her eventually, trying to live off scraps and tending to a lost cause.

That's all I know. Please, please if you find her, don't make her hurt for this. She's hurting enough; if she's still alive, that is. I have no idea how she managed to do that to that poor kid, I never gave her anything that could make a monster like that. Please. Please don't hurt her."

The very first sighting of the creature was reported from the outskirts of the manufacturing labs of Tektonne. While patrolling outside the fenced-off areas of the buildings, a G-class notail had heard someone singing softly just within earshot, and only caught a glimpse of something before it took off into the night.

"I thought it might have been some escaped animal, except it didn't breathe right and sounded too coherent to be something not intelligent. <:

Within the month of the first encounter, more evidence of the monster's existence had turned up as several disembodied limbs, exactly five legs, had been discovered in the same area. It was immediately determined the source was that of an abomination, and many Q-class notails had been sent out to locate the creature and destroy it. As of now, none of these notails have successfully captured Baby. In addition, a large majority of these notails have never returned from their search.

• Multiple 'nests' had been discovered by those tracking Baby. These are places where Baby had been hiding in before moving on to a new location. Within these nests, the same or similar objects are found in or around the area, which includes the following:

- Small plush dolls. Most intact, some ripped apart and scattered.

- Papers and crayons. Baby is noted to have a particular interest in drawing, and as many as 50 different drawings have been collected from these nests.

- Limbs that have been shed from Baby's body.

- Backpacks, with their contents often strewn about and rummaged through, presumably in the search for food left within them.

- At least one blanket per nest, one intended for an infant. 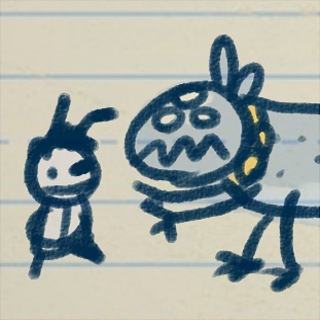 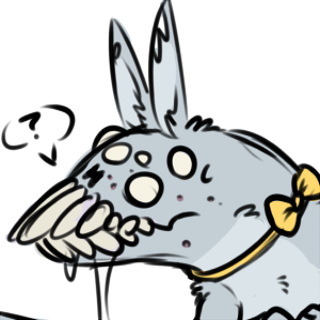 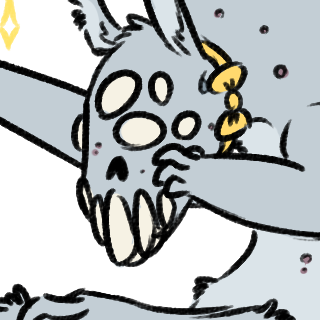 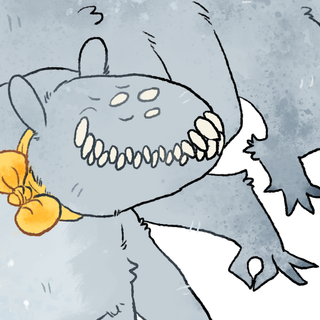