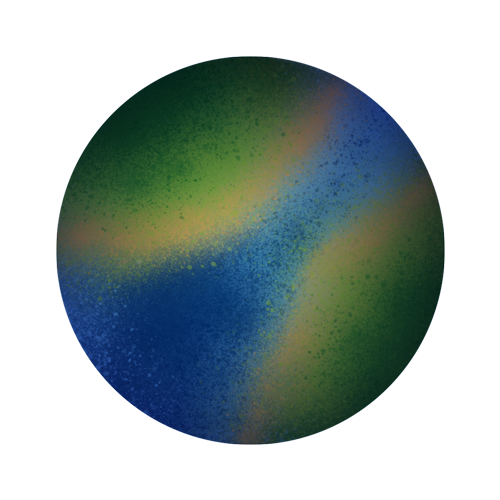 “Well, someone names a planet 'Before', they're just asking for something to go and make it an 'After.'” — E-549 after hearing about Afternia's origin

Aftenia has many dense cities on it. Other than those and roads, there are little to no settlements, only temperate forests, barren deserts, and a few other biomes. The robots work on preserving the landscape and thus many areas remain untouched.

Aftenia is a very old planet, in terms of the age of its components. It has gone through two incarnations, referred to as Before and Alternate by cosmic geologists. Before was originally coalesced from dust. After it had cooled down from its formation, a rogue planet collided with it directly, shattering both of them. These fragments then coalesced again into two planets, Alternate. Their erratic orbits eventually led them close together, where their gravity merged them and formed Aftenia.

Billions of years later, the planet was discovered and then conquered by a group of robots. Today it is a bastion of mechanical races.

CosMac: A city next to a forest, and the ideal home for the forest's environment preservation center. Like most places outside of the cites, entrance into the woodlands is restricted.

Random spot in the desert: A occasional signal out in the desert, where an illegal research dig is being done to learn more of Afternia's prior iterations.

Robot Planet: This planet is home to robots, and only robots. No other races are allowed to live here.

• Formerly the homeworld of the jerce, they were forcibly evicted in lieu of extermination in a moment of mercy and let's-not-establish-ourselves-as-chaotic-murder-robots.

• Attempts to learn more about Aftenia are hindered as they are not allowed to disrupt the carefully maintained environments.

-Back to Planet Menu-
< Adjara
Alinzona >