“I am ready and willing to ride a giant alligator in to battle if you were wondering who would take the helm.” — Eris on her plan to fight crime.

Likes: Discord, Attention, Chaos, Apples, Being a lamp
Dislikes: Being left out of events, Threats, Meetings

Attack Method: Eris has others protect her or uses chaos to fight.

[Show-Off] Neutral trait
This character boasts about their skills, and often want people to watch them do things to show off how good they are at it.
[Talkative] Neutral trait
This character will talk for ages if allowed and rarely runs out of anything to say.
[Multitasker] Positive trait
This character is able to handle doing multiple tasks at the same time, and remembering exact instructions for them. Characters with this trait will generally prefer to handle multiple things at once.
[Passionate About Discord] Positive trait
The character has a strong passion for some area. They might know more about this stuff than others, or may perform better on tasks relating to this topic than someone else with equivalent traits and skills.
[Impulsive] Negative trait
This character makes decisions quickly and often without thinking about the consequences. They are prone to taking actions based on their feelings and failing to see the big picture.
[Infamous] Negative trait
This character is known and widely hated throughout the universe. They may have to deal with people avoiding, getting mad at, and/or refusing service to them.
[Narcissist] Negative trait
This character is utterly in love with themselves and will make sure that everyone knows about it. This character will commonly move conversations to be centered around them which can mean that the conversation completely misses its point or everyone else in the conversation become increasingly agitated.
[Metronome] Ability trait
At random points each day, the character with this ability will randomly receive an item in their inventory of worth dependant on that character's luck stat. If this trait is on a pet, that item will either be deposited in the owner's inventory, or the pet's inventory if it has an inventory system.

If you spot an Eris ship call the police immediately, and you may be rewarded with over 50kp for your help. Do not approach this ship as reality bends around it.

Every consort under Eris gets their luck stat changed to a chaos stat.

There is only a single Eris. There may be at times multiple Erises but all of these Erises are the same Eris. One needs to understand that nearly nothing about Eris makes any sort of sense and that one should take everything about Eris with a grain of anti-matter.

Eris has a very lamp-like form with her “head” or “eye” being the part where the light should come out of. Eris has two hands with claws which float and move around her with ease. She has three “legs” which are fairly awkward to walk with. Eris is both an extremely pitch black and a very bright gold color, any attempts to paint her any other colors do not work until they do.

Eris also has a single “eyebrow” which she uses to express herself; she will also sometimes use this “eyebrow” as a mouth. No one is quite sure what the “eyebrow” is.

Eris as a whole is very fragile. Not only is she just a tad over 2 feet tall, but her slow speeds and weak metal mean that nearly anything can destroy her. Her only defense is her randomness and others who attempt to protect her.

While there are rare times that Eris changes shape, normally to scare off people trying to kill her, the changed form does not change anything about her and she is just as fragile in her new form. If Eris is hit in this new form she will change back.

It is very likely that Eris is not a robot nor an AI but is in fact an entity. This situation is the elephant in the room that no one wishes to talk about.

Describing Eris is considered nearly an impossible feat by most.

The best description of Eris that can be given is that Eris is completely random. Her taste and emotions can change at the drop of a dime if she feels it would be comedic to do so. Her true personality can be hard to grasp from her layers of cover-ups; even Eris might be unsure of what she is. It is possible Eris might have lost her true self to her own madness, not that Eris would care if she did as Eris loves nothing more than pure mayhem.

Eris does not commonly care about what consequences her actions bring, even if they harm herself. Due to Eris being widely hunted for her chaos, she is skittish if she doesn’t have anyone to protect her around. Eris’s slow speed and horrible defense just contribute to her nerves in regards to this.

Eris can normally be described as boisterous to make up for her small size. She enjoys being the center of attention when she feels safe or she knows she has just the right amount of chaos on her side to get away with it. She does feel bad if any of her friends get hurt attempting to protect her. She is poor at keeping friends which has caused her to be left with just 2 of them, with one who is only friends with her because the other is.

Eris does not quite understand emotions as well as others. She will attempt to cheer people up in the strangest of ways, such as summoning tiny Helios units, turning the person into a cake-shaped fish, turning a whole planet into birds, and ending all life in a solar system using only hand lotion and a bag of chips. Eris is easily the most powerful of the gods, causing the great fear and hate surrounding her.

There is no usage for Eris and many believe the universe would be a better place without Eris.

Eris has a great amount of power, being able to transform herself, others, objects, and even spawn the living out of nothing. Eris might even have the power to solo one of the lesser limbo gods but attempting to control Eris is not worth it.

Athena: Athena is the sole protector of Eris; anyone who has tried before has failed. It is unknown why exactly Athena has taken up protecting Eris. However, Eris doesn’t seem to even wonder why, believing Athena is protecting her because she’s just that good.

Nike: Nike and Eris get along, for now. Nike is mainly Eris’s friend because Athena is Eris’s friend; before this, Nike actively hunted Eris for the reward she would get from her. Eris has long forgotten about the hunting Nike used to do. Nike has not, but for now they both enjoy each other’s company.

Helios: Nobody's quite sure why Eris appears to have a slight obsession with Helios.

Aphrodite: Eris likes to use Aphrodite as her fall guy for many situations; Aphrodite has become smart enough to know what Eris is up to, though.

Pales: Eris dislikes Pales because she associates them with frequent meetings. Pales doesn’t care because they know everyone associates Eris with being a terrible person.

Eros: People often accidentally mistake Eris with Eros. The difference between a lamp and a sexy robot is subtle.

Hypnos: Eris is one of the few people Hypnos gets actively angry over as she frequently ruins his sleep.

Eris has an extreme amount of power, able to do almost anything she wants at any given time. Eris does not appear to contribute much to the universe itself though. It’s noted that if Eris is killed then much of the stranger random events will disappear, never to be seen again.

Eris cannot be gained as a patron via normal means. If Eris does become the player’s patron there will no longer be luck rolls, only chaos rolls. Chaos rolls are always “neutral” to your crew and higher “numbers” only cause stranger things to happen. It should be noted that chaos rolls are not always numbers, but can be things like fish, the concept of time, or 2 churros fighting for supremacy in the wild.

Eris godheads can have any of the powers of any other type of godhead, but their power changes everyday at random. As such, they are always attempting to learn their new powers. Eris godheads tend to have floating hands and wings.

Eris is special enough to not need info in her special section.

• There has been at least 1 incident where everyone on a planet had to be turned into birds because of Eris' actions.

• The first time Eris was spotted was at a factory where ships were made at. One of the workers reported a lamp "running" around. By the time someone found the "lamp" again the lamp, which was Eris, had gotten into a ship and took off. There is absolutely no records of a ship like the one she got in being ever created at that factory. An hour later an office worker would report that the table lamp she had on her table for 3 years seemed to have disappeared or was stolen. The company replaced the lamp and proceeded to pretend the incident never happened. 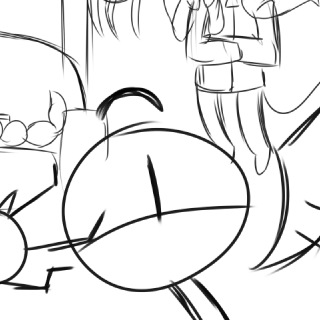