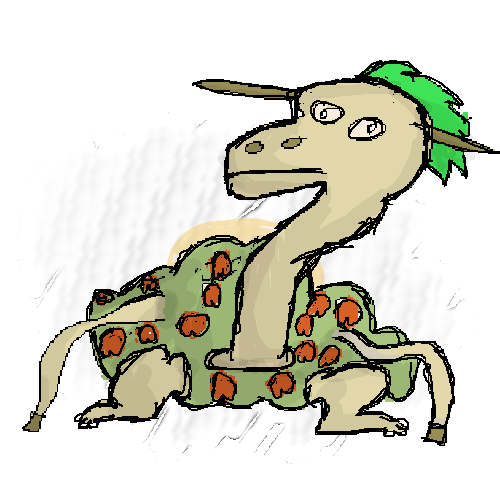 “There's nothing quite like a refreshing glass of eggmilk after a long day of picking appleggs.” — Slogan of the Meg Farmers' Council

Attack Method: Waves its head back and forth to gore attackers with horn.

A mess of an animal. Has a horselike upper body with three arms, froglike legs, a bright mohawk mane of thin, needlelike leaves that look like hair, and a shrublike covering of leaves made of cartilage. Multiple red, yellow or green apple-looking pustules are produced from the bush. Meg born in areas with poor soil sulfur will have greener eggs.

Meg spend most of their time looking for food or water. They attempt to attract swarms of insects to their bush by producing attractive apple-looking "fruit" with an egg white interior that's simply irresistible to pollinating fauna of their home planet. They reproduce by laying eggs which are filled with milk. When the hard-yolk at the bottom of the egg absorbs enough milk to grow into a baby meg it will hatch. The parents will raise their offspring with a "milk" that has the appearance and taste of apple juice. Meg are docile in nature and were easily domesticated.

Foodmaker: This fauna provides many rations to anyone who owns them.

• Meg are raised for their eggs, apples and milk in many disparate environments across the universe. Their spread was facilitated by a group of Pluto units.

• It is said that meg were created by a god at the request of the masses for there to be more abundant livestock creatures in the universe. Legend has it that the god waited until right before the deadline to start, and as a result created an all-in-one creature that produced eggs, milk, meat and fruit instead of many separate creatures. Legend also has it that, due to pressure of making the deadline, the god was heavily intoxicated at the time, resulting in everything being mixed up.

• The above-mentioned legend makes no sense, because it is completely normal to crack open a nice egg of milk at breakfasttime in this universe. 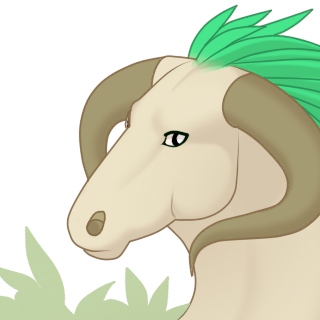 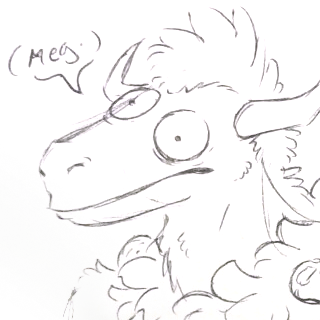 -Back to Fauna Menu-
< Marmic
Monike >