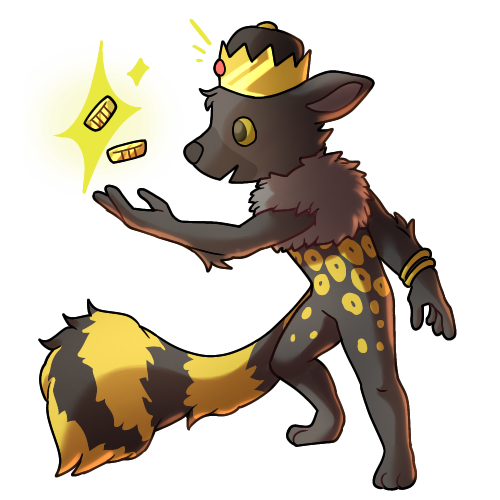 “Hello mortals, I'm Ronald the messenger god. I've come to bring you precious sustenance in the form of this beautiful disc of decorated bread.” — A sirrhingi delivering a pizza

Attack Method: Informs the opponent that they're a god and attacks without any sense of self preservation.

Though sirrhingis consider themselves gods they do not actually worship each other.

Sirrhingis' furs come in multiple colors, one for their fur and one for their markings. Both the fur and the markings can be black, brown, grey, golden and less commonly orange. sirrhingis usually have lighter fur and darker markings, and sirrhingis with darker fur and lighter markings are considered more attractive, especially if their eye and marking colors match. sirrhingi tend to wear ring shaped jewelry, and are only concerned with the aesthetic of it and not the quality of the materials.

Most sirrhingis are convinced that they are immortal gods, normally believing themselves to be a god of a specific thing which is often some kind of academic field. A sirrhingi engineer might think they're a god of machines and a sirrhingi farmer would think of themselves as a god of the sowing and harvest. Sirrhingis think that their 'godhood' makes them extraordinary at their jobs, far beyond the ability of 'mortals'. However, while sirrhingis can be very clever at their jobs, the vast majority of them are nothing extraordinary.

All these sirrhingis are thoroughly convinced of their immortality. Even if they personally witness the death of another sirrhingi, they will assume that the sirrhingi has merely entered 'godly sleep', a type of hibernation that conveniently causes a sirrhingi to sleep for longer than a sirrhingis life can actually last. What helps to keep this illusion up is that sirrhingis are extremely frail and will often die from things that would cause minor injuries in other species. Because of this they will commonly die instantaneously, allowing the other sirrhingis to easily tell themselves that the dead sirrhingi merely went to sleep, or de-materialized. Their belief of immortality also means that there are practically no sirrhingi doctors, at least among the normal ones.

If the delusion of immortality of a sirrhingi is ever broken, they suffer from a massive blow to their confidence and develop an extreme fear of death. Nothing is more frightening to a sirrhingi's mind than death and a sirrhingi that realizes it can die will do anything to avoid it. It's often in the best interest of an employer or friend of a sirrhingi for this delusion to be kept in tact, as sirrhingis might quit their jobs and leave their home in the pursuit of safety or immortality once they know they can die. This is not very hard as sirrhingis are very good at making up reasons why something doesn't disprove their godhood or immortality.

Sirrhingis are brought up to be altruistic and are taught that it's their duty as a god to make life better for mortals and other gods. As a result of this they often make plans for big engineering projects to improve life around them such as transport systems or water cleaning plants. Sadly, sirrhingis vastly overerstimate their own lifespans and generally don't even get to start on projects like these, though have been rare occasions where a sirrhingi lucked their way into having money and built their big project. Sirrhingis often want to work in other people's projects to improve society as a 'warmup' for their own project and can let themselves be extremely underpaid if they've been convinced that a project contributes to the greater good, even if the employer carrying it out is clearly in it for the money. What bums out a sirrhingi more is taking a job that doesn't match the kind of god they are, as they will think they are wasting their potential.

Sirrhingis were a species of primates that mimicked a deadly poisonous frog from their planet with their appearance. This meant they had very little to worry of predators, and the species never developed any kind of defense besides looking like this frog. As they became smarter, the species became painfully aware of not only its mortality but how easy it was for it to die. Sirrhingis stopped climbing trees for fruit, fearing a fatal fall, and despite being able to build sturdy, comfortable homes they would build only the lightest huts for fear of being crushed by bricks. Sirrhingis lived in the most numbed environment for fear of an early demise while they counted their days as if death was marching towards and they were counting down the steps.

The chieftans of the tribes that the sirrhingis lived in at the time felt a need to put a stop to the misery their people lived in, and so they came up with a lie that's told to this day: The sirrhingis were gods. The chieftains each sent one of their children to another tribe, and had them lie, saying that they had been alive centuries ago and had just awoken from a 'godly sleep', because what they though was death was just a morning nap for the immortal gods that they all were.

The sirrhingis were skeptical of the lie at first, but at the same time any alternative to the certainty of death was a very thing for them to believe. With some hesitation the sirrhingis began to take more risks. They got fresh fruit out of the trees again, instead of eating fallen fruits that had already been bruised and gone sour. They made houses with walls and roofs again, and made works of art so the other sirrhingis would know who they were when they awakened. With each passing generation, the sirrhingis told their lie with more conviction, and they all the more happy and lively for it. Everyone except the chieftains, who knew they were lying. They had to suffer in silence, not even speaking the truth to their spouses, and arranging for more of their children to 'wake up' and tour the other tribes to keep the lie standing.

That is until one of these sirrhingis made a scientific breakthrough: He managed to put the brain of an old sirrhingi into the body of the new one, and resulting brain-body combination acted like the old sirrhingi but showed no signs of old age. The sirrhingi chieftains jumped on this discovery, and instead of training their children to be their successors they started using them as replacement bodies. Without their own deaths looming on the horizon, the chieftains, rebranding themselves as 'god kings', began guiding their people with long term goals in mind. Their society became more advanced, and within a few dozen generations the sirrhingis had discovered space travel and integrated themselves into the intergalactic community.

High class sirrhingi: High class sirrhingis are the sirrhingis that hold the title of 'god king' or 'god queen' in sirrhingi society, as well as their children. These god kings are aware that sirrhingis are mortal and they are the ones working to keep up the species' shared illusion of godhood. Some of the god kings are charismatic liars with the job of making their people believe the lie, others have administrative jobs that need to account for death and yet others are surgeons who perform brain transplants on the high class. This is how the god kings keep themselves alive, by repeatedly transplanting their brains into the bodies of their own children. The high class has selectively bred itself to be attractive, usually spotting black fur and golden or silver markings. The god kings keep multiple children around in case some of them die, and usually select whichever child has the prettiest colors. If there is an emergency and they don't have any bodies available, a god king might have their brain transplanted into the offspring of another god king.

It's not viable for the god kings to pretend they are the person whose body they stole, so after they have their brain put into the new body, the rest of their children will come to the horrifying realization that they can die, and that their parent not only killed their sibling but is wearing their body as a means prolong their own life.

If these high class sirrhingis don't spend the rest of their lives in anxiety and misery, they usually try to pursue immortality somehow. Some of them try to become so important or powerful that they too will be allowed to have their brains transplanted, though it's more common for them to try to gain immortality via supernatural means, for instance by joining limbo or necromancy cults. There have been counts of high class sirrhingis intentionally consuming clockwork flesh in an attempt to live forever as a clockwork, only to become an aggressive monster.

• The high class sirrhingis have been offered memory uploads to end their practice of brain transplants, but sirrhingis aparantly believe themselves to be their brains and anything that just saves their memories is not considered survival by them. Sirrhingis that find out about their mortality tend to come to the same conclusion.

• The high class sirrhingis vastly prefer hiring volkronn for security purposes ever since one of their leaders had a very positive experience with a volkronn bodyguard.

• When discussing the limbo gods, sirrhingis are generally of the opinion that the limbo gods are bad people who are bad at being gods and that they will do a way better job at being a god than them.