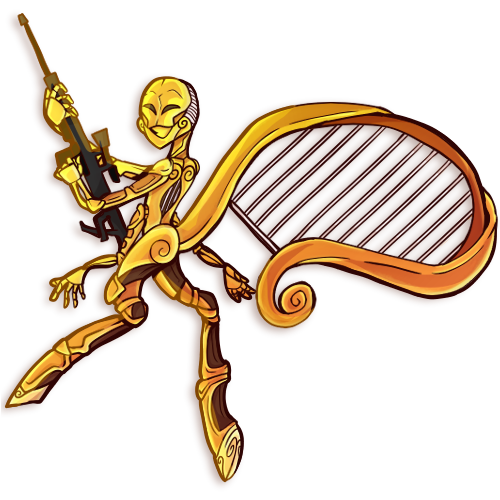 “Prepare for a performance unlike any other, a once in a lifetime experience, illustrating the true beauty of music!” — A minstrae giving its 7th performance of the day

Attack Method: Minstrae prefer utilizing long range weaponry as not to damage themselves, but in a pinch can use instrument tails to strangle opponents.

[Musician] Neutral trait
This trait is similar to [Artist], however, a character with this trait specializes in musical talent rather than creating visual art.
[Persuasive] Positive trait
This character not only has a way with words but people are ready and willing to listen. This trait means this character has a better chance when trying to convince a character to do a deed. Sometimes this character might even be willing to convince others to do things they'd never even consider before.
[Attention Seeker] Negative trait
This character wants attention. They are obsessive over it, and will do anything and everything to get attention from others, whether it's faking injuries, mental conditions, or making up any types of stories about themselves to grab a person's attention. Attention seekers may even tell half truths to spice up their stories to make themselves seem more heroic.

The minstrae do not usually honor any gods.

The minstrae are bipedal delicately designed forms, their physical forms have the motif of the instrument protruding from the base of their spine as a tail. They have two sets of arms, the ones lower on their abdomen smaller than their main arms. Their feet end in flat soles which are hoof-shaped.

They contain organs only within their heads and chest. They can be comprised of various materials based upon their instruments, such as plastic, wood, or various metals. They can theoretically have any instrument as their basis/tail, but the most common are defined in the subspecies.

The minstrae are natural attention seekers with high regard for their musical ability. Individual personalities usually depend on the caste or type of minstrae, as lower-class materials such as plastic within the minstrae society tend to be friendlier and more energetic, with less of a focus on conformity within their instruments' caste.

High-class materials such as metals will conduct themselves in a professional manner with an air of superiority, holding themselves and others to strict standards for their designated place within society. Minstrae are social creatures with a penchant for bragging, no matter their class or material, and will willingly go on for hours about their own abilities and performances.

Originating from rudimentary golems who grew from natural material or ore pockets in caves, the original minstrae were far from the sleek and intricate forms they currently possess. What was the small society of minstrae at the time stumbled upon abandoned research vessels containing various off-world items, and they naturally were drawn to the few instruments within the storage.

The next few generations of minstrae spent their lives refining and understanding the complexities of instruments and using them as the chassis for their reproduction process. Over time, those born from particularly well-constructed or rarer instrument materials were more revered and respected and established the class system based on their makeups, as well as a caste system for work to begin industrializing their planet to better suit their more 'enlightened' forms.

The minstrae homeworld, Keloquis, has been fairly industrialized with large cities and grandiose architecture. Most areas are devoted to places of performance or study, the greatest exception being the huge mining operations spanning all over the planet which leave great gaps and holes along the planet's surface.

Strings: The Strings are regarded as the mintrae's most tactfully social class, who often operate as hitmen or diplomats. They are graceful and sleek who know when to hide and when to shine.

Brass: The Brass are the most physically sturdy of the minstrae as their type of instrument is least versatile in material, so their makeup seldom varies. They are blunter and straight to the point about most matters. They usually work as construction workers, bodyguards, or other physical labor-intensive positions.

Woodwinds: The Woodwinds are the scholars of the minstrae. They have a greater purpose than simply performing for others and so dedicate themselves to understanding and improving things, but as a type tend to be more reserved and shy. They usually work as scholars or engineers.

• The minstrae culturally regard their second pair of hands as 'playing hands' and will often unconsciously create background music for whatever situation they might be in unless they specifically are using their playing arms for another task or are trying to stay quiet.

• Minstrae are living instruments by virtue that they are born from scraps of their parent's organic organs and begin to grow into and from their natural instrument, the actual instrument used as a kind of shell or, to be put more bluntly, skin.

• A minstrae will rather improv an entirely made-up song rather than refuse a request they don't know.

-Back to Species Menu-
< Mialcsem
Mite >