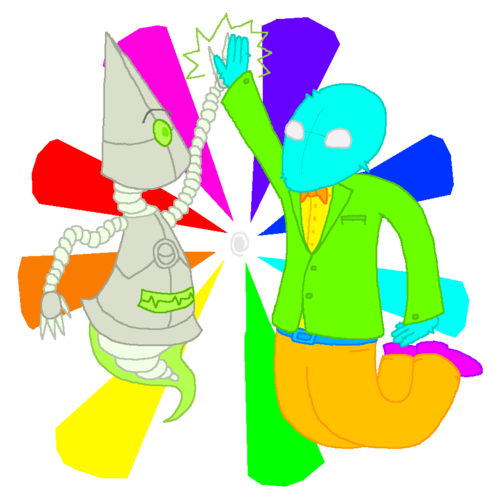 Attack Method: Skabels often have small machines on hand that they'll send at attackers. If not, they typically try to create a makeshift weapon out of anything nearby.

Skabels mainly worship the ancient master of creation Skabern, who is said to have had the power to create organic life before mysteriously disappearing. Skabern supposedly created the skabels as their last act. Some skabels believe that Skabern is actually the Creator from the limbo religion, and have grown to spite the god they once honored.

Skabels look like humanoid entities made out of colorful dimly-glowing energy, flickering like static. This energy is almost always a single solid color, although some skabels have a condition similar to vitiligo causing patterns of other colors across the body. Small "sketch lines" mark their joints and faces, glowing slightly less bright than the rest of their bodies. Despite appearing volatile and holographic, their bodies are solid for the most part, and only give a small shock of numbing static electricity when touched. Skabels have large, empty white eyes and no visible mouth. They eat by putting food where the mouth would otherwise be. Skabel fashion is characterized by bright and flashy colors on normally dark clothing, including neon pink pinstripe suits, titanium white leather jackets, and luminous orange top hats.

Skabel AIs are always unique and bizarre. Various AI designs include a humanoid robot with a single massive gear for a head, a skeletal cloaked mantis with scythes for limbs, and a mechanical head with tiny wheels and a gun taped to it.

Skabels are obsessed with creating things. If one meets a skabel, chances are they're "taking a break" from working on a project. Whether this project is a massive sculpture, a new invention, or a small painting, a skabel will almost always be creating one thing or another. However, their perception of breaks can often be skewed, causing them to take year-long absences from their relatively small projects.

Skabels are an incredibly optimistic species overall. It's in their nature to look on things positively and have hope that the future will be good. This often tends to work against them, however, as they can underestimate how much things can impact their lives. They believe every problem can be solved with some new creation, no matter the severity. After experiencing a great loss, skabels can become pessimistic, drastically changing their behavior. See subspecies for more information.

Most skabels will create a AI at some point in their life. Skabels are taught coding from a young age, as building a companion is seen as a coming of age ritual. Due to an agreement made after the Creation Revolution, skabel-created AIs are to be given the same rights as skabels. Most of the time, these creations will become good friends with their creator, and follow them around as best buds. However, very rarely the creation will turn against its creator, and will run off to try and live their own life. This is one of the few things that can make a skabel pessimistic. Oddly enough, these creations often come back, happier than they were before, returning the skabel to their usual mood.

The skabels were originally a species of artisanal craftsmen, spending their entire lives on perfecting their work. They created pottery, furniture, art, and homes, keeping their creations in perfect condition as they grew old. Hundreds of millions of these ancient skabel works can still be found belonging to the descendants of those who created them, causing the planet to look like a bizarre mixture of new technology and old simplicity.

The skabels were first discovered right as their technology reached the point that they could create robots. Skabels, delighted that they could share their new work with others, began to make robots obsessively. Skabels all across the planet worked tirelessly on designs for AIs, and submitted them to the government for review. The best designs were mass-produced and sold all across the universe, causing the skabels to become an excessively wealthy and prosperous species. The need for AIs during the Extinction Era made the skabels work in overdrive, putting out hundreds of designs for combat robots every year.

However, this did not last. As the AIs began to revolt, the skabels were one of the main targets. Due to having such a large amount of AIs on the planet, the skabels barely stood a chance. After many skabels were hunted down during the Creation Revolution, an agreement was made. The AIs the skabels created would be treated as equals instead of products, and would have their own rights. Although this agreement has stood strong, some have accused the skabel government of unethical reprogramming of AIs. These claims have been investigated and proven false, but certain conspiracy theorists still believe this to be true.

Pessimists: While not a true subspecies, the personality of a skabel can change drastically under certain conditions. Once a skabel has lost a companion, they will become incredibly sad and hopeless. This lasts until they find a new companion, either by building a new AI, having their original AI return, or just having a nice long chat with a friend. Sometimes, however, a skabel will stay upset forever. While in a negative mood, skabels turn a more muted version of their usual color. Their optimism is replaced by a striking sense that nothing will ever be better. In this state, they build things obsessively, not taking any breaks at all. Once they build a robot they consider a friend, their bright and happy mood will return.

Grand Skabels: Grand skabels are impossibly rare. Only up to 256 exist in the universe at any given time, as stated by the grand skabels themselves. At least a hundred of them live in the capital city of Oprindelse, running the skabel government. Grand skabels only come in monochrome shades of black, grey, and white. They have one eye, which unlike other skabels, has a pupil, and are sometimes seen with glowing wings or halos. Their lifespans are unknown, but are rumored to be centuries longer than skabels. Seeing a grand skabel off of Ren-Tavle is said to be extremely good luck by the superstitious.

Live Energy: A skabel's body would most accurately be described as being made of non-newtonian energy. Their bodies aren't fully solid, and seem to be made of pure energy when no force is being applied. However, once force is applied, this energy solidifies under the force, and turns into a surface comparable to a force field. This is a weak barrier, however, and it'd be possible for someone to push their arm right through a skabel with enough force. This would be a very painful process for both parties. For the skabel it would feel like getting impaled, and for the aggressor it would feel like sticking their entire arm into a power outlet. If stabbed or slashed, the barrier would be damaged and energy would slowly leak out of the Skabel like blood, eventually causing death without medical attention.

• Skabels are born in the cordoned-off chalk catacombs of Oprindelse, supposedly "popping into existence from static" according to the skabel government. Over 110 million infant skabels emerge from the catacombs each year, although many are shipped off to other planets.

• Skabels who follow the religion of Skabern prick their fingers and let their own energy leak into the circuits of their AIs as a finishing touch while building them. They see this as "connecting with their creations on a fundamental level." This does not seem to affect the AIs they create in any way.

• Once they reach the age of 111, skabels simply fizzle and fade out of existence. This causes distress for the skabel's AI, which, without the companionship of its creator, will inevitably head to Ren-Tavle and be willingly recycled for scrap. This scrap is given to young skabels to make their own AIs out of, beginning the cycle anew.

-Back to Species Menu-
< Sirrhingi
Skarv >