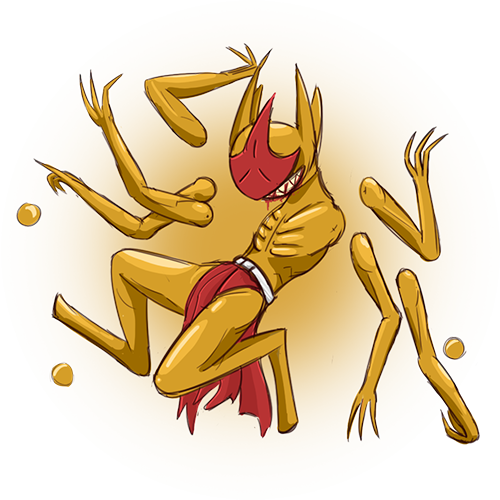 “Do you think it's funny? You think life's a joke? It's not! And it's NOT FUNNY! HAHAHAHAHAHAHA” — The Laughing Man

Job: None
Likes: Surprises, Shocking revelations
Dislikes: Jokes, Gods, Faiths
Notable contributions: An enigma. It would be unbelievable folly to leave him out.

[Web of Lies] Mystery trait
Do you even remember if you're telling the truth any more?
[Uncanny Valley] Negative trait
Everything about him is wrong, just a little. He just doesn't quite make sense.

The Laughing Man is a twisted mess. We do not know why. His golden shoulders are connected to nothing, and a nest of emaciated arms hover around him. All of their three claws are terribly sharp. We know this now. His chest is always bare, ribs clear against his skin. And from it, an unearthly glow. Things rise up around him, whether object or living. Or dead. His head is like no other being we have seen, golden ears pointing sharply behind a three-slit mask. The mask is a face to him, and beneath it his teeth. The teeth are always bloody, and he smiles and he laughs.

He eats so much. How can he still starve? We do not know. His legs end in mere stumps, but this troubles him not as he floats and hovers, capering in the air as he laughs. And smiles. And laughs.

The Laughing Man defies our simple explanation. He simply is.

When the Laughing Man laughs, there is no humour to it. We know that he laughs because of what he is. What he has made himself. But laugh he does. Always. Sometimes he sleeps. But even then, you can hear him laugh. We do not know why.

We do not ask what he means. Not any more.

The Laughing man is not a god. He is not an anomaly. He might be a demon.

The Laughing Man is not immortal. He can be killed. But he has not yet been. And he won't be. Not by you, anyway.

We believe the Laughing Man had a beginning. He was not always this way. But he made himself this way. Only he knows how, and we no longer dare to guess. Did he have a family? Did he have friends? We found a picture of the Laughing Man carved in stone in a cave buried for a hundred thousand years. But he says he is not old. He says a lot of things.

All he tells us is that he did this to himself. He made himself into this. Does he even remember why?

Self-Made Man: Divine beings of all types have great difficulty perceiving or affecting the Laughing Man in any way unless he acknowledges them in their presence, whether deliberately or through someone's trick.

• Where the Laughing Man goes, things become as they once were, then return to how they are. Things stop being how they should be. And the people laugh. How they laugh. How we laughed. It doesn't seem funny any more.

• Why were we laughing?

-Back to Legendary Menu-
< Lad
Legate of Life >