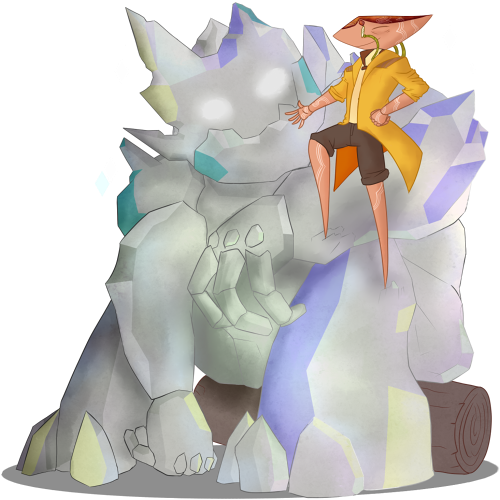 “They all told me it couldn't work! I could never get stones to move by their own! Well look at them! Look at them and tell me, stones can never move!” — Ivan Cortz

Common Jobs: Display, Attempting to stop their species from going extinct
Likes: Corzt, Working non stop, Helping with whatever they can
Dislikes: Not working, Being lost, Losing Cortz

Attack Method: Whatever they are commanded.

Their only god is Cortz.

Cortz are crystalline golems, covered in sharp edges that almost parody muscles. They have a hunched over, ape-ish posture, and long arms ending in large hands. They mostly come in that off-white quartz color, but other colors also exist. The difference is purely cosmetic.

The cortz are work-oriented, calm, and strong. They are physically sturdy, but neither violent nor socially adaptable. They do not require sleep, and are not given to particularly strong emotions. The older ones have a philosophical side. They lack natural reproduction. They treat walking upright versus knuckle-walking, or with "fists-and-feet", as a very serious debate. But they seem to change their minds about it constantly, which is either comical or just weird to other species. They do not use contractions.

The cortz were created as a slave species by Ivan Cortz, a self-proclaimed mad scientist. Unfortunately for him, it did not occur to him to actually sell any. Ivan Cortz died in a lab mishap, and without a new owner, the cortz became emancipated. The cortz are trying to find out how to continue their species. They feel they can't just copy Ivan's notes outright as that would just create more slaves, but without some method of reproducing, they would die out eventually.

• They typically work themselves to death after about fifty years, though they could theoretically live longer if they would just relax now and then. It is estimated that the Cortz will sadly go extinct in the next 300 years.

• Cortz naturally call anyone who is their boss, and objects they like, cortz. This was likely due to Dr. Cortz, their creator.

• Dr. Cortz was a klannec, who after being told he couldn't make a klannec out of gems set out to prove just that. While he was unable to make a klannec who was just made out of gems, he did create the cortz, who were gemstone creatures. Due to this all cortzs call klannecs Cortz and attempt to help them with whatever they need. Klannecs view Cortz as both their own gorgeous distant relatives and as an extreme show of fashion. Klannecs will often hire cortz purely to be decoration, much like one buys a geckerachaun as a pet.