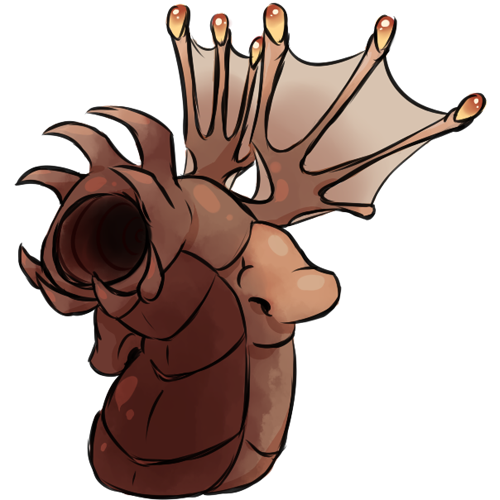 Attack Method: Charges at an enemy and latches onto it with its hand-head, then pushes it into its deadly drill mouth.

[Clumsy] Neutral trait
This character is more likely to drop objects or make small mistakes. Sometimes their mistakes end up being for the better, but most of the time the mistake are small.
[Respectful] Positive trait
This character is respectful and will respect the wishes of others or at the very least will make a compromise. Many others will feel safer talking to this character after their first talk and talking to them raises sanity and morale.
[Disloyal] Negative trait
When given the chance, this character may rebel against anyone who is higher up. They are more likely to lose morale when they do not get what they want or when they feel a higher up is going against them, even if the situation was justified.
[Dirt Strider] Ability
This character's agility is raised by 5 when they are on/in X, where X is a type of terrain. However, their agility is lowered by 5 when they are on land. X can be any kind of terrain except on land. Agility can be raised above 10 with this trait.

The mandgi do not worship anyone, preferring to focus on the here and now.

The mandgi have a bean-shaped body with a hard carapace. A mandgi's head resembles an eight-fingered hand, and its face consists only of a gaping, drill-like mouth. Instead of hands, it possesses giant noses on the sides of its body. On its back are dragon-like wings, on these wings are its eyes, and it possesses no eyelids or eyebrows.

The mandgi overall are extremely hardy and difficult to injure. The carapace is the hardest part of it, but the rest of its body is typically more endurant than one would expect from another species. Even its eyes are not necessarily a weak spot, as they are capable of withstanding much more than the eyes of most another species would be able to.

They are extremely agile and coordinated at burrowing and living in the sand. Their entire bodies have evolved and adapted to live on their sand planet and to move at high speeds underground; however, they are rather clumsy on land.

The mandgi are a very curious race. They are burrowers who live underground, surrounded by dirt and sand. They have not developed what one would typically call a formal society; they do not have any sort of hierarchy, instead living completely cooperatively as equals. The mandgi do not have any sort of cities, buildings, or technology and simply live in the sand. They spend their days hunting for food, and they spend their free time sculpting the dirt and sand into unique sculptures.

The mandgi have evolved to be amazing burrowers, using all their body parts to dig. When a mandgi burrows, it eats the excess dirt and sand. This is one part of its diet. The second part are the large insects which are numerous on their homeplanet. Unlike the mandgi, these insects live both above and under the ground. The mandgi are able to catch these insects by surprise by shooting out of the ground with their burrowing skills, catching them in their large head-hand and shoving them into their deadly drill mouth. Dirt, sand, and other soils as foods are able to sustain them, but does not provide all the required nutrients needed. A mandgi must have a balanced diet of both dirt and insects, or it may become malnourished. However, it will not starve as long as there is a good source of dirt.

The mandgi have a very good sense of smell, and are able to track someone down through smell alone. This is how they find fellow mandgi in the vast underground. Mandgi are able to breathe both air and dirt.

Despite their lack of doing anything other than hunting and sculpting on their homeplanet, the mandgi are in fact very intelligent. They are very compassionate, patient, good listeners, and extremely emotionally intelligent. They are also able to grasp incredibly nuanced issues, better than many other intelligent alien species. They simply have no desire to advance as a society, perfectly content with burrowing underground and sculpting dirt architecture all day. This calls into question, if a race this intelligent is content with a lifestyle such as this, what does this say about society?

Due to the mandgi lacking a mouth capable of forming speech, they are unable to speak limlish or any similar languages. The mandgi instead communicate in a language similar to whalesong. This can get very loud and is prone to scare off people who are not prepared for it. The mandgi's whalesong-like language has proven to be one of the hardest languages to translate. While there has been some progress, translators who are fluent in the language are few and far between, as it is immensely difficult to learn. Although they may not be able to speak them, they have shown that they are quick to learn new languages, and are for the most part able to understand what others are saying.

The mandgi as a whole appear to find societal hierarchy illogical and a bad idea overall. Whenever political issues are brought up, they are quick to point out that they think anarchy is the best idea to improving a society. They typically do not understand the point of any hierarchy, believing that when in a group, all should work as equals bringing each of their unique talents and thoughts to the table. Due to it being an alien thing to them, they will tolerate hierarchy at a smaller scale, such as in a ship crew. However, if they feel the captain isn't making decisions in a way that acknowledges everyone's needs, they are quick to question their captain and rebel. When there is a disagreement, they opt to discuss it at length until a compromise is reached, due to this, they hate stubborn people.

• Due to their lack of a society and incapability of speaking familiar language, many racist species do not view the mandgi as an advanced species, putting them on the level of wild animals, despite their intelligence.

• The mandgi's language has an extreme range of pitches, this being just one of the difficulties of deciphering their language. The high-pitched tones that add a lot of nuance to what they are saying cannot be heard by many species. Therefore, only species that have a high range of hearing can be accurate translators for the mandgi. 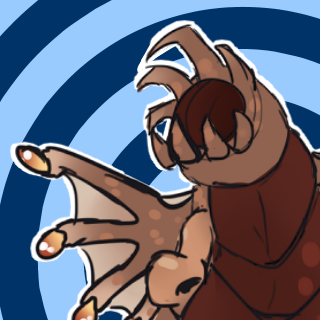 -Back to Species Menu-
< Malventus
Marmar >