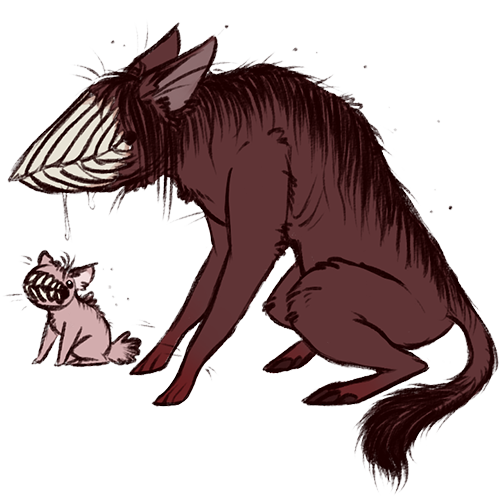 “This is Muffins...she's fat and drools over everything. I would die for her.” — A proud dentine owner

Danger Level: High
Likes: Watching you sleep
Dislikes: Prey that fights back, Being chased away

Dentines are a large, dog-like quadruped with a head that is completely dominated by it's own teeth. Their fur is a rusty red, with a mane running down their back made of black, stringy fur. The coat of a dentine is often described as being 'mangy', scraggly or even greasy. The dentine's limbs are long, almost stilt like, the front legs ending in paws but the back legs ending in sharp, cloven hooves. The dentine's tail is long, sweeping and ending in more of their stringy black hair.

The most immediately noticeable feature of the dentine is that their face is almost completely made of teeth. The teeth extend and come together in a point, nearly giving them the appearance of having a beak. These teeth are rather brittle, and will break off after biting something or someone with another force, taking just days for them to grow back more in their place. All dentine are born with eyes, but as they mature their eyes atrophy to make room for the tooth growth, and such as all adult dentine lack any eyes all together. To make up for losing their eyes in adulthood, dentines have very large ears that are extremely sensitive to sound. Not only that, but the dentine's head is also adorned with long, sensory organs similar to whiskers that are able to pick up on scents and subtle movements of objects and other living beings around them.

The vocalizations of dentines are eerily similar to the sound of someone forcing a laugh, in an uncomfortable, breathy manner. They rarely do ever vocalize, and when they do it's either when the dentine is threatened or distressed.

On most accounts of those who have worked with, studied, or been within the same room as a dentine, will most likely describe their temperament as quiet, but somewhat unsettling. Dentines in the wild usually live alone, only pairing up with one another when it comes time for breeding, but otherwise will avoid forming packs as dentines are highly food aggressive. They are a very patient animal, given their unique style of hunting. When not actively seeking prey, they are simply 'watching' prey from afar for hours on end, in spite of the apparent lack of eyes. Those who live within close approximation of a dentine population may fall victim to this stalking behavior they exhibit, as many would recount dentines watching them from outside a window, or from the foot of their bed as they sleep. This behavior is not always followed by an immediate attack by the dentine however, and it's not always so clear when the creature is sizing up one as prey or will just leave as it is finished observing.

The dentine's method of hunting follows several steps, and intensive patience on the part of the hunter. When the dog has selected it's prey, which is often a large grazing animal, it'll chase it down and deliver a bite that will infect it's prey with a particular disease carried exclusively by dentines. If the animal is to attack or chase the dentine in turn, they are quick to defend themselves with their back legs armed with sharp, cloven hooves.

Within the coming days, the infected area where the prey was bitten will begin to sprout teeth, those that resemble that of the dentine's rather than the infected animal's own. The area will spread over the course of several weeks, and with the dentine trailing close behind the dying prey, it will usually step in before the disease kills it first. In the case that the disease does however, it is often caused by teeth growing within the throat or stomach of the creature, which will invariably die of suffocation or internal bleeding. However, despite of the horrifying disease that wild dentines carry, there is a fairly large group of those who keep, breed, and adore them. Domestic dentines are vaccinated at birth, and are known as being very affectionate and loving towards their owners. Although, domestic dentines will still display some behaviors that their wild counterparts act on, most commonly being staring at their owners for extensive periods of time.

Shuck: Shucks are a breed of domestic dentine that have even larger, longer teeth than the norm, and rather than the rust red, have a sleek black coat of fur. These teeth end in blade-like points, as they're bred to be guard animals and/or fight as capture creatures. While their teeth can cause devastating wounds, they are utterly useless when trying to chew and feed themselves. Owners of shuck dentines will have to carefully hand feed their pets in order for them to survive, which takes much time and painstaking effort on the part of the owner.

Dental Disease: All wild dentine are equipped with this disease. If left untreated for several weeks, the disease will prove fatal in nearly all cases. However, most hospitals carry vaccinations and cures for it, more likely in ones close to populations of dentines. If caught early, the disease is easily staved off, but if caught within the tooth sprouting phase, the teeth that have grown into the skin of the afflicted will have to get them pulled or risk infection.

Robots and other inorganic species will not suffer the disease if bitten.

• Oddly enough, as they neither originate from the same planet nor live within the same environment as them, dentines are drawn towards tall goats whenever they are within the immediate area. This behavior is not at all understood by those who study either animal, but dentines are seemingly at peace when around herds of tall goats, and never once has it been observed that a dentine actively hunting a tall goat before. It's unknown if this is only the case that tall goats will simply vanish when it senses that it is being targeted, or the fact that dentines become entirely passive upon being within the company of a tall goat. 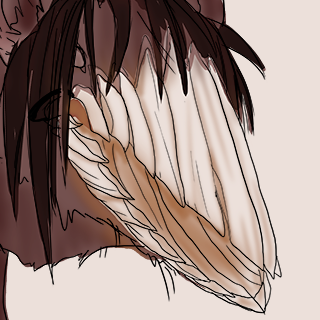