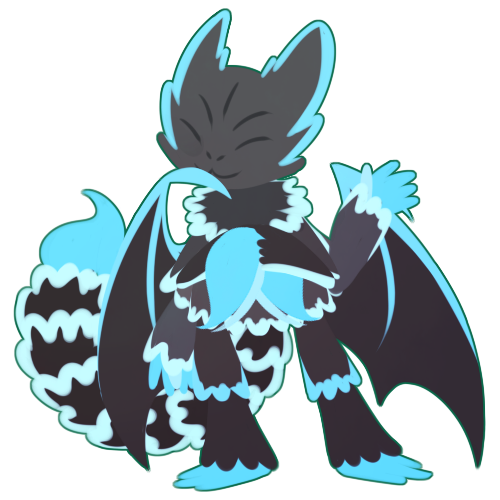 “They're quite strange little things. If you don't pose an active threat, and if you seem lonely, they'll do everything they can to make you feel like you can be at home with them. xvx” — X-17

Attack Method: A typical chira will not seek out confrontation, but in the event one does occur, they'll attempt to sting their opponent as quickly as possible to buy themself time to flee.

Chiraam honor the Neo and the Helper, in the sense that they spite them both by continuing to be hospitable in a hostile world where anyone can die at any moment for any reason. They also have their own god, Khaya, who they believe to be dying and hope to make her passing more peaceful through their devotion.

All chiraam have eight limbs; two legs, two arms that end in pincers, two arms that end in typical five fingered hands, and a pair of batlike wings. They also have a long tail with a stinger at the end that dispenses a weak poison that, while not enough to kill most sapient beings, does well in taking down their natural small prey on their home planet. They are completely covered in fur, with even their wings and stinger having a thin layer for insulation. This fur is typically dark gray, brown, or black, with a pop of bright color on their arms, legs, face, ears, tail, and the thick ruff of fur around their necks.

Every chira is born with five eyes, all on their face, but all five are completely nonfunctional. This is because they are leftovers from a time when chiraam were able to see, but have since lost use as their planet cooled and they moved underground, where it was much darker and sight was far less useful. As such, they typically keep all five of these eyes closed.

Chiraam have no sexual dimorphism, and all of them can lay eggs.

The easiest way to tell if a chira is nearby is to listen for the sound of chirping. This is because chiraam use echolocation to get around, letting soundwaves map out their path for them. As a result, their hearing is very sensitive, and they will often easily be able to pick up whispers or mumbles, at the cost of leaving them in pain in noisy locations. If a chira snaps at someone, most of the time it will be because everything is too loud and it's stressing them out.

Despite this, chiraam actually love chatting. They are very social creatures, and a chira without a large group will quickly become anxious and paranoid. A chira will function its best with 4+ others - not necessarily other chiraam, they simply need to be sapient - but even one other person will be enough to placate them. To an outsider, a chira gathering will look quite strange, as it will appear as though everyone is whispering to each other, but the truth is that their hearing is so sharp that this is all they need.

They primarily live underground, and most chiraam prefer enclosed spaces to large open ones. This is because their planet, Tayrada, is so freezing cold on the surface that the only livable areas are in underground caves around volcanic vents, and they evolved to feel most comfortable in such places.

Chiraam are incredibly friendly to strangers, and any stranger walking through a chiraam settlement can expect several offers of a meal and a place to sleep for the night from the locals. This is because their planet is so hostile that anyone who they don't help will generally perish, and as a result they developed a culture of hospitality; if someone isn't actively malevolent, then they'll be willing to share what they have with them. A chira will be even more insistent about doing this for someone they perceive as alone; to chiraam, to be without a social group is the worst fate imaginable, and there are very few people they wish it upon. They will in fact consider this a mark of honor, and will be offended if anyone suggests that they shouldn't do so or suggests that they cannot afford to. On the other hand, if the strangers reveal themselves to have malicious intent, no chira will have any qualms with tossing them out into the cold to die.

Living in such a hostile environment also makes the chiraam hyper aware of their own deaths. Phrases like "See you later," or making definitive statements about what might happen tomorrow is bizarre to them, as anyone can die at any moment for any reason without any warning. In fact, it's bad luck to them; acting like you can see the future might anger their goddess Khaya and attract misfortune. They don't see death as scary, though; if someone dies, it was meant to be, and if it is their own time to die, that was meant to be as well. This doesn't mean that they won't be sad if someone they were close to passes on, just that they don't regard it as something unfair.

When off-planet, chiraam are often used for mining operations, both on planets and on asteroids. Their lack of sight and natural habitat mean they lose no morale living and working underground for long periods of time as long as they have people to chat with and the machinery isn't too loud. They make ideal explorers of dark underground caverns for the same reasons.

Long ago, the chiraam's planet was a much more mild place. The chiraam's ancestors were able to live above ground, and there was enough natural light that they evolved eyes to see with. However, a few million years ago, everything changed; their solar system's star began cooling rapidly, causing a sharp drop in temperature that forced the chiraam's ancestors - as well as nearly all life on Tayrada - underground. It's estimated that millions died, and many evolutionary branches that may have evolved into subspecies were wiped out. Millions of years living in near complete darkness eventually led the already nocturnal ancestors of the chiraam, along with nearly every other complex organism on their planet, to lose the ability to see at all. By the time the chiraam evolved and developed enough to start recording their own history, the concept of "sight" was completely nonexistent to them.

Chiraam society is defined by survival. The extreme cold of their planet leaves their society clustered around these small pockets of heat, and as such the chiraam have never had any major wars. Minor skirmishes, yes, but full on war is unheard of; they simply don't have the resources for it. As such, they had absolutely no space program to speak of when a thankfully friendly species arrived on their planet and introduced them to the rest of the universe.

At first, the sicknesses spread by those who arrived had little effect on them; although their societies were clustered so closely together that plagues could easily spread, pathogens not native to the planet had a hard time surviving the temperatures, as although the volcanic vents make it warm enough for some species, it's still generally too cold for most of them to survive. However, this means that chiraam that leave their planet tend to become sick very easily. Taking the right vaccines prevents this, but enough horror stories spread of chiraam becoming horribly ill that many are still cautious, and as a result most rarely leave their planet despite how unpleasant it is.

Echolocation: Chiraam use echolocation in place of sight, and as a result suffer no morale loss from broken lights or dark environments. They're also able to navigate any dark area with ease. The tradeoff is that this chirping can alert others to their presence if they're not careful, bringing potentially unwanted attention.

Poison Stinger: The stinger at the end of a chira's tail dispenses a weak poison. This is usually not deadly, at most incapacitating someone with low endurance and barely slowing down anyone with high endurance.

• It's very common for chiraam parents to have their children's eyes removed and replaced with sturdier metal balls that aren't as fragile as fleshy eyes. The usual reason given for this is that, since their eyes don't work anyway, it makes no sense to leave in something that can only be a weak spot. It's also not unheard of to have the eyelids sealed shut so they cannot be opened at all, but this is slightly less common.

• Because their natural habitat is underground and they are completely blind, chiraam have very flexible sleeping schedules and will adjust to whatever the sleep cycle of the people around them is. As a result, even after widespread communication between different chiraam colonies became a thing, the chiraam never created any timezones for their planet; there's just one standard time as they already disregard day and night. 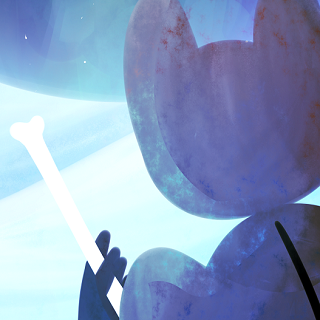 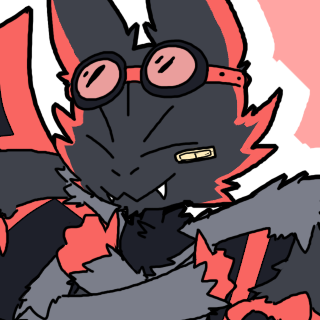