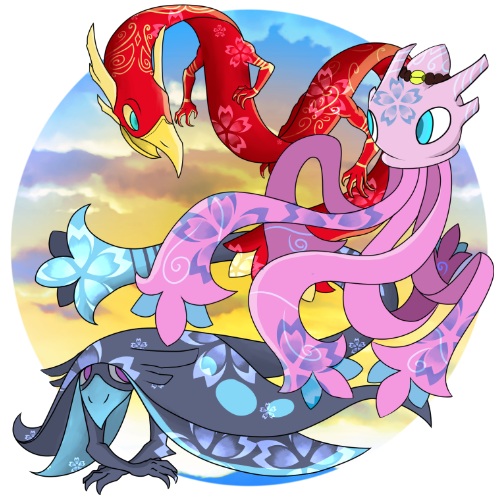 “The mother current tells us where to go, when to go there, and how far we will all go man, its a life of freedom, of constant mooooooooovement...y'know?” — A Malventus

Attack Method: If forced to fight, they will mainly dodge attacks until the attacker is too tired to continue and then run away. Rarely they will attack very weakly but very quickly.

[Affectionate] Neutral trait
This character cares nothing more then to watch out for and take care of other characters. They commonly end up the "parent" of most group and do their best to keep everyone in high spirits. Sadly some characters may not enjoy this at all or this character might mismanage their own personal time due to caring for others.
[Cute] Positive trait
Aww, well aren't you just precious! People are easily endeared to this character with their puppy-like look. Their presence is often additionally capable of increasing morale for the crew, assuming they like sweet things.
[Coward] Negative trait
This character will always try to back down from a fight, though they will still act in self-defense if they don't have a choice. If forced into dangerous situations, they will suffer morale loss, and will be more inclined than most to abandon their crewmates.

The malventus come in a variety of forms, all of which either resemble a kite or wind charm of some kind. Most often you will find one of three main varieties of malventus: The Dragon, The Jellyfish, and The Manta. Typically each variety of malventus will flock together with other malventus of the same variety, but it is not uncommon to see a flock made up of each type as malventus do not see different variety of one another as having any real differences or as being "lower" than them.

The dragon malventus are long and snake like in form, with a nearly flat body that they utilize to glide around on air currents. This form of the malventus is not all that dissimilar to the drakon, with the exception of being nearly flat like paper. Dragon malventus oftentimes have four bluntly pointed horns on their head, are vibrantly colored in shades of red, purple, green, or blue, and often have flower like patterns adorning their skin. The tail of a dragon malventus is splayed out in a flower petal like shape. Additionally, the dragon malventus have between two and three pairs of arms that can also be used as legs.

The malventus are known for being possibly one of the kindest species in the known universe, almost aggressively nice depending on who you ask. The malventus will not take no for an answer when it comes to being friends with a new species, despite the new species attacking them or being violent. In these cases the malventus will back off temporarily believing that the species "Just needs more time to realize how nice it would be to be friends!"

This has lead to the popular opinion of the malventus being very skewed, some find them to be one of the most annoying creatures to ever inhabit the known universe, while other species realize that they're more like naive but slightly smarter children who simply think the best of everyone and everything they encounter and wish nothing more than to become friends.

There are very few species that the malventus will go on record as being "not that nice of friends" most notably are the notails, the vayarasa, the aglaeca, the arma, some aftiks, and drakons. Though the malventus do also have a list of their "favored friends" these include but are not limited to: the marmar, the mialcsem, the klannec, other aftiks, the spooper, the ignalisk, the itzel, and oddly enough the oomn. For these "favored friends" the malventus will often give them personalized nicknames which they will then refer to their friends as for life, despite any complaints. Gaining a nickname from a malventus can, for some, be considered a high honor.

Additionally the malventus have a love of any and all typed of games and will oftentimes come up with new games and entire rulesets on the fly simply to satiate their desire to play. It is recommended that any crew with a malventus onboard keep a variety of games, be they video games, board games, puzzle games, or just about anything else. A bored malventus is an annoyance that no crew should have to deal with.

The malventus began their lives fairly simply, from the beginning they had a love for the wind and for freedom and would express themselves through singing, through traveling, and through play. For the longest time the malventus knew not that their homeplanet was host to more sentient life than just themselves, mostly due in part to them spending the majority of their lives in the air. In the brief periods of time that they would spend on the ground they would very unluckily not encounter any other life past fauna who wouldn't give them a second glance.

For the start of their history, the malventus were alone, with only themselves to keep company. This fashioned a desire in them to hold off boredom, the constantly be moving and playing so that they would never have to feel that unbearable loneliness.

Eventually, the malventus would meet another species: the nautalid. Unfortunately they met in an incident that almost resulted in the injury and death of a few malventus as a meal for the nautalid. After some talking and a lot of apologizing and pantomiming to one another the meanings they were hoping to get across, the malventus and nautalid became fast friends.

The malventus then knew, they weren't alone. They no longer had to fear loneliness.

From that point forward, the malventus would go on to meet the other species living on their homeplanet: the ignalisk, the terrietes, and eventually the artcuna living on the glacial moon above. Suddenly the malventus had more friends than they ever could have hoped for. And even more friends would come very soon, as each species worked together with one another to greet the galactic community as a whole.

Jellyfish malventus: The jellyfish malventus have large bulbous heads with two large eyes on either side and a diamond shaped "crown" on top of their head. This "crown" is often decorated with ribbons and more often than naught a small golden bell. Jutting out from the bottom of the jellyfish malventus's head are six flat tentacle like legs each ending in a flower petal like shape that it uses to propel itself while in the air. In the center of these legs is a beak like mouth that the jellyfish malventus uses to eat and shoot air out of to make minute changes to its direction in flight. The jellyfish malventus usually come in a range of pastel colors: mainly pink and blue, but occasionally they can be seen in white and grey. Like the dragon malventus they also have a variety of flower like patterns dotting their skin.

Manta malventus: The manta malventus have longer flowing bodies that are very kite shaped. They are adorned with a long flowing tail ending in a flower petal like shape, and two sets of large "wings" that it utilizes in flight. Additionally, underneath the center point between these wings is the main body of the manta malventus, which can be easily found by looking for the beak like mouth of the malventus. Due to its positioning the wings often appear to be almost draped over the head of the malventus giving them a very shy and trepidatious appearance. Like the other forms of the malventus, the manta malventus are also adorned with a number of flower like patterns across their body, but come in much more muted color sets such as a shark like grey blue or purple, or even in some cases pure black with white flowers.

Air Current Mastery: The malventus have a unique physiology that allows them to ride on air currents and utilize small gusts of wind from their own lungs to change direction. This is mostly due to their bodies having a unique organ that inflates and allows them to essentially become lighter than air.

Terrietes: The malventus really enjoy the presence of the terrietes but know to keep their distance when necessary. This is except for the cavern terrietes who they will gladly greet and speak with for hours on end. While the other terrietes are slightly standoffish or gruff toward the malventus, the malventus know that they are deep down yet another friend.

Artcunas: The first meeting between the malventus and the artcuna was rocky to say the least. The malventus, always being themselves, met the artcunas with friendship and kindness and an always joyous attitude that they were sure would eventually break the icey exterior of the new friends they hoped to make. Eventually this did in fact work, and the malventus and artcuna have been "chill" ever since.

• The malventus are the only species that the aglaeca will run away from, as they are described purely as "Horrible annoying flying things."

• The malventus, while physically weak, are widely known throughout the universe as being fantastic delivery people.

• A flock of malventus is known as a festival. 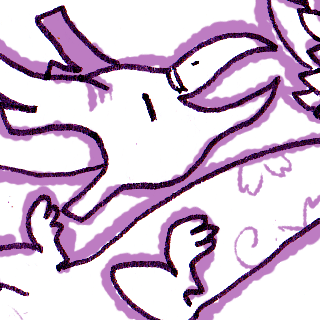