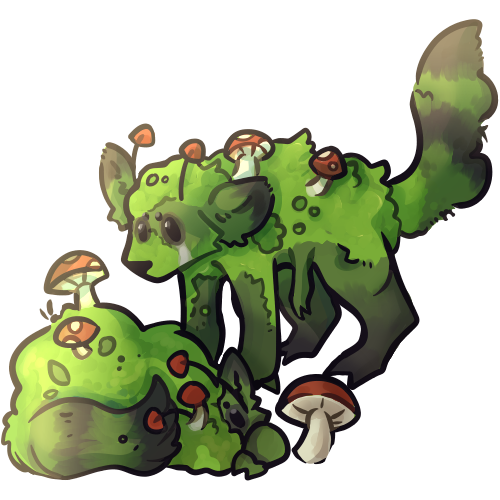 “I'm telling you I just saw this- this creature! It was just right here where this little grass mound is.Hmm,anyways do you think these shrooms are good?” — An E-class notail about to ruin his day.

Attack Method: Bloomins always will resort to hiding or camouflaging before attempting anything else,even if it is not very practical. Though if cornered,they will stand up and try to claw any attackers.

[Cautious] Neutral trait
This character will be more nervous of suspicious situations, and less willing to take risks. They may put extra effort into making sure everything is safe before feeling comfortable. While this normally makes things safer for them, it can also be a huge time waster.
[X camoflage] Positive trait
This character is incredibly hard to see while on a specific (X) type of terrain. When camouflaged they can move around very stealthily.
[Easily Startled] Negative trait
This character is easily scared by various things such as loud noises, bright lights, or even their own thoughts about what might be up ahead. Not only does this character lose morale and sanity faster then most, they'll likely freeze up when a startling event happens.

Bloomins are not know for belief in gods though it wouldn't be uncommon to find one that worships one.

Bloomin are short, stocky quadruped creatures with four eyes. They have a long tail and two sets of arms. The bigger pair is clawed and used for everything from walking, climbing and digging. The smaller set of arms are used to hold any food gathered or young close to their body. While quadrupedal they are noted to be able to stand on their legs and to even walk for short amounts of time, mostly scouting for danger.

They have a plant-like cloak upon their backs that grows grasses, flowers, fungi, and even nubs that look like rocks. A bloomin will give birth to one to four cubs at a time. Tightly curled up in their cloak these babies appear as little moss balls carried around by their parents. When the current caretaker is scavenging for food they will leave the cubs in burrows or under tree roots. When older they will often ride on the parent's back, watching and learning how to scavenge. By this time they will start to sprout their own mushrooms on their back as the cloak grows.

When old enough they will go off on their own but usually stay close enough in family circles, visiting frequently.

Bloomin are known to be very private and shy creatures. They will hide away from any newcomers or threats by easily camouflaging into their surroundings. It would take a lot of patience to try and befriend a bloomin due to this reason. In their family circles, they are very caring, loving, and will share all their food even if they don't have much to give.

If one does befriend a bloomin they will become clingy and very curious to learn new things about the person. They will also try to offer up their mushrooms in a gift-giving manner, almost to a forceful extent when not taken. If not accepted they will become quite upset and sullen until it is accepted, or they forget. When eaten most species will become sick for days, though plant or fungi species will grow a mushroom.

When a bloomin becomes sick or wounded they become, act bizarrely, often described as seemingly "mind controlled." In this state they will purposely leave their hiding spots and wait to be eaten or die. With glazed-over eyes, they won't respond to outside stimuli and will have to be forced to move. If eaten the shrooms will spread onto a new host. On the other hand if they die naturally their own the corpse will be riddled with more and more shrooms while they decompose, creating a delightful looking platter to an unsuspecting onlooker.

There is not much to note about the history of bloomins as they never reached written lanaguge. Most of their history has been passed down orally as tales and stories, ranging from great bloomins who fended off creatures to small clans that went off into the dark reaches of the planet to survive. One major story used to scare little cubs into behaving involves a great being only known as "The Dawn."

While godlike in their tales, the bloomins stress this creature stood upon the same "realm" as they did. Huge and imposing, the monster stuck its long talons into the ground, injecting a thick liquid inside, one that made the land uninhabitable for the bloomins. It hated the bloomins more than any other creature, and upon seeing one would make sure to poison the land. Children's know that when danger appears it is better to hide, for no harm can come to someone who might as well not exist.

The story is so ingrained into the culture that even adults still fear this monster of death.

Cordamins: This species is known for its aggressive and feral-like tendencies. They are much larger than their smaller counterparts, almost twice as big. They have a giant cap on their head and are much more muted in coloration than their counterparts, especially their pelts. Their size allows for larger plants, such as bushes to grow. With very long claws and a bundle of shrooms on their tail, they're utterly feared by other bloomins.

The mushroom infection has overtaken them to the point that the giant caps on their heads leave them blind. They will stay on the ground and bury themselves, leaving their caps and tail above the ground to lure in prey. If one spots such a display it is best to back away and run.

The Giving Shroom: As previously noted above, once friendly enough they love sharing and giving their shrooms. Depending on the species consuming it will either cause illness or fungi growth.

• Bloomins are very good at tending to plants and gardens. Some will even grow new flowers and plants right on their cloaks.

• They often just prefer a nice bed of dirt over any luxury items. Even if presented with a nice home or room they will still make it more homely and dump dirt everywhere. They're not exactly the cleanest of species but they're so cute!

-Back to Species Menu-
< Bivouac
Bogemn >