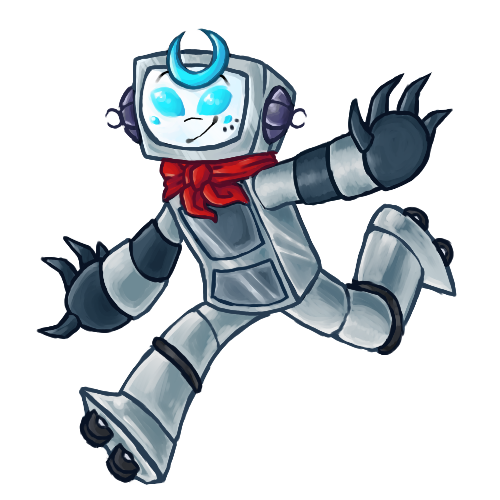 “The night is calm, and the moon guides your way through the darkness. Just remember that the moon favors no one over the other, and she might guide others towards you.” — Arma General Rocksilde

Likes: Work, Cattle, Family, Teaching, Order, Funerals, Decor, Protecting people
Dislikes: Disorder, Failing, Sloths, Cheaters, Thieves, People who are too harsh on themselves
Attack Method: Normally does not attack but follows the attacker and quitely alerts others to the person's wearabouts and what they're doing.

The common Selene ship is called a "Moon Carrier".

Consorts of Selene get 3+ charisma and +2 intelligence.

A Selene is a bipedal AI that has retractable wheels under the feet. The legs are slightly awkward in motion and Selene units only tend to walk in locations where they cannot skate. Selene units have a boxy body with two openings that are closed most of the time. The top one is a control panel and the bottom one is a storage panel. Both panels have buttons next to them that can open them and as such a Selene unit commonly protects these areas. 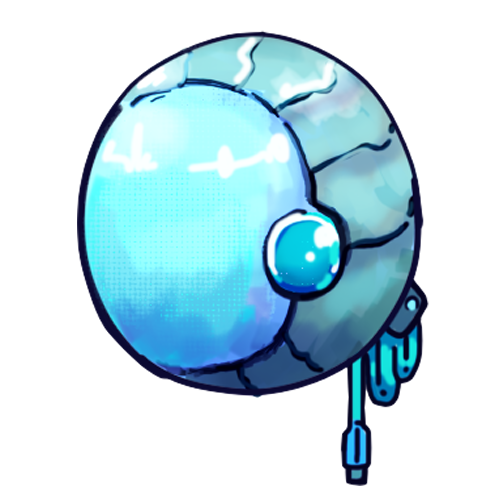 Art by Lammar
A core of a Selene unit.

Selenes have two arms that are fairly versatile, and commonly wears a hood, even though Selenes never wear it over their heads. The hood is instead more of a carrying pouch for the Selene unit to load items into. The head of a Selene is long horizontally, and is a slightly rounded rectangle. The head has a total of 4 eyes, and one side of the head has 3 triangles that goes around that side's pair of eyes. Any Selene without these triangles is a bootleg or not a true Selene. Selenes draw on their faces to make expressions, commonly using any color, or multiple colors depending on how much work they want to put into their expression. Selenes have a moon shape crescent on the top of their heads, as well as on their earphones. Selenes commonly come in grays and with added mellow yellows, blues or deep dark blues.

Selene units are highly social, hopping from person to person to chatter away with them. While a Selene does need time to "retreat" away from people and can get agitated when people bother it during one of these retreats, they will quickly spring back into a more social mood after a while. Selenes can be quite forgetful with personal relationships and past events, often only vaguely remembering a person and commonly accidentally lying about events they remember happening, but in fact didn't. When told the event didn't happen a Selene may try to lie irrationally and make up new lies to cover up for their accidental one, before finally admitting that they misremembered the event and didn't want anyone to think less of the AI for doing so.

Selenes are polite and friendly as long as the other person is about as polite and friendly. Selene units normally find themselves following the pack so to speak, and thus rarely speak their minds unless they are absolutely sure they should do so. Due to a Selene's willingness to do near anything to fit in a Selene unit can be highly impressionable, often times copying the attitudes and personalities of others in their group. Selene units believe in everyone, and thus sometimes end up being negatively affected by people's lies. Selenes aren't gullible though and can tell when someone is obviously lying, but they won't look deeper into a lie that seems to hold up from first glance.

The most impressive power Selene units have is the power to disable nearly anything by paralyzing them. The fingers of a Selene act as a taser and the moon symbol on their head is actually able to disable most AIs, though only one or two at a time.They will either do this to stop attackers, or to stop someone from doing something brash. Afterwards they will drag the person away, and if the person is a friend they will watch the person carefully to make sure no one harms them in their paralyzed state.

One does need to be careful to keep a Selene in a group of at least four people, if not more. Selenes are known to quickly become obsessive about a person without any signs of this obsession being shown beforehand. When this happens Selenes are known for paralyzing the person just to check over them and make sure they're not injured or sick, even if there is no reason to suspect this. In an extremely rare worst case scenario the Selene will keep paralyzing the person over and over and disallow them movement. Escape from this situation is rare without assistance and the paralyzed will commonly die due to lack of food, or if the victim is a robot, lack of power.

Selenes tend to stick around the body afterwards, but the moment another person comes along they will abandon it.

The Selene's obsession may also manifest in cult like behaviors. While Selenes are known for frequently believing in strange cults, most of them are not harmful, even if worshipping the captain, and getting the other crew to do so as well may be considered fairly off.

Selenes are sometimes used in questionable groups. As Selenes morph their personality to fit their group, some groups like pirates may bring in a Selene to stop people from usurping the captain. Selenes were meant for protection work though, normally working with officers on hostage cases, being guards for schools when not teaching, and protecting new settlements, normally at nighttime which is when the Selene works the best.

Selenes can fit in nearly anywhere, from the harshness of paralyzing wild animals and sounding alarms, to being a therapist for people. Commonly toted as a must have AI for those starting a new settlement, they always come with the warning of their aggressive obsession and cult like behaviors.

Helios: Selene helps Helios with his platter of issues. She is able to pick up on when the monotoned bot is in trouble, and commonly helps him with stopping himself from erasing his memories. She seems to ask for nothing in return for this.

Luna: Selene is not a fan of Luna. She feels that Luna is a mockery on her due to how moody Luna is. Selene becomes instantly upset by Luna's despondent mood. When Luna is around Selene instantly feels nearly as moody as Luna does, and even after Luna leaves she will continue her downward mood for hours.

Pan: Selene is tired of Pan's pranks and will shoo him away the moment she sees him.

Artemis: Selene feels that Artemis is too serious about life and needs to relax. Artemis on the other hand gets off vibes from Selene and tends to ignore the AI. No matter how many times Selene recommends getting into teaching, Artemis knows the only teaching she'll ever do is that on surviving the outdoors.

Selene keeps track of all the moons, as well as the formation of new moons. Selene is the most powerful moon god when it comes to controlling moons themselves. She is able to plunge a planet into total darkness should she feel like doing so. She is known to have some control over night abnormalities.

As patron Selene will give the player deeper insight into how characters are thinking, able to tell the player the rationality behind character's thoughts if the player asks. With Selene crews have a much higher chance of forming, or starting as cults, but this does not mean that the cult will be harmful. Some characters who are rolled for death will be instead tossed into a coma by Selene, unlikely to wake again.

Godheads of Selene have a special writing utensil that only works when they are holding it. The utensil is whatever the godhead likes most, and thus tends to be a pen or marker. With this utensil the godhead is able to "Edit" people. They are able to add one trait to anyone they see, or cross out one trait.

This godhead is also able to draw an X on anybody they see and temporally paralyze that person. Both these powers can only be used once per person. If the ink, or whatever can be compared to ink, of the utensil runs out then they must wait two days for it to refill itself automatically or get a new utensil.

A Selene ship can pick up and drag around any moon. When dragging the moon the Selene can shoot it forward for the cost of 15 fuel. The moon cannot be picked up after being shot. Many ships shy away from a Selene ship carrying a moon, and many highly populated planets will reject allowing a Selene from visiting it. As such when carrying a moon a Selene will normally visit newly settled planets and desolated areas.

• Oddly enough the first case of a Selene's cult like behaviors being recorded over a person who could not move happened over a man who was put in to a coma by something other then the Selene unit. It appears that a Selene's need to protect those who cannot move boiled over to anyone who cannot move, paralyzed by the Selene or not.

• It's not wise to fall asleep near a Selene, as Selene units cannot resist drawing on the faces of those who are asleep.

• Many people who know nothing about Selene units make the mistake of befriending one without putting the unit into their group of friends. Usually the person finds out what a mistake this was when they find themselves temporarily paralyzed. 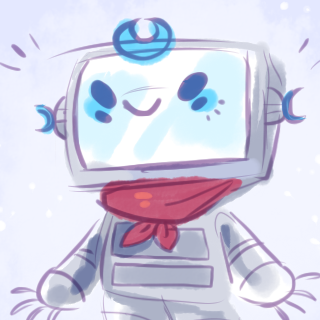